Accessibility links
1 World Trade Center Claims Spot Atop NYC's Skyline : The Two-Way Workers added a steel column this afternoon, making the skyscrapere 21 feet taller than the observation deck at the Empire State Building. That's a symbolic return to the sky for a site destroyed in the Sept. 11, 2001, terrorist attacks.

With the addition of some steel columns, 1 World Trade Center has reached a height of symbolic importance. 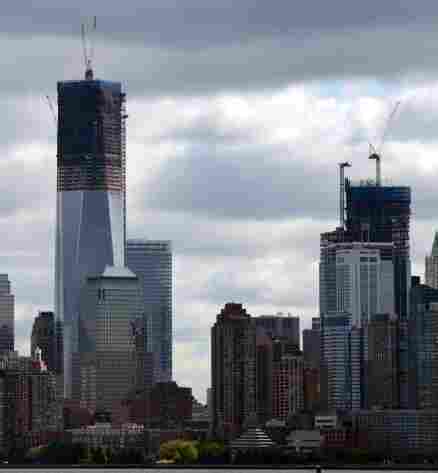 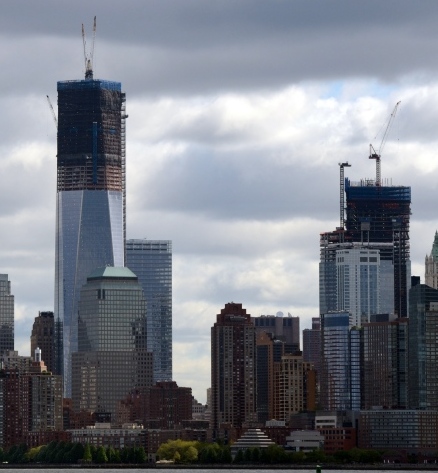 At 1,271 feet (and growing) it is 21 feet taller than the observation deck on the Empire State Building.

So, for the first time since the Sept. 11, 2001, terrorist attacks that destroyed the North and South towers of the World Trade Center — killing more than 2,700 people — a skyscraper at the tip of Manhattan is arguably taller than the famous midtown landmark.

We only say arguably because if you count the antenna atop the Empire State Building, that skyscraper is 1,454 feet tall, as the New York Post shows.

Once 1 World Trade Center reaches its full height, however, there won't be anything left to debate. Within a few months, The New York Times says, it will reach "1,368 feet at its rooftop parapet, identical in height to the first 1 World Trade Center. ... The ultimate topping out will be the completion next year of an antenna that will bring the structure's overall height to 1,776 feet."

Update at 2:14 p.m. ET. The First Column Is In Place: As the live feed from atop 1 World Trade Center shows, workers have just put the first of the new steel columns in place, which gives the skyscraper it's new bragging rights.

Update at 2:06 p.m ET. Another View: CNN is streaming video from a camera that looks to be atop the skyscraper.

Update at 2 p.m. ET: MSNBC is streaming from the 71st floor of the building, where Port Authority officials are about to hold a news conference.