Accessibility links
Obama In Afghanistan On Surprise Visit : The Two-Way One year to the day after announcing to the world the death of al-Qaida leader Osama bin Laden, President Obama has arrived in Afghanistan. He will beam back a televised message to Americans later today.

Obama In Afghanistan On Surprise Visit

Obama In Afghanistan On Surprise Visit 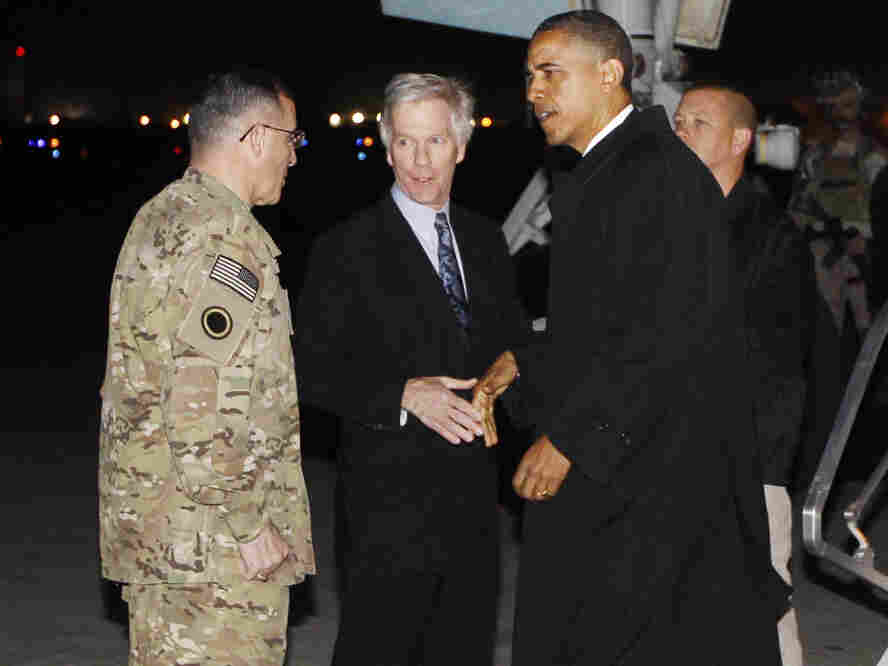 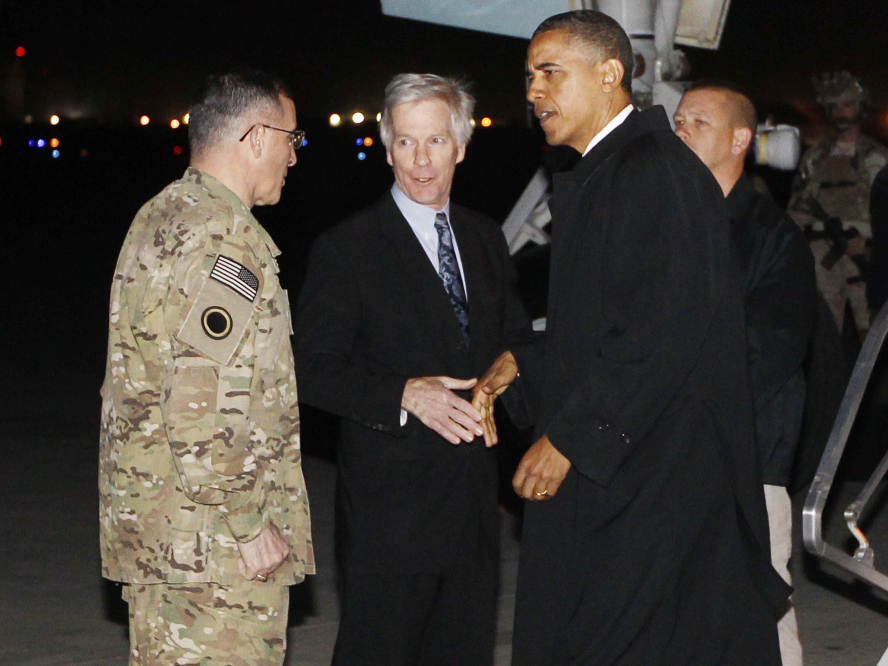 President Barack Obama is greeted by Lt. Gen. Curtis "Mike" Scaparrotti, and U.S. Ambassador to Afghanistan Ryan Crocker as he steps off Air Force One at Bagram Air Field in Afghanistan earlier today (Tuesday, May 1).

One year to the day after announcing to the world the death of Osama bin Laden, President Obama is in Afghanistan, the nation from which the al-Qaida leader and his followers planned and organized the Sept. 11, 2001, terrorist attacks.

The news of the president's unannounced trip was confirmed just before 3 p.m. ET. Obama is scheduled to deliver a televised address aimed at Americans this evening at 7:30 p.m. ET.

On the president's agenda while in Afghanistan: A meeting with Afghan President Hamid Karzai at which they will sign the newly negotiated U.S.-Afghan security agreement that lays out the nations' relationship after the withdrawal of U.S. and coalition troops in 2014.

As with other trips that presidents Obama and George W. Bush (and other top U.S officials) have made to Afghanistan and Iraq in recent years, Obama's visit was kept secret until he was on the ground and in a secure location. He's traveling with key aides and security personnel, of course, but with just a small "pool" of journalists. Details of his departure have also been kept quiet.

The president paid a similar surprise trip to Afghanistan in December 2010. He was supposed to meet with Karzai then, but bad weather kept Obama on the ground at Bagram Air Field north of Kabul. He paid a surprise visit to Iraq in April 2009.

We'll have more as the news develops.

We will live blog the president speech on a separate post. Join us there.

Backing up a bit, here are a few more highlights from Obama's speeches in Afghanistan:

-- During the signing ceremony, Obama said he was in Afghanistan to mark a "historic moment" on Afghan soil and to look forward to a "future of peace and security and greater prosperity for our nations."

-- Obama said the United States is committed to Afghanistan and respects the country's sovereignty. "I'm confident the future before us is bright," he said.

-- The president did acknowledge the killing of Osama bin Laden in his speech to troops. "A year ago, we were able to bring Osama bin Laden to justice," Obama said, adding that the raid would not have been possible if not for the work of the American troops.

"Together you guys represent what is best in America," Obama said.

President Obama told U.S. troops in Afghanistan that there is "a light on the horizon because of the sacrifices you've made."

Obama made the comments at Bagram Air Base, saying that times are "still tough," and that there will still be "heartbreak, pain and difficulty ahead."

But, the president said, "when you get home we are going to be there for you."

President Obama spoke to the troops shortly after signing the strategic partnership agreement at Afghanistan's presidential palace. Before signing Obama said he was confident Afghans understood that the United States would "stand with them."

"Afghanistan has a friend and partner in the U.S.," he said.

According to The New York Times' Mark Landler, who is in the "pool" of journalists traveling with Obama:

" 'Excellent,' Pres Obama says, after he and Hamid Karzai sign the strategic partnership agreement in Kabul."

According to Gerstein of Politico, "Karzai and Obama are expected to deliver statements at the Presidential Palace shortly. ... Senior administration officials said the timing of the trip was driven by the negotiations over the strategic partnership agreement and by the desire of both presidents to sign the agreement in Afghanistan prior to the NATO summit in Chicago later this month. However, the officials also acknowledged that the timing coincides with the first anniversary of the U.S. raid that killed Osama bin Laden. Obama is expected to mention the bin Laden raid in the televised address Tuesday evening, officials said. Before delivering the address, Obama is expected to meet with and make a speech to US troops stationed at Bagram."

Politioco's Josh Gerstein, one of the "pool" reporters on the trip, writes that:

"Senior administration officials said the unconventional timing of events on the trip, such as the scheduled midnight local time signing ceremony, was aimed at allowing Obama to address Americans on a schedule convenient for U.S. television audiences. That speech, expected to run about 10 minutes, is scheduled to take place just after 7:30 p.m. ET Tuesday, which is 4 a.m. here in Afghanistan.

"Of course, the middle of the night schedule also provides the added security of darkness for the arrival and departure of [Air Force One] and flights by helicopter from Bagram to and from a landing zone near the presidential palace. While U.S. officials insist security has improved significantly since the U.S. troop buildup Obama ordered at the end of 2009, there have been a series of troubling incidents in recent months including riots relating to the Quran burning episode, Afghan-on-U.S. troop violence, and a protracted gun and RPG battle in Kabul's embassy district just over two weeks ago."

Update at 3:05 p.m. ET. President Will Address The Nation Tonight:

According to one of the first "pool reports" from journalists traveling with the president, Obama left Andrews Air Force Base near Washington, D.C., at 12:09 a.m. ET and arrived at Bagram around 10:20 p.m. local time (1:50 p.m. ET). He has since traveled by helicopter into Kabul for his meetings with Karzai. Obama will address Americans tonight from Bagram Air Base, at 7:30 p.m. ET.