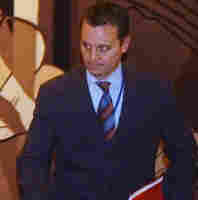 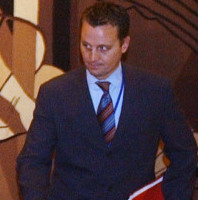 The New York Times reports Grenell's abrupt resignation comes after he came "under attack by antigay activists in the party."

The Romney campaign cofirmed his resignation saying they were "disappointed" Grenell had resigned for "personal reasons."

"We wanted him to stay because he had superior qualifications for the position he was hired to fill," Romney's campaign manager Matt Rhoades said in a statement.

"I have decided to resign from the Romney campaign as the Foreign Policy and National Security Spokesman. While I welcomed the challenge to confront President Obama's foreign policy failures and weak leadership on the world stage, my ability to speak clearly and forcefully on the issues has been greatly diminished by the hyper-partisan discussion of personal issues that sometimes comes from a presidential campaign. I want to thank Governor Romney for his belief in me and my abilities and his clear message to me that being openly gay was a non-issue for him and his team."

"Pieces in two conservative publications, the National Review and Daily Caller, reflected the uproar by some social conservatives over the appointment.

"In the National Review, Matthew J. Franck wrote late last week: 'Suppose Barack Obama comes out — as Grenell wishes he would — in favor of same-sex marriage in his acceptance speech at the Democratic National Convention. How fast and how publicly will Richard Grenell decamp from Romney to Obama?'"

Grenelll was also in the news because he had posted and then deleted tweets that expressed some pointed opinions about Hilary Clinton and Michelle Obama among others.