Accessibility links
Chinese Activist Wants To Leave With Clinton; U.S. Diplomats Back In Touch : The Two-Way Chen Guangcheng now says he fears for his family's safety and that he wishes he hadn't left the U.S. embassy on Wednesday. American officials are trying to help, but it's not clear what they can do.

Listen
Chinese Activist Wants To Leave With Clinton; U.S. Diplomats Back In Touch

Chinese Activist Wants To Leave With Clinton; U.S. Diplomats Back In Touch

The fate of Chinese legal activist Chen Guangcheng remains uncertain one day after he left the U.S. embassy in Beijing. 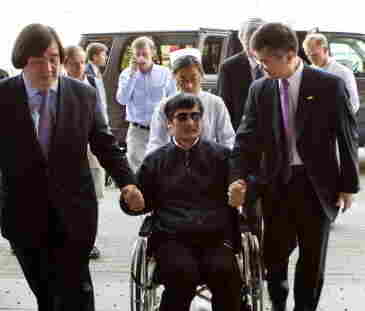 Chinese activist Chen Guangcheng (in wheelchair) held the hand of Gary Locke (at right) the U.S. ambassador to China in Beijing as he arrived at a hospital in Beijing on Wednesday. AFP/Getty Images hide caption

Chen is telling news outlets that he fears for the lives of his family members and that he wants to leave China with Secretary of State Hillary Rodham Clinton when she's done with high-level talks now being held there. "My fervent hope is that it would be possible for me and my family to leave for the U.S. on Hillary Clinton's plane," he told The Daily Beast from the hospital where he's recovering from injuries suffered during his flight from house arrest on April 22.

Meanwhile, NPR's Michele Kelemen reports that U.S. diplomats are back in touch with Chen and are trying to determine exactly what he wants and whether they can be of any help. Since Chinese officials have already demanded an apology from the U.S. for its alleged interference in China's internal affairs (by giving Chen sanctuary in the embassy), it's not clear what, if anything, the U.S. could do.

The situation, as The Washington Post says, has turned what were supposed to be talks aimed at "smoothing relations with China and increasing economic and cultural ties" into "a diplomatic drama."

Chen, who is blind and has taught himself the law, has been on the outs with Chinese authorities in recent years because of his work exposing policies on forced abortions. After his escape from house arrest, a video of Chen was posted on YouTube. In it, he calls on Premier Wen Jiabao to punish those responsible for his house arrest and the beatings he says he and his family have endured over recent years.

When he left the U.S. embassy Wednesday, U.S. officials said they had been assured by Chinese authorities that Chen would be allowed to live freely and study the law at a university.

But within hours, he was telling reporters that he regretted taking that deal. Chen told NPR earlier today that if he had known about the hardships still facing his family, he would not have left the embassy:

"I can't get in touch with my family in my village at all," he said. "I don't know what's happened to my mother. There are guards inside the yard, in all the rooms, even on the roof. They've set up lots of cameras in my home, and are preparing electric fences. They told my family they'd take wooden sticks and beat my family to death, so it's very unsafe."

He also said, as NPR's Louisa Lim reported, that he feels the U.S. pressured him to leave the embassy.

Gary Locke, the U.S. ambassador to China, says Chen made the decision to leave. Locke told reporters that as Chen was preparing to depart the diplomatic compound, he asked the activist if he was sure that was what he wanted to do. Chen said yes, according to Locke.

"I can tell you unequivocally that he was never pressured to leave, he was excited and eager about leaving when he made his decision," Locke told reporters earlier today. "He also fully knew of what would be — of what staying in the embassy would entail if he decided not to leave. And he was fully aware of and talked about what might happen to his family if he stayed in the embassy and they stayed in the village in Shangdong Province."

As NPR's Andrea Seabrook tells our Newscast unit, the activist spoke to a session of the Congressional Executive Commission on China today by telephone from his hospital room. A hearing witness held an iPhone to the podium microphone and translated.

"He says he wants to come to the U.S. for some time of rest," the translator told the committee. "He has not had any rest in the past 10 years already."

Chen also said he wanted to meet with Clinton to "get more help from her" and "thank her face-to-face."