Accessibility links
Scientists Estimate Dinosaurs Passed Enough Gas To Warm Up The Planet : The Two-Way Their flatulence and burps were more than four times that of modern-day cows, scientists estimate. 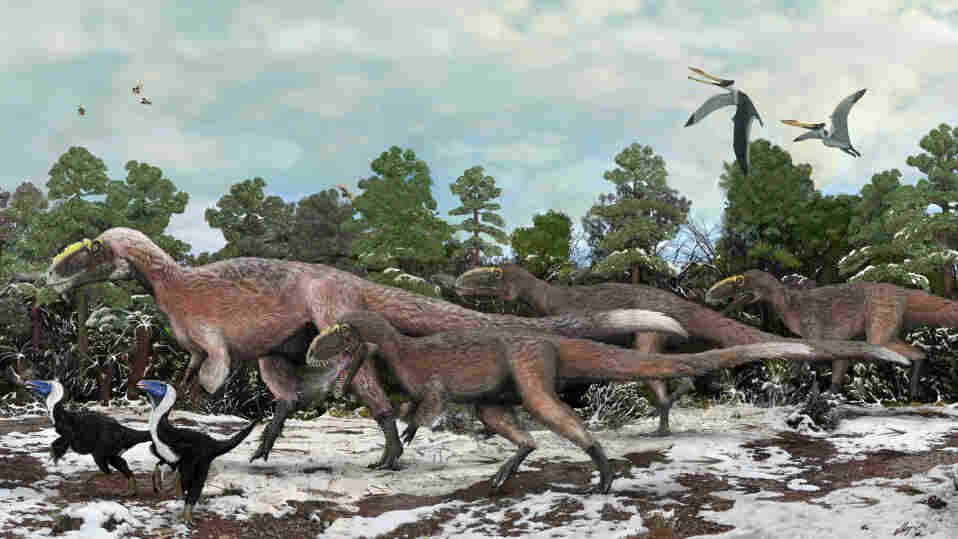 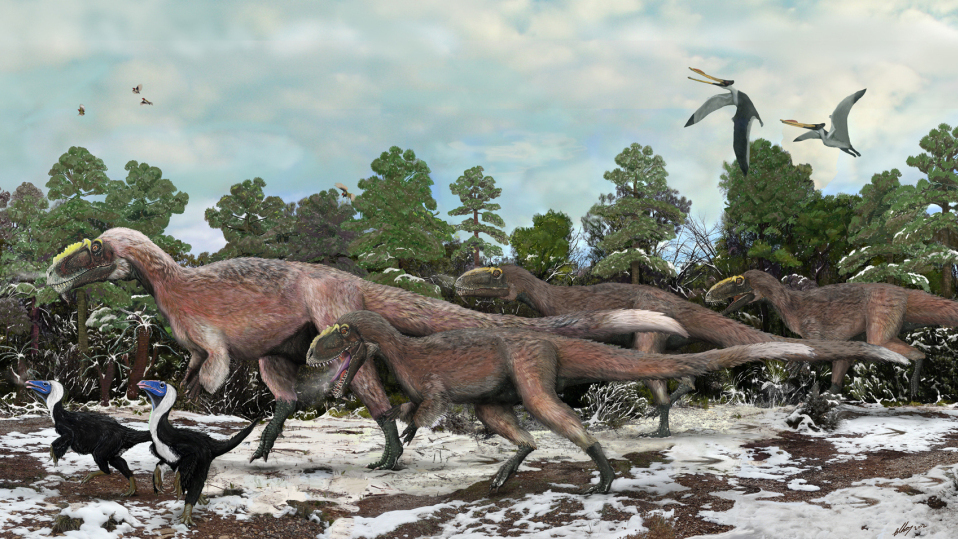 An artist's impression of a group of Yutyrannus. The 30-foot-long dinosaurs were covered with downy feathers — likely to keep the animals warm.

The early reporting of the story had a undeniably alluring narrative: Scientists say dinosaurs passed so much gas, they affected climate enough to cause their demise. That's how Fox News and the Daily Mail, one of the first to move the story, framed this latest research.

As it seems is always the case, though, a closer reading of the study released in the journal Current Biology reveals the reporting is just hot air.

The AP has the right idea when it reports:

"A new study suggests that dinosaurs may have helped keep an already overheated world warmer with their flatulence and burps 200 million years ago."

So the dino-killing asteroid is still the leading theory for their demise, but their farts, which this study found amounted to 520 million metric tons a year and 2,675 liters a day, were "a key factor in the warm climate 150 millions years ago," the BBC reports.

Paul Myers, a biology professor at the University of Minnesota Morris, set the record straight on his blog Pharyngula.

"No, dinosaurs did not fart themselves to death," he says, adding that he read the paper in full:

"The researchers didn't say that at all. There is nothing about extinction in the paper; it would have been ridiculous and I was prepared to dismiss such a claim without even reading the paper (the Jurassic lasted 55 million years, the Cretaceous 80 million, with dinosaurs farting away throughout). But the paper makes no such claim, instead suggesting that the mass of herbivores during the Mesozoic would have made a substantial, but stable, contribution of greenhouse gases to the atmosphere that may have been partially responsible for the warmer, moister climate of the era and the greater primary production."

The AP has this final warning:

"Outside climate experts say the study makes some sense, but that the warming from dinosaur gas back then is dwarfed by man-made carbon dioxide today from industry."