Accessibility links
President Obama: Same-Sex Couples Should Be Able To Wed : The Two-Way The president made the declaration in an interview with ABC News. 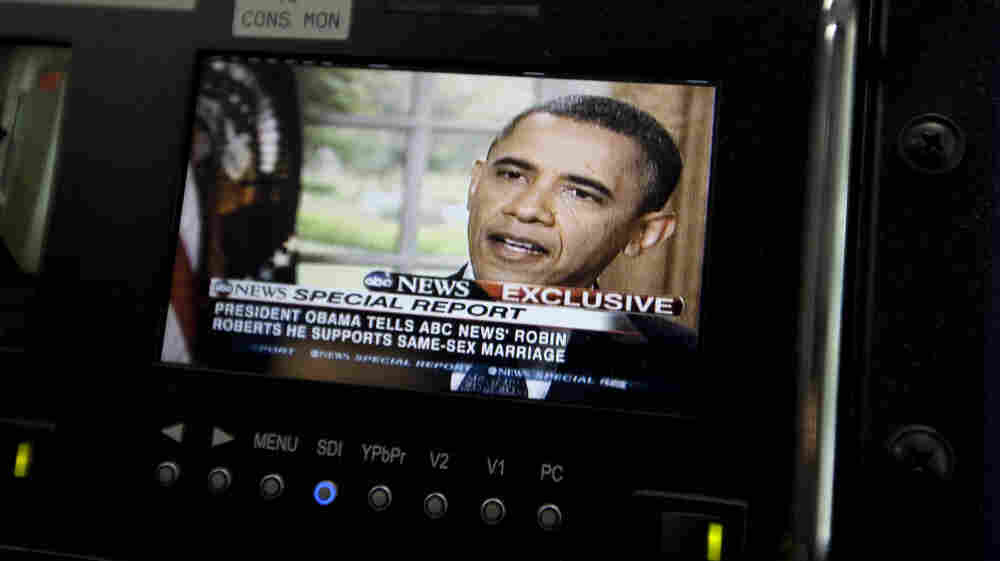 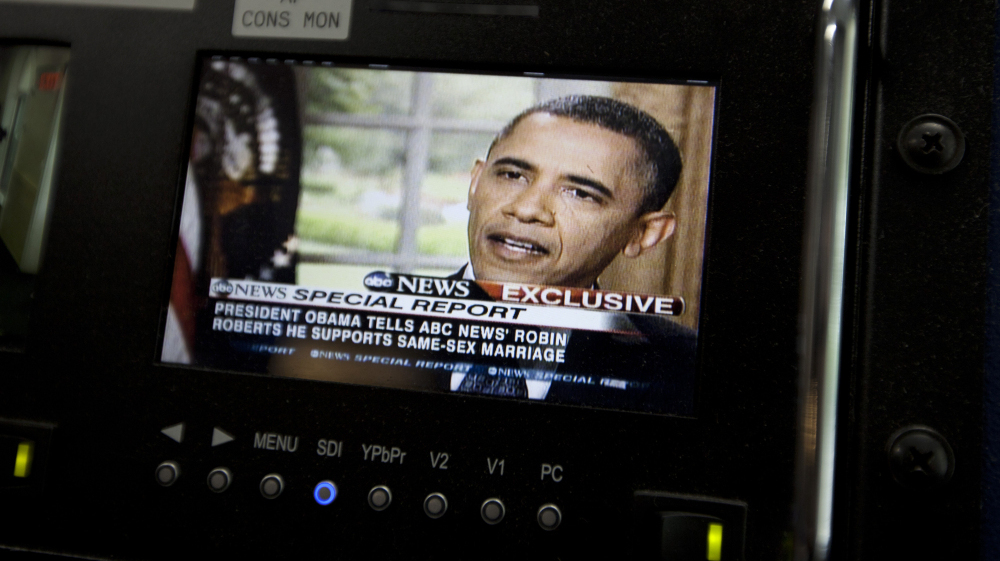 In an interview with ABC News, President Obama declared his support for gay marriage. This marks a departure from the president's previous stance, which has repeatedly been described as "evolving."

"I have to tell you that over the course of several years as I have talked to friends and family and neighbors when I think about members of my own staff who are in incredibly committed monogamous relationships, same-sex relationships, who are raising kids together, when I think about those soldiers or airmen or marines or sailors who are out there fighting on my behalf and yet feel constrained, even now that Don't Ask Don't Tell is gone, because they are not able to commit themselves in a marriage, at a certain point I've just concluded that for me personally it is important for me to go ahead and affirm that I think same sex couples should be able to get married."

In the interview with ABC's Robin Roberts, the president also said where Americans stand on gay marriage depends on their generation.

"You know, Malia and Sasha, they have friends whose parents are same-sex couples," the president said. "There have been times where Michelle and I have been sitting around the dinner table and we're talking about their friends and their parents and Malia and Sasha, it wouldn't dawn on them that somehow their friends' parents would be treated differently. It doesn't make sense to them and frankly, that's the kind of thing that prompts a change in perspective."

The interview comes about a week after Vice President Joe Biden said he supported gay marriage on Meet The Press. That put the president's own position in the spotlight.

The Log Cabin Republicans, a group of GOP members who support gay rights, say the president's announcement is a "a day late and a dollar short."

"Log Cabin Republicans appreciate that President Obama has finally come in line with leaders like Vice President Dick Cheney on this issue, but LGBT Americans are right to be angry that this calculated announcement comes too late to be of any use to the people of North Carolina, or any of the other states that have addressed this issue on his watch," R. Clarke Cooper, Log Cabin Republicans Executive Director, said in a statement.

Good Morning America has added a little bit more of Obama's interview. He gave this answer when he was asked about first lady Michelle Obama's role in his decision:

"This is something that, you know, we've talked about over the years and she, you know, she feels the same way, she feels the same way that I do. And that is that, in the end the values that I care most deeply about and she cares most deeply about is how we treat other people and, you know, I, you know, we are both practicing Christians and obviously this position may be considered to put us at odds with the views of others but, you know, when we think about our faith, the thing at root that we think about is, not only Christ sacrificing himself on our behalf, but it's also the Golden Rule, you know, treat others the way you would want to be treated. And I think that's what we try to impart to our kids and that's what motivates me as president and I figure the most consistent I can be in being true to those precepts, the better I'll be as a as a dad and a husband and, hopefully, the better I'll be as president."

During a stop in Oklahoma City, Mitt Romney, the presumptive Republican nominee for president, reaffirmed his position that marriage should be between a man and a woman.

He acknowledged that the issue was a "tender" and "sensitive" one but said that he has the same view "I've had since running for office."

As we noted earlier, one of the big questions is how this pivot by the president will play in November. It's a political gamble for sure. Over at the Washington Post, Chris Cillizza writes that on plus side, this move may re-ignite Obama's base and bring young people, who had such a huge effect in 2008, to the polls. On the negative side, this could shrink Obama's support from the black community and could hurt his chances in Virginia and North Carolina, two hugely important states.

Joe Solmonese, president of the Human Rights Campaign, which advocates for gay rights, says that this decision won't make much difference politically.

"I think at the end of the day, this election will continue to be about the economy and about economic struggles we all face," Solomese told our colleague Liz Halloran. "As all contests like this, it will also be a question of character. What the president demonstrated today is that he is a person of deep conviction."

Mark Knoller, White House correspondent for CBS Radio, says on Twitter that Obama administration officials say this won't be a "cornerstone" of the president's campaign and "don't think it will have a bearing on the outcome."

That's certainly not what Tony Perkins of the Family Research Council, which advocates for a Christian organization that advocates for a traditional family unit, told NPR's Liz Halloran.

"What everyone said was not going to be an issue in this election is now an issue," Perkins said. "The president has made it an issue. this provides a very clear contrast between him and Mitt Romney. I think [Romney] may have been handed the key to support from social conservatives. Obama just turned up the heat and intensity."

"While President Obama has played politics on this issue, the Republican Party and our presumptive nominee Mitt Romney have been clear. We support maintaining marriage between one man and one woman and would oppose any attempts to change that."

According to the latest Pew Research Center for the People & the Press, Americans are almost evenly divided on the issue.

"46% favor allowing gays and lesbians to marry legally, while 44% are opposed," Pew reports.

National opinion, however, has been shifting in favor of gay marriage. Perhaps indicative of that fact: When ABC News cut in to its programming to deliver the news, they interrupted a segment featuring Tim Gunn, a gay TV fashion guru. When NBC interrupted its programming to deliver the news, it cut into the Ellen Degeneres Show. Degeneres is also gay.

Note we've added audio of the two-minute clip released by ABC News at the top of this post. The rest of the interview is set to air on ABC World News tonight and tomorrow morning on Good Morning America.

"I think that the president spoke from his heart, from a place of common humanity," Solomese said. "His words give a great deal to give hope to LGBT Americans that, as he has always said, he sees them as a part of the American fabric. The leadership of the president, the words of the president, his coming out in support of an issue as important as marriage equality, and around which many are still struggling, still on a journey, will help those people."

Update at 3:17 p.m. ET. North Carolina And The General Election:

This policy shift from the president was also made more dramatic because of yesterday's vote in North Carolina, which changed the constitution making all gay unions illegal.

It was a rare occasion where African Americans and Republicans voted on the same side of an issue. It's something that will almost certainly come into play during the November election.

The big question is, of course, whether this position by the president will erode his overwhelming support from African Americans.

ABC has posted a two-minute video on its website. In it Obama says that he has always "stood on the side of broader equality" for gay community. For a long time, he said, he thought that civil unions would be enough. But, now, that view has evolved, Obama said, and he now believes same sex couples should be allowed to get married.