Accessibility links
President Of Abortion Rights Group NARAL Will Step Down In January : The Two-Way Nancy Keenan said it was time for a younger leader to close the "intensity gap" in younger voters.

President Of Abortion Rights Group NARAL Will Step Down In January

President Of Abortion Rights Group NARAL Will Step Down In January

The President of NARAL Pro-Choice America, the nation's oldest abortion rights organization, will step down in January, the group said today. 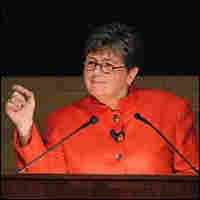 In a statement, Nancy Keenan said she would focus her last eight months "on helping pro-choice candidates win elections."

But perhaps most interesting is what she told The Washington Post's Ezra Klein, who broke the news.

Keenan said that she's worried about the "intensity gap" in the younger, pro-choice generation. Basically, she said, they may not view abortion as a "crucial political issue," and they need younger leaders to correct that. Keenan said she wants to step down before she exacerbates the problem.

"There's an opportunity for a new and younger leader," Keenan told the Post. "Roe v. Wade is 40 in January. It's time for a new leader to come in and, basically, be the person for for the next 40 years of protecting reproductive choice."