Accessibility links
'Mama Bird' Evelyn Johnson Dies At 102; Logged 7 Years Of Flight Time : The Two-Way Evelyn Bryan Johnson, a record-setting pilot who was born just six years after the Wright brothers made their historic flight, has died at the age of 103. 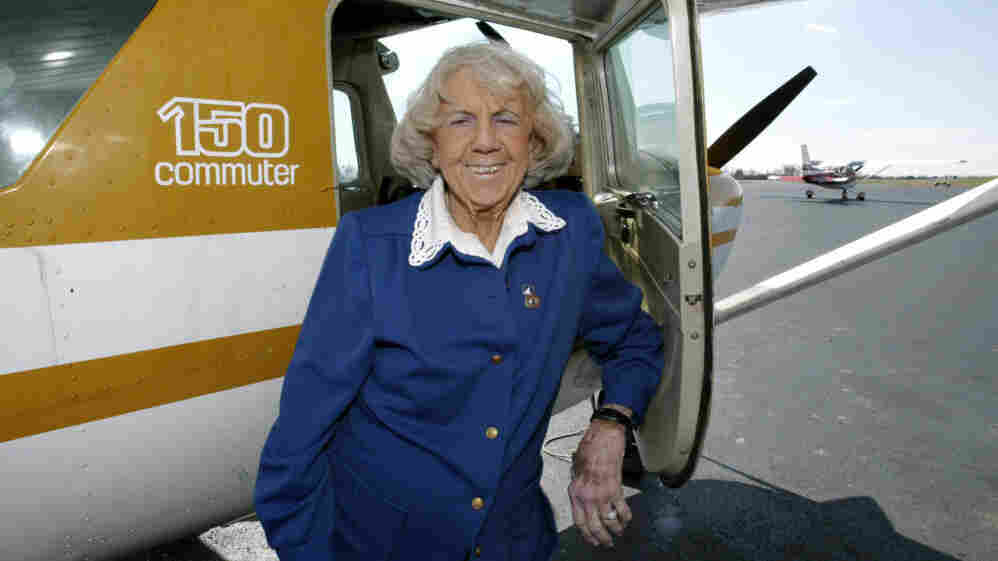 Evelyn "Mama Bird" Johnson poses by at the airport she managed in Morristown, Tenn., in this 2005 file photo. Johnson, who began flying in 1944, died Thursday. Wade Payne/AP hide caption 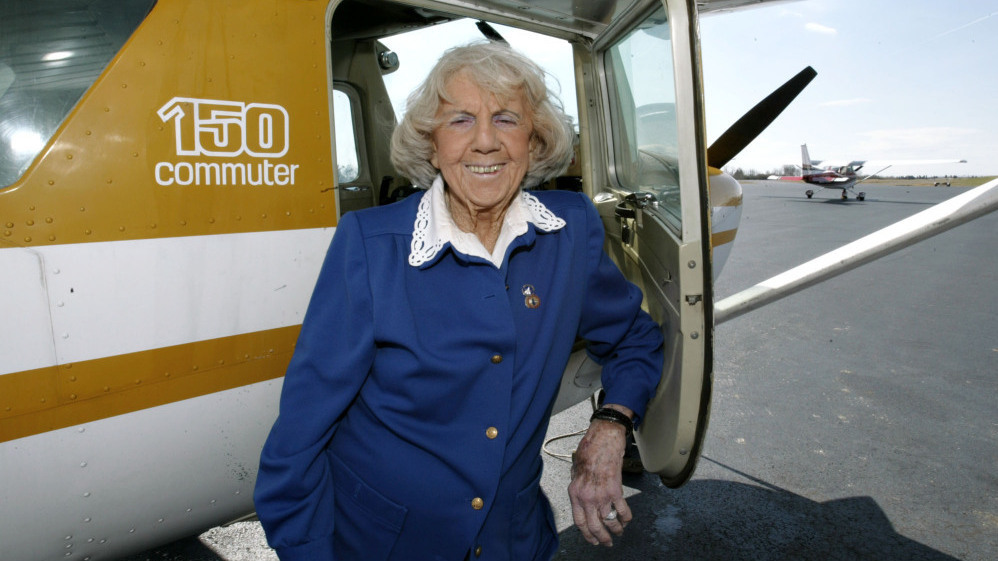 Evelyn "Mama Bird" Johnson poses by at the airport she managed in Morristown, Tenn., in this 2005 file photo. Johnson, who began flying in 1944, died Thursday.

Evelyn Bryan Johnson, a record-setting pilot who was born just six years after the Wright brothers made their historic flight, has died at the age of 102. Johnson, who began flying in 1944, holds the Guinness world record for the most hours logged by a female pilot — more than 57,000.

In addition to her accomplished flying record, Johnson also helped many other pilots earn their wings. After one student called her Mama Bird, the nickname stuck with Johnson, as she gave lessons and FAA flight exams to thousands of pilots. 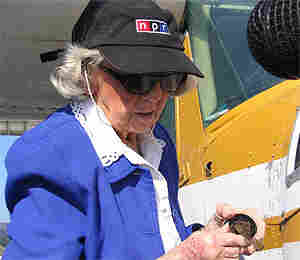 Evelyn Johnson, who holds a world record as the most experienced female pilot, appeared on NPR in 2003. Johnson died Thursday at the age of 102. Charles Mayer/NPR hide caption

Johnson made an impact on aviation that will last beyond her years — by her own estimation, she trained some 5,000 pilots, including many who are today flying commercial jetliners and cargo planes.

"Two of them turned out to be vice presidents of US Air," she told NPR's Scott Simon back in 2003. "One of them was a 30-year pilot for FedEx; one of the girls flies for American out of New York; some of the other girls fly for United, Delta. There's lots of girls, as well as boys."

Johnson lived in Morristown, Tenn., where she was the longtime manager of the Moore-Murrell Airport — a position she held beyond her 100th birthday, and seemingly up to the time of her death Thursday.

Update at 7 p.m. ET: We've added audio to the top of this post — a remembrance from Charlie Mayer, NPR's director of operations. Charlie was Scott's producer when they visited Johnson in Tennessee; he also later flew with her. His story aired on All Things Considered Friday.

As the AP reports, "Johnson was inducted into the National Aviation Hall of Fame in Dayton, Ohio, in 2007. At that time, she had been flying for 55 years and had spent the equivalent of seven years in flight."

Those flights included several exploits, as Johnson told TAP TV last year. There was the time she flew in a race from Washington, D.C., to Havana, Cuba; the two times her engine failed, forcing her to land in fields; the flight that ended smoothly despite an engine on fire. Johnson also became one of the first women to earn a helicopter pilot's license, joining a group known as the Whirly Girls.

In 1958, Jonson's quick action after witnessing a helicopter crash earned her recognition from the Carnegie Hero Fund. The injured pilot was still in the wreckage when Johnson crawled beneath the whirling blades to turn off the machine's motor. She then sprayed the wreck with a fire extinguisher to prevent an explosion.

At the time of her death, Johnson had flown more than any other living pilot. She spoke with Scott Simon on the occasion of her 94th birthday, when she told him how flying airplanes always helped clear her head of life's worries.

"It's a different world from anything else. When you get up there and you fly around, everything is so beautiful. It's just wonderful like that," she told Scott. "And then, while you're up there, you forget about your problems while you're up. You've still got 'em, but that doesn't matter, you've had a little rest from it. It's just a wonderful thing."

That interview took place six years before Johnson's hundredth birthday — an occasion she said she was looking forward to. Johnson told Scott how she'd like to spend the day.

"Here's what I'd like: Willard Scott will be telling about me being 100 years old," she said. "But I wouldn't hear him — because I'd be up flying."