Accessibility links
EU Human Rights Court Could Be Last Stop For German Claiming CIA Kidnapping : The Two-Way Khaled El-Masri is looking for redress, after he says he was mistakenly flown to a secret prison in Afghanistan, under the CIA's "extraordinary rendition" program.

A German man, who says he was mistakenly shipped to a secret prison in Afghanistan as part of the CIA's "extraordinary rendition" program, took the stand at the European Union's human rights court today. 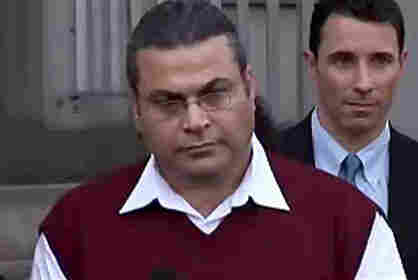 After unsuccessfully seeking redress in the U.S. and Germany, Khaled El-Masri is suing Macedonia, where he was allegedly kidnapped. El-Masri argued that the country was callous and calculating when it turned him over to the U.S. This hearing could also mark the end of the legal road for a case that spans eight years.

"El-Masri, who is of Lebanese descent, says he was brutally interrogated at a secret CIA-run prison in Afghanistan for more than four months after being kidnapped from Macedonia in 2003, apparently mistaken for a terror suspect. He says he went on a hunger strike for 27 days and was eventually flown back to Europe and abandoned in a mountainous area in Albania. ...

"'Mr. El-Masri has spent the last eight years seeking legal redress for the crimes that were committed against him,' James Goldston told The Associated Press in a telephone interview. 'There is abundant evidence including data on CIA flights to and from (Macedonia's capital) Skopje.'"

The Guardian reports that this is the first full hearing this case has received. In the United States, for example, a court threw out his case against former CIA head George Tenet, citing "state secrets," which the Guardian explains "allowed the U.S. government to have the case dismissed without ever getting to the merits."

The American Civil Liberties Union, which filed a lawsuit on behalf of El-Masri in the United States, calls El-Masri a "victim of torture."

In a press release, the ACLU argues that the United States has yet to answer some basic questions. It writes:

"To add insult to El-Masri's long-lasting injury, according to State Department diplomatic cables, the Bush administration pressured Germany not to prosecute CIA officers responsible for his kidnapping and abuse. Despite the fact that the former President Bush and other senior government officials acknowledged the existence of the U.S. rendition program, and the details of El-Masri's rendition and torture are widely known, the U.S. continues to deny responsibility and has invoked the "state secrets privilege" to protect government officials, CIA operatives and corporations from civil accountability. A 2005 ACLU lawsuit on behalf of El-Masri against former CIA director George Tenet was dismissed by lower courts on state secrecy grounds, and the U.S. Supreme Court declined to hear the case. Because of the U.S. government's failure to provide redress for El-Masri, in 2008 the ACLU filed a petition on his behalf against the United States with the Inter-American Commission on Human Rights. Over four years later, the U.S. government is yet to respond. Thus while his torturers enjoy impunity for their crimes, El-Masri has yet to receive an apology — or any other form of legal redress."