Accessibility links
Feds: Fire Season Off to Slow Start Even As Wildfires Rage in Southwest : The Two-Way As five large fires burn thousands of acres and threaten some communities in the Southwest, federal response teams say they have plenty of resources available and that this wildfire season is actually getting off to a slow start.

Feds: Fire Season Off to Slow Start Even As Wildfires Rage in Southwest

Feds: Fire Season Off to Slow Start Even As Wildfires Rage in Southwest 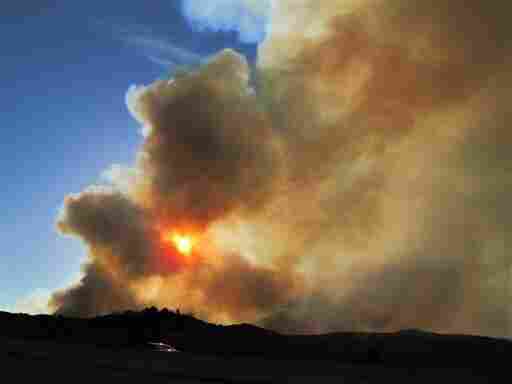 Raging wildfires are burning tens of thousands of of acres in Arizona, Nevada and parts of New Mexico and Colorado. But federal agencies overseeing the response say they're not worried — by this time last year, there had already been more fires that destroyed more acres.

"I would describe [this season] as getting off to a slow start," said Kari Boyd-Peak, a spokeswoman for the National Interagency Fire Center, which bills itself as a national support center for wildland firefighting. "We're just seeing a few fires get going. It's very typical for this time of year — we're behind last year's pace. We're well below the 10-year average for acres burned as well."

In response to the five fires currently burning in the Southwest, the interagency center has raised its fire preparedness level, a one-to-five measure of fire activity and resource allocation, from a one to a two.

The fires getting the most attention heading into this weekend are the Gladiator Fire and Sunflower Fires, in Arizona.

The Sunflower Fire is the largest, burning 12,000 acres and threatening some structures. The Gladiator Fire is considered by by authorities to be the top priority fire in the nation because it's threatening the community of Crown King, Ariz. Residents of Crown King have been evacuated.

" 'This is a really fast-moving fire,' Karen Takai of the Southwest Area Incident Management Team said Thursday morning. 'Yesterday afternoon was explosive as it came across the road.'

"The thick cloud of smoke hovering over the Bradshaw Mountains is visible for miles."

Interagency center averages show that that by this point in the year, wildfires typically scorch about one million acres. At this point in 2012, half that — 500,000 acres — have burned.

"It's unfortunate they are threatening homes and communities, but it's very typical this time of year," Boyd-Peak said.