Accessibility links
Syrian Diplomats Expelled As Nations Condemn Executions : The Two-Way Fewer than 20 of the 108 people killed Friday in Houla died from artillery fire, according to the U.N. High Commissioner for Human Rights' office. Syrian diplomats are being expelled from countries around the world in response. 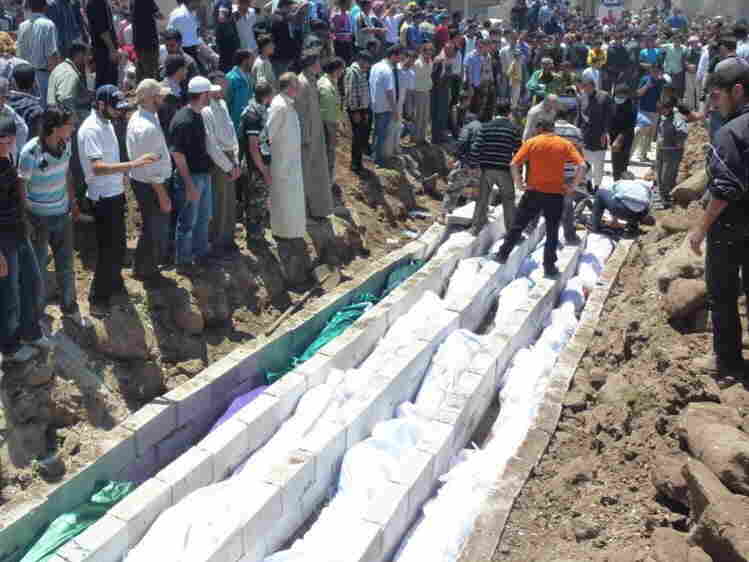 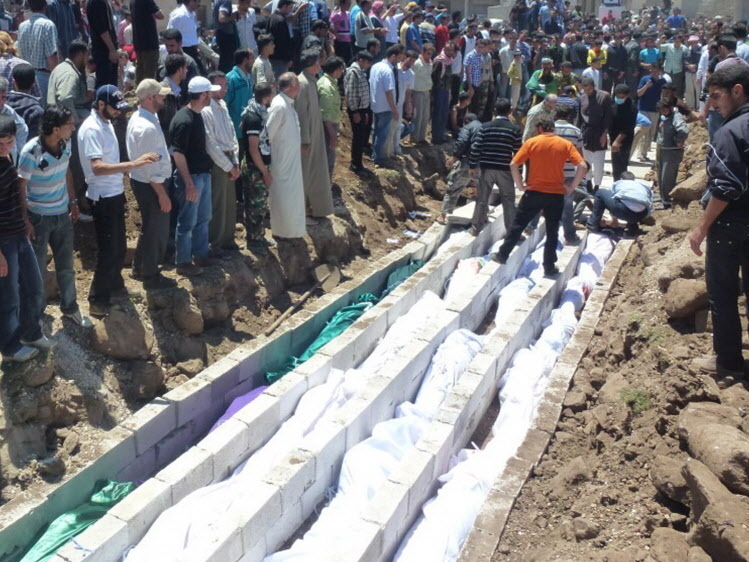 Saturday: In this picture provided by the Syrian opposition's Shaam News Network, people watch the mass burial of victims from Friday's violence in Houla.

"The U.N. said Tuesday that entire families were shot in their homes during a massacre in Syria on Friday that killed more than 100 people, including children," The Associated Press reports. And as nations around the world have reacted this morning to news about the atrocities, they're expelling Syrian diplomats in protest.

According to U.N. officials, most of the victims were shot at close range. And, the AP adds:

"Rupert Colville, a spokesman for the U.N. High Commissioner for Human Rights, said the conclusions were based on accounts gathered by U.N. monitors and corroborated by other sources. He said U.N. monitors found that fewer than 20 of the 108 people killed in the west-central area of Houla were killed by artillery fire."

The BBC adds that "survivors have described gunmen entering homes, firing indiscriminately and slitting the throats of children."

The Assad regime, meanwhile, has blamed "terrorists" for the killings.

Former U.N. Secretary General Kofi Annan, who has tried to broker a peace deal in Syria, met with President Bashar Assad in Damascus today. There's no word yet on what, if any, progress was made at that meeting.

Since protests began in Syria in March 2011, Bloomberg Businessweek writes, "the U.N. estimates that as many as 10,000 people have died," most of them at the hands of government forces. "Britain's Foreign Secretary William Hague told the British Broadcasting Corp. on May 27 that as many as 15,000 may have died."

Friday's mass killings have sparked condemnation from around the world. Today, French President Francois Hollande announced that Syria's ambassador to his country is being expelled, the AP reports.

Annan told reporters in Damascus a short time ago that in his meeting with Assad, "I conveyed in frank terms the grave concern of the international community about the violence in Syria, including the recent shocking events in Houla."

"The violence must stop and the six point plan must be implemented," Annan said. "I need the president to act now. I need other parties to do their part."

"In response to the May 25 massacre in the village of Houla, today the United States informed the Syrian Charge d'Affaires Zuheir Jabbour of his expulsion from the United States. He has 72 hours to leave the country. We took this action in coordination with partner countries including Australia, Canada, Spain, the United Kingdom, Italy, France, and Germany. ...

"We hold the Syrian government responsible for this slaughter of innocent lives. This massacre is the most unambiguous indictment to date of the Syrian government's flagrant violations of its UN Security Council obligations under Resolutions 2042 and 2043 along with the regime's ongoing threat to peace and security."

The State Department says that Syria's charge d'affaires in the U.S. is being expelled, Reuters reports. On Saturday, Secretary of State Hillary Rodham Clinton said the U.S. "condemns in the strongest possible terms [Friday's] massacre."

According to the AP: "German, Italian and Spanish foreign ministries have announced that Syrian ambassadors are being expelled — following similar moves by France, Britain, Australia, and Canada after a massacre in which the United Nations says families were shot at close range in their homes."

Update at 7:50 a.m. ET: Britain and Germany are also expelling Syrian diplomats, according to reports from the AP and Reuters.