(NPR's Larry Abramson is among the correspondents traveling with Defense Secretary Leon Panetta in Asia this week. In Vietnam earlier today, the government there told Panetta it will open three new sites for excavation — in the hope of finding U.S. troops' remains. Meanwhile, from Hanoi, Larry tells us about a unique exchange of artifacts between Panetta and his Vietnamese counterpart.)

Today, the U.S. and its former enemy found a common language: the language of the military. Panetta watched a colorful honor guard march past the steps of Vietnam's Defense Ministry. A military band played the Star Spangled Banner, and the Vietnamese national anthem. Soldiers marched and sweated in the Hanoi humidity. Military men respect this kind of spectacle. It is a shared value in militaries do all over the world. 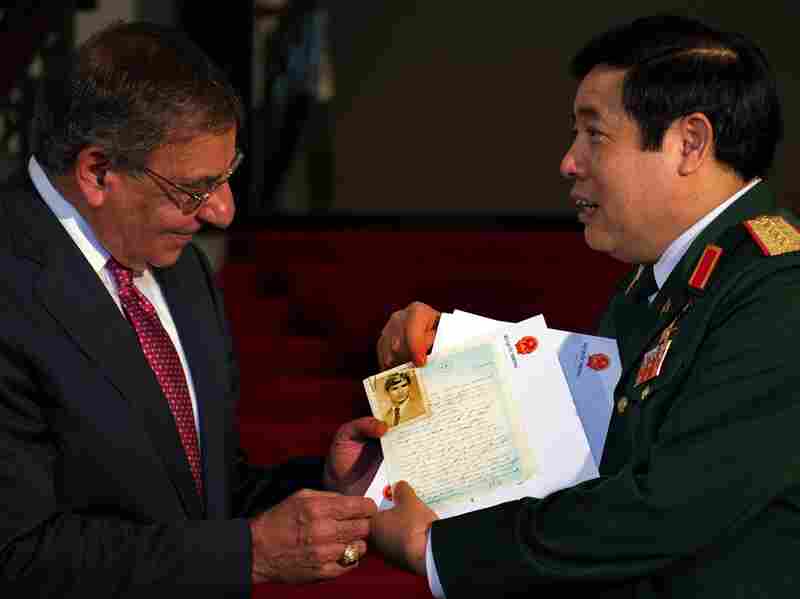 Then Panetta and his Vietnamese Defense Minister Phung Quang Thanh did something unusual They exchanged letters and a diary written by soldiers who died in the war more than 40 years ago.

The diary was found on the body of a North Vietnamese soldier, Vu Dinh Doan, when he was killed in a firefight in 1966. A U.S. Marine brought it back to America.

The letters were found by the North Vietnamese on the body of U.S. Army Sgt. Steven Flaherty, who was killed in action in 1969.

Panetta pulled his offering — Vu Dinh Doan's diary — out of a Fed Ex envelope. It had had only just arrived from the U.S. The PBS-TV show History Detectives had helped get the diary to Defense Department officials.

Among the many staged events the Pentagon plans on overseas trips, this was a rather emotional one. These are original documents from the period. The Flaherty letters were used for propaganda purposes by the North. But North Vietnamese Senior Colonel Nguyen Phu Dat held onto them, and posted an online note, which led to their return to Panetta.

Among the things Flaherty wrote, according to the Defense Department, was a letter to a "Mrs. Wyatt" in which he said "this is a dirty and cruel war but I'm sure people will understand the purpose of this war even though many of us might not agree." In another, he told his mother that "we couldn't retrieve the bodies of our men or ruck sacks and when we brought airstrikes, jets dropped napalm and explosives that destroyed everything that was there."

In his comments about the artifacts, Panetta said today that "there were many lives lost in that war both from the United States and from Vietnam. If we can work together — both of our countries — to develop a better relationship ... all of the sacrifice involved in that war will have proved worthwhile because we will improve the peace and prosperity of the Asia-Pacific region."