Accessibility links
The Dingo Did Take The Baby : The Two-Way Baby Azaria's 1980 disappearance became international news after her mother was convicted of murder and Meryl Streep brought the story to the big screen. Now, a coroner has closed the case and agreed with the mom's explanation.

The Dingo Did Take The Baby

The Dingo Did Take The Baby 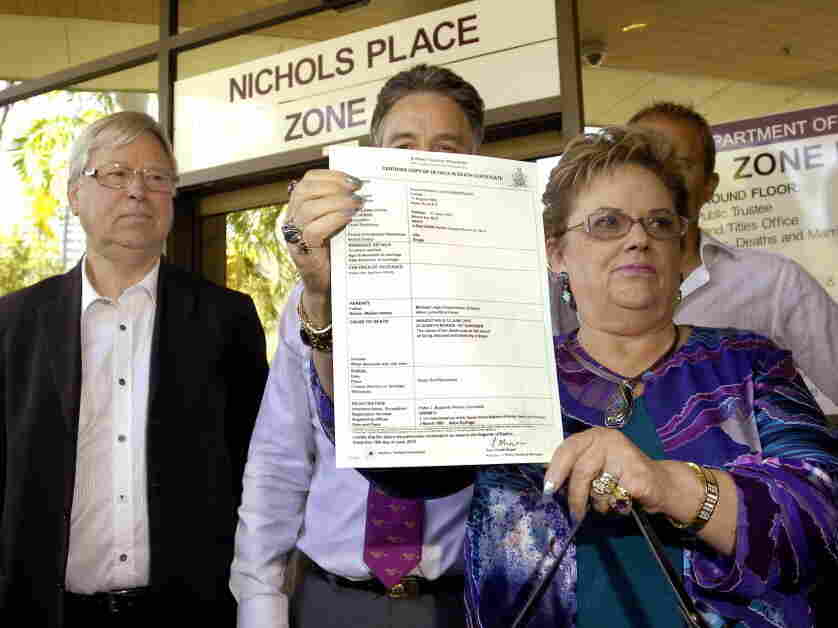 Lindy Chamberlain-Creighton holds her daughter Azaria's death certificate as ex-husband Michael Chamberlain (left) looks on after a coroner ruled today that a dingo snatched the baby from a tent in the Australian desert 32 years ago. Patrina Malone /AFP/Getty Images hide caption 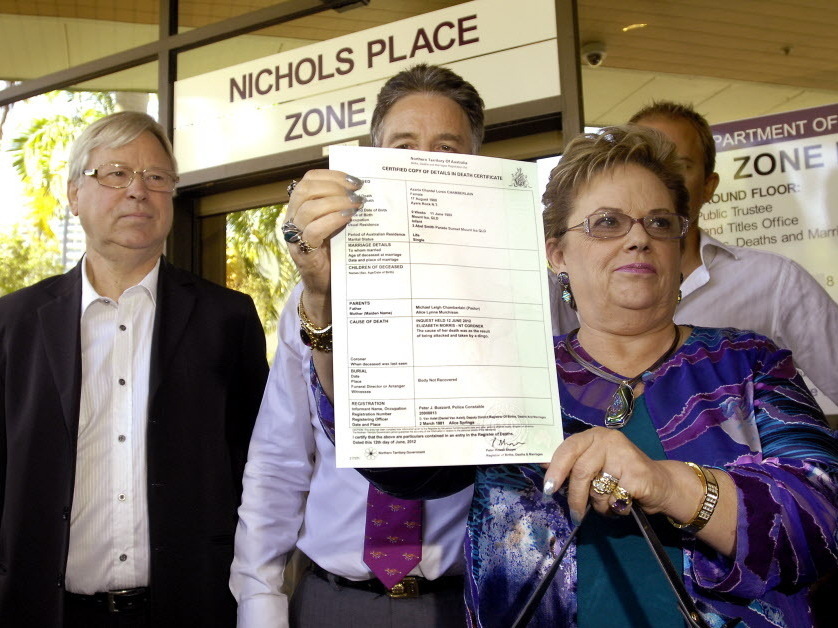 Lindy Chamberlain-Creighton holds her daughter Azaria's death certificate as ex-husband Michael Chamberlain (left) looks on after a coroner ruled today that a dingo snatched the baby from a tent in the Australian desert 32 years ago.

A coroner in Australia has agreed that the dingo did in fact take the baby — "settling a notorious 1980 case that split the nation and led to a mistaken murder conviction," as The Associated Press writes.

And Australia's ABC News says Michael Chamberlain and his ex-wife Lindy Chamberlain-Creighton on Tuesday (in Australia) heard words for which they've waited 32 years:

"The heart-felt condolences" came from coroner Elizabeth Morris, the news network says, who "fought back tears as she ruled today that baby Azaria Chamberlain was taken and killed by a dingo near Uluru" in 1980, when the family was on a camping trip.

"Court hearings in the 1980s resulted in Lindy Chamberlain being jailed for murder while her then husband, Michael Chamberlain, was given a suspended sentence for being an accessory after the fact. But after Azaria's matinee jacket was found in 1986, the case was reopened and a royal commission in 1987 exonerated both parents.

"In 1988, the Northern Territory Court of Criminal Appeal overturned all convictions against the [couple]. However, a coronial inquest in 1995 delivered an open verdict."

Today, coroner Morris said a "witch-hunt" had led to Chamberlain-Creighton's conviction. Then, authorities just wouldn't believe that a dingo was capable of snatching a baby. But the only logical explanation, according to the coroner, is that a dingo did in fact carry Azaria away. Azaria's body was never found. She would have turned 32 on Monday, The Australian says.

The 9-week-old baby's death certificate has now been changed to reflect the coroner's ruling that a dingo was responsible.

Meryl Streep famously portrayed Lindy Chamberlain in the 1988 movie A Cry in the Dark — "shouting in a heavy Australian accent, 'The dingo's got my baby!' " as The Hollywood Reporter says. You can find some clips from the movie on the actress' website, SimplyStreep.com. The Chamberlains divorced during the long legal battle over Azaria's death, and both have since remarried.