Accessibility links
Supreme Court Strikes Down Key Provisions Of Arizona Immigration Law : The Two-Way The high court upheld the part of the law that asked police to check the immigration status of those stopped for another violation. 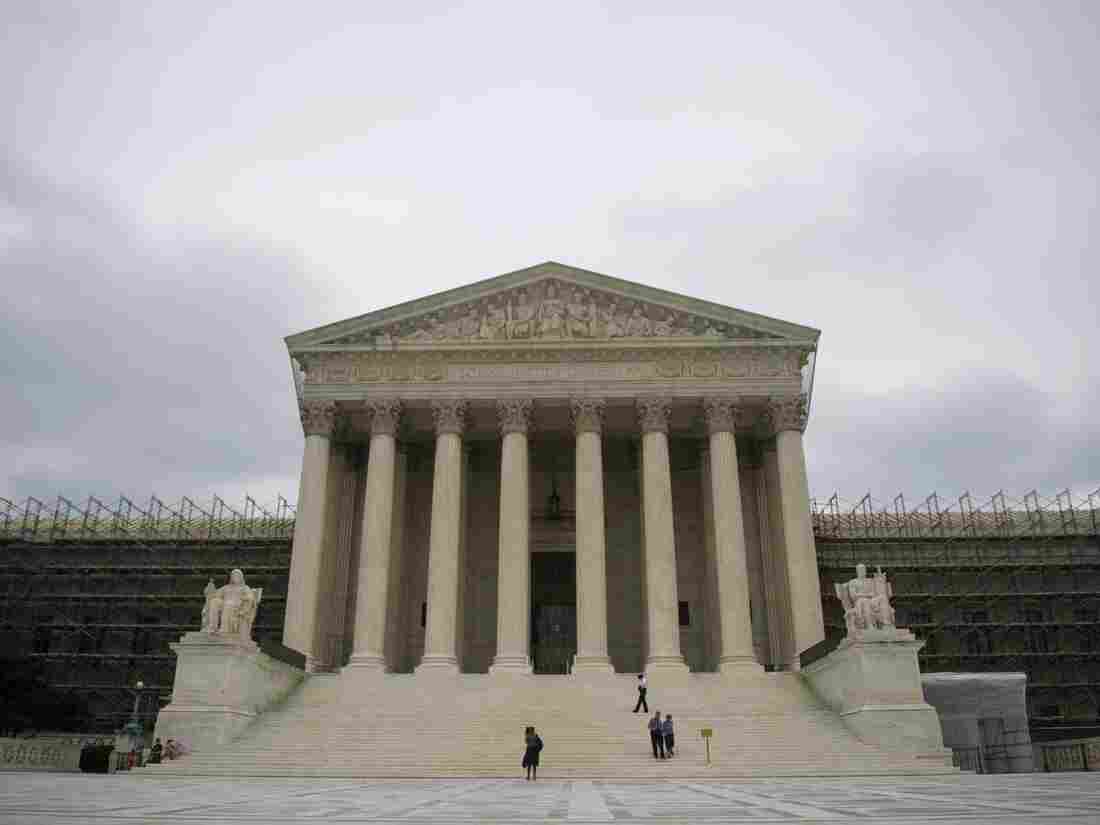 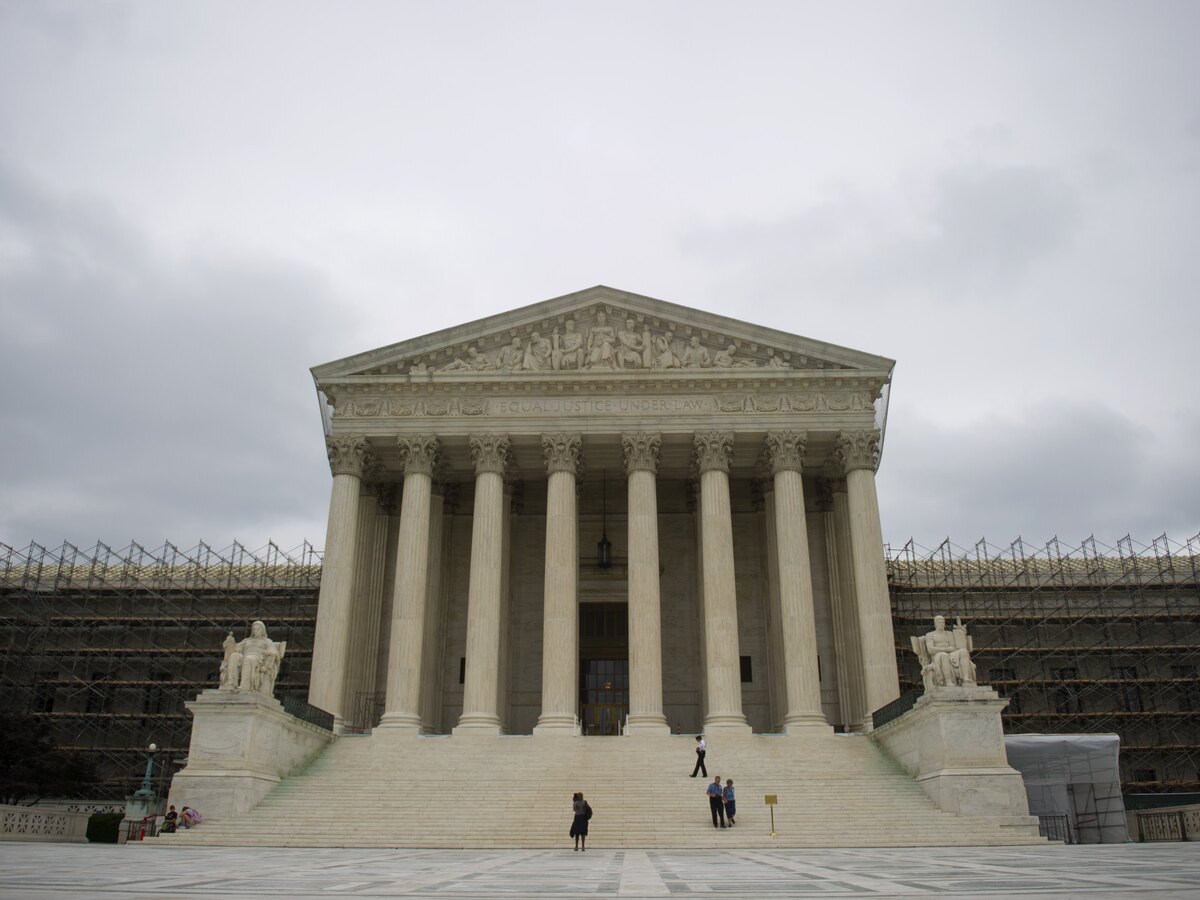 The high court upheld the part of the law that asked police to check the immigration status of those stopped for another violation.

According to SCOTUSblog, which is live blogging, the court said "it is not clear whether application of this provision will interfere with immigration law."

That means the court is open to further challenges once that part of the law is implemented.

"The Federal Government has brought suit against a sovereign State to challenge the provision even before the law has gone into effect," the court said. "There is a basic uncertainty about what the law means and how it will be enforced. At this stage, without the benefit of a definitive interpretation from the state courts, it would be inappropriate to assume §2(B) will be construed in a way that creates a conflict with federal law."

The basic outline of the broader decision, however, is that the federal government can challenge state laws that interfere with its duties on immigration.

Here's a key paragraph of the majority opinion:

"The National Government has significant power to regulate immigration. With power comes responsibility, and the sound exercise of national power over immigration depends on the Nation's meeting its responsibility to base its laws on a political will informed by searching, thought­ful, rational civic discourse. Arizona may have understandable frustrations with the problems caused by illegal immigration while that process continues, but the State may not pursue policies that undermine federal law."

The decision, reports NPR's Carrie Johnson, gave the Obama administration most of what it sought.

The court did not issue its decision on the country's health care overhaul law. It will meet again on Thursday; expect a decision then.

The Wall Street Journal brings us a bit more detail on the parts of the law that were struck down:

"Five justices were in the majority choosing to strike down the three provisions. Dissenting justices argued that the whole law should have been upheld."

Justice Antonin Scalia read a statement from the bench, which The New York Times has uploaded. In it Scalia argues that the Constitution "does not limit" states from enacting their own immigration policy.

Further, he argues, the laws in question in this case do not supersede federal statutes, which would be prohibited under the supremacy clause. Scalia even mentions the Obama administration's decision to put off deporting some younger illegal immigrants.

"Arizona bears the brunt of the country's illegal immigration problem," he wrote. "Its citizens feel themselves under siege by large numbers of illegal immigrants who invade their property, strain their social services, and even place their lives in jeopardy. Federal officials have been unable to remedy the problem, and indeed have recently shown that they are simply unwilling to do so. Arizona has moved to protect its sovereignty — not in contradiction of federal law, but in complete compliance with it. The laws under challenge here do not extend or revise federal immigration restrictions, but merely enforce those restrictions more effectively. If securing its territory in this fashion is not within the power of Arizona, we should cease referring to it as a sovereign State. For these reasons, I dissent."

In a written statement, President Obama said he "pleased" with the Supreme Court's decision. He added:

"At the same time, I remain concerned about the practical impact of the remaining provision of the Arizona law that requires local law enforcement officials to check the immigration status of anyone they even suspect to be here illegally. I agree with the Court that individuals cannot be detained solely to verify their immigration status. No American should ever live under a cloud of suspicion just because of what they look like."

According to the AP, Romney said: "I believe that each state has the duty and the right to secure our borders and preserve the rule of law, particularly when the federal government has failed to meet its responsibilities."

"Arizona is prepared to enforce this law... [in a way that] that is faithful to the constitution," Brewer said during a press conference.

She said section 2B of the law allows local law enforcement to help the federal government.

"This is certainly not the end of our journey," Brewer added, saying she fully expects news lawsuits that challenge section 2B of the law.

Update at 10:55 a.m. ET. Note that we live blogged, while we waited on Supreme Court decisions. You'll find our original post along with earlier updates below.

The calendar is winding down on June, so today is one of the last days this term the Supreme Court is expected to hand down decisions.

That means that what we've told you for the past three Mondays applies again today:

"We could hear as soon as this morning how the Supreme Court rules on the most-anticipated issue of the year: the constitutionality of the Affordable Care Act — better known as the health care overhaul enacted in 2010 with the support of President Obama and his fellow Democrats over the opposition of Republicans."

The Supreme Court usually starts issuing opinions at about 10 a.m. ET. The court hands reporters and visitors in the court hard copies of its decisions, then very shortly after will post the decision on its website. We will, of course, be watching.

SCOTUSblog will be live blogging and they are very quick to move the news.

The high court is also expected to make a couple of other important decisions. One of is American Tradition Partnership Inc. v. Bullock — otherwise known as "the Montana case" — in which the Supreme Court could decide to revisit its Citizens United decision, which as NPR's David Welna explained "gave corporations the green light to spend unlimited amounts in political campaigns."

Also on deck: A decision on the constitutionality of Arizona's immigration law. The big question, writes The Wall Street Journal, is whether the challenged provision is "an intrusion on federal sovereignty."

SCOTUSblog reports that we are not expecting any new decisions this morning.

SCOTUSblog reports: "Arizona v. US has been decided. The Ninth Circuit is reversed in part and affirmed in part."

Justice Kennedy wrote the opinion. "Most of the key provisions are invalidated," SCOTUSblog reports.

Justice Samuel Alito is reading his dissent in the juveniles case from the bench — still more decisions coming.

"Supreme Court rules out life in prison without possibility of parole for juveniles under 18."

SCOTUS Blog reports the vote was 5-4 with Justice Kagan writing the majority opinion.

The Supreme Court has decided not revisit its decision on Citizens United, summarily reversing the Montana case 5 to 4, SCOTUSblog and the AP report.

"By a 5-4 vote, the court's conservative justices said the decision in the Citizens United case in 2010 applies to state campaign finance laws and guarantees corporate and labor union interests the right to spend freely to advocate for or against candidates for state and local offices."

The court is incredibly prompt, so look for decisions to start trickling in shortly after 10.

"Lyle: Heading into the adjoining room for the releases of the day. Orders will come within seconds after 10, and the first opinion will come almost immediately after the orders. The five-minutes-before-sitting buzzer has just sounded in the Court's hallways. The Justices are in the robing room now, we assume."

Also Rebecca Berg of the New York Times tweets this picture of the scene outside the high court.