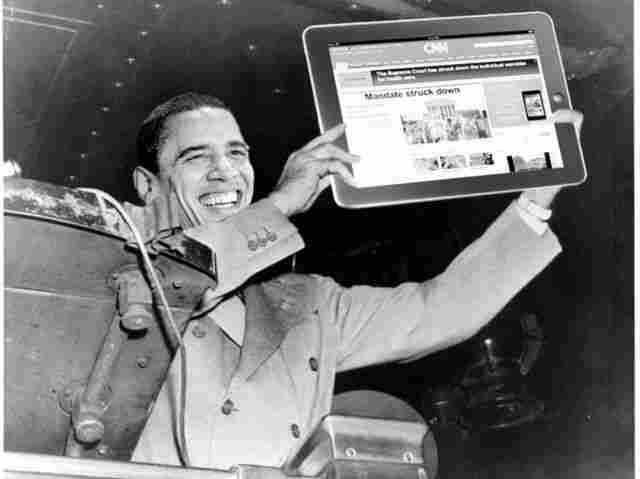 A Photoshopped alteration of the iconic Harry Truman photo. Tweeted by Gary He. http://yfrog.com/hw7ozrfj hide caption 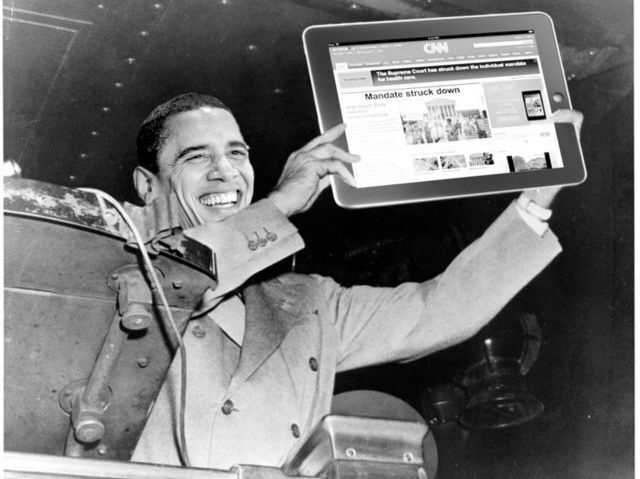 A Photoshopped alteration of the iconic Harry Truman photo. Tweeted by Gary He.

MarketWatch calls this CNN and Fox's 'Dewey Defeats Truman' moment. For several surprising minutes this morning, both media companies wrongly announced that the Affordable Care Act had been overturned by the Supreme Court.

Poynter has a fascinating trail of screen shots, emails and tweets from both media companies supporting the erroneous reports, including their initial reports: "Mandate Struck Down", for CNN and "Supreme Court Finds Health Care Individual Mandate Unconstitutional" for Fox.

The Supreme Court's majority decision upholding the constitutionality of the health care law is written by Chief Justice John Roberts. It's thickly worded at 59 pages with an equally verbose concurring opinion by Justice Ruth Bader Ginsberg. The dissent from Justices Scalia, Kennedy, Thomas and Alito is six pages longer than the majority's ruling and then Justice Thomas adds his own opinion.

CNN and Fox both soon corrected themselves on air and online. Politico has CNN's explanation: it says the network relied on Roberts' dismissal of the Commerce Clause as sufficient to support the health care law. But in its haste, the outlet didn't wade through the rest of the ruling to find Roberts opinion backing the law. Fox hasn't posted a correction on its website.

One organization that also got it right, the AP, is being instructed not to gloat. Media reporter Jim Romanesko prints an editor's email that starts "Please, immediately, stop taunting on social networks about CNN and others' SCOTUS ruling mistake and the AP getting it right". The email says the AP's "reporting should take the lead".