Accessibility links
No Power? No A.C.? Tell Us About It : The Two-Way About 2.7 million people from the mid-Atlantic west to Ohio are entering a third day without power and with temperatures well above 90 degrees. For some, the electricity may not be on until the coming weekend. 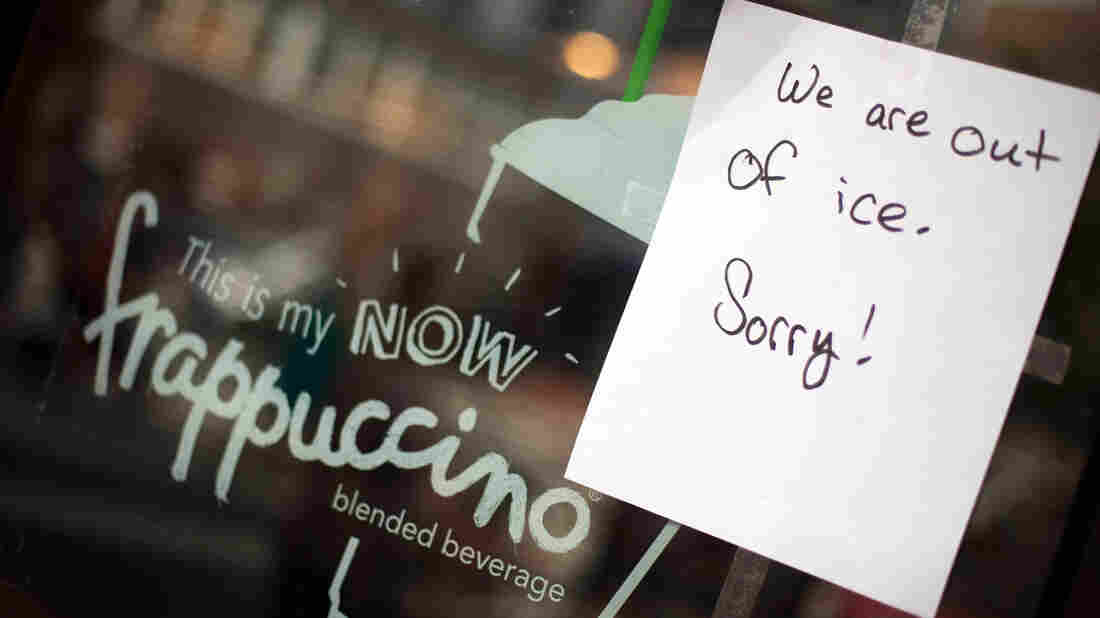 Sign of the times: In Bethesda, Md., a Starbucks breaks some bad news. Ice is in short supply in many places where the power is out. Allison Shelley/Getty Images hide caption 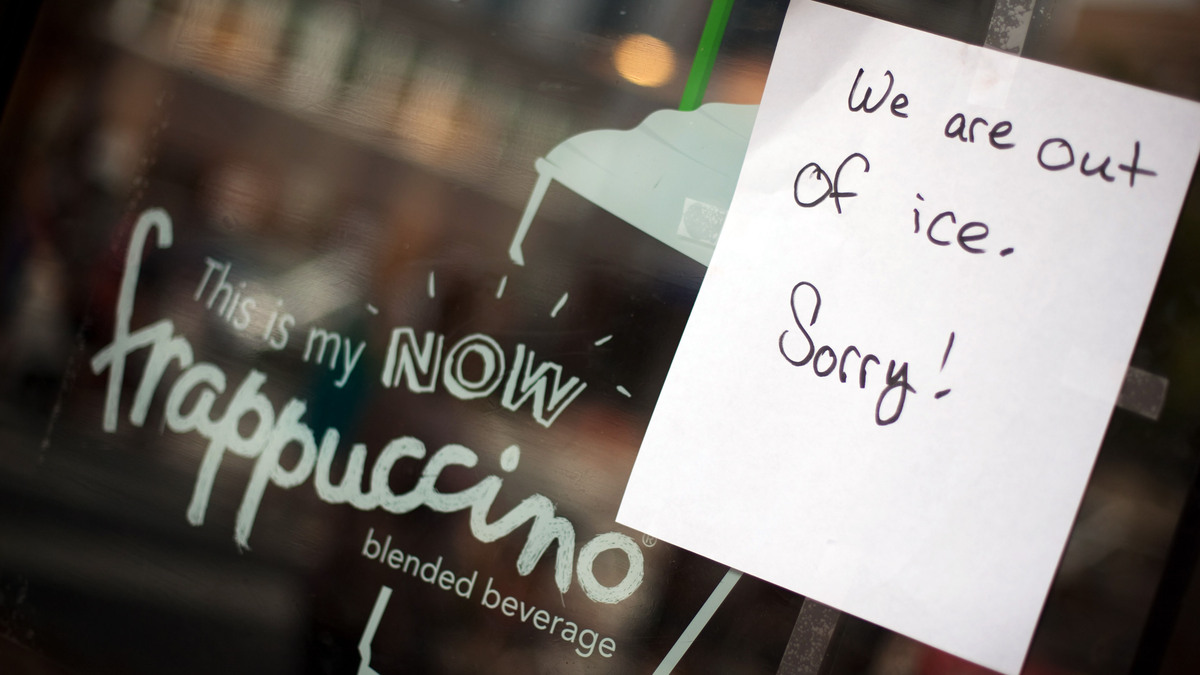 Sign of the times: In Bethesda, Md., a Starbucks breaks some bad news. Ice is in short supply in many places where the power is out.

For about 2.7 million people across mid-Atlantic and west to Ohio it's Day 3 without power.

Friday's "land hurricane" — technically known as a derecho — may be long gone, but it is certainly not forgotten. Crews, many brought in from states well outside the affected region, continue to work on restoring power. But utilities are warning it could be next weekend before everyone is back on the grid.

So with temperatures again in the 90s today across much of the affected area, millions continue to face the challenge of getting through without air conditioning.

And now, for commuters in Washington and Baltimore in particular, there's the problem of getting to and from work. Hundreds of traffic lights are still dark, The Washington Post reports. Federal workers in the D.C. region have been given the OK to take unscheduled leave or to work from home if they can in an effort to keep some cars off the roads.

Those problems don't compare, of course, to the tragedies that some have experienced. At least 18 deaths are attributed to the storm or its aftereffects, The Associated Press reports. It's also worth noting that while some homes and vehicles were hit by falling trees, the damage isn't close to what's happened in Colorado, where Colorado Springs' Waldo Canyon wildfire has destroyed about 350 homes.

This blogger's home has been without power since the storm blew through late Friday evening. We're fortunate to have a relatively cool basement and that local restaurants and supermarkets have power (and air conditioning!). The one thing we'd really like to have but don't is ice. Everybody's sold out.

We're interested in how others are faring and what it's been like in their neighborhoods. Feel free to share your stories in the comments thread. We'll highlight some of the most interesting.

Update at 2:50 p.m. ET. In Fort Wayne, "Neighbors Have Come Together Wonderfully."

Two-Way reader "LanahLink" writes in the comments thread that:

"Echoing a previous comment, I'm also in Fort Wayne, Indiana (Northeast IN) ... where over 80,000 people in our city of about 250,000 are out of power — my entire neighborhood near downtown is out and neighbors have come together wonderfully. I had to make an event out of town so after hiding in the basement as tornado sirens blared and shed doors flew, we took over an hour to go 5 miles as streets were blocked with old huge trees and power lines Friday. Power likely [will be] out until Wednesday night.

"Interesting Indiana hasn't been mentioned. But, I find it more interesting in that most commentary in news, including my own FB posts, are about those with the means to find restaurants, coffee shops and the like to take refuge from 100 degree heat.

"As I sit hear in my local Firefly Coffee House with my $5 almond milk mocha in the AC and wifi on my laptop and iPhone by my side, I'm reminded how privileged I am to stay at a friend's house, escape to these money-consuming spots vs. sweletering in my house for 6 days in 100 degree heat. Our community has Red Cross stations & opened free pools, but I know I am thankful for the options I have. I think I'll take some time this afternoon to see if I can lend a hand. Peace :)"

Jeff Masters, director of meteorology for Wunderground.com, a weather website, just told All Things Considered host Melissa Block that during the derecho, "we had over 30 thunderstorms with wind gusts of 80 miles per hour. ... It's kind of the equivalent to having 30-plus weak tornadoes on the ground."

As for how a derecho forms, he said that if enough thunderstorms develop "in the same location ... they have the opportunity to work together and form a complex or a greater whole."

More from his conversation with Melissa is due on All Things Considered later today. Click here to find an NPR station that broadcasts or streams the show.

Note at 10:35 a.m. ET: The death toll related to Friday's storm has grown to 18, from the earlier report of 13, according to the AP. So we've updated the post above.