Accessibility links
'Seventeen' Magazine Takes No-Photoshop Pledge After 8th-Grader's Campaign : The Two-Way Julia Bluhm, 14, rounded up 80,000 signatures with an online petition, and that convinced the magazine to promise not to digitally alter editorial photos of teen models. The editor in chief writes that Seventeen "never has, never will." 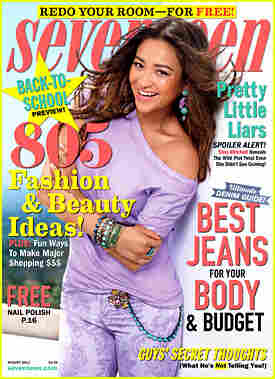 Somewhere between school and her extracurricular activities, eighth-grader Julia Bluhm found time to launch a crusade against airbrushed images in one of the country's top teen magazines.

And this week, she won: Seventeen magazine pledged not to digitally alter body sizes or face shapes of young women featured in its editorial pages, largely in response to the online petition Julia started this spring.

"We should focus on people's personalities, not just how they look," she told NPR member station WBUR last month. "If you're looking for a girlfriend who looks like the models that you see in magazines, you're never going to find a girlfriend, because those people are edited with computers."

After hearing too many fellow teens in her ballet class complain about their weight, the 14-year-old started her campaign in April with a petition on Change.org. It called for the magazine to print one unaltered photo spread each month. The petition — and a demonstration at the corporate offices of Hearst, which owns Seventeen — led to more than 80,000 signatures from around the world.

The barrage of correspondence from young girls led Ann Shoket, Seventeen's editor-in-chief, to invite Julia for a meeting and subsequently put out a new policy statement on the magazine's photo enhancements.

The New York Times reports that while Shoket stresses the magazine "never has, never will" digitally alter the body or face shapes of its models, her editor's letter in the upcoming August issue will reaffirm its commitment. Skolet writes that the entire Seventeen staff has signed an eight-point Body Peace Treaty, promising not to alter natural shapes and include only images of "real girls and models who are healthy."

"While we work hard behind the scenes to make sure we're being authentic, your notes made me realize that it was time for us to be more public about our commitment," Shoket writes in her letter to readers, published in part in Tuesday's Times. The magazine also promises greater transparency surrounding its photo shoots, showing what goes into the shoots on its behind-the-scenes Tumblr.

Transparency and the new pledge don't necessarily mean every page in the magazine will be au naturel, because so many pages are filled with ads. The companies doing the advertising aren't making the same no-Photoshop promise, so it's unclear what the pact means for digitally enhanced advertisements. Calls to the magazine to comment on the policy haven't been returned.

"This is a huge victory, and I'm so unbelievably happy," Julia writes on her online petition page.

But the fight against enhanced images of young girls isn't over. Inspired by the win, two other middle-school activists are taking on Teen Vogue in a new online petition, which, as of this posting, already has more than 11,000 signatures.