Accessibility links
U.S. Gives Afghanistan New Ally Status As Part Of 2014 Transition : The Two-Way The country has been designated a "major non-NATO ally," which will facilitate defense and security cooperation between the countries even after the U.S. withdraws combat troops. 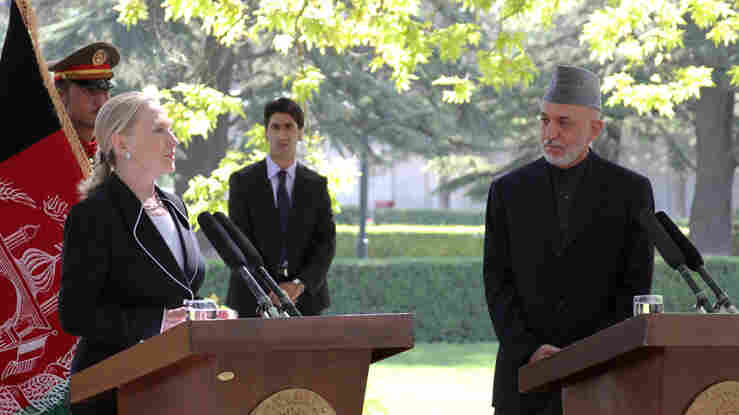 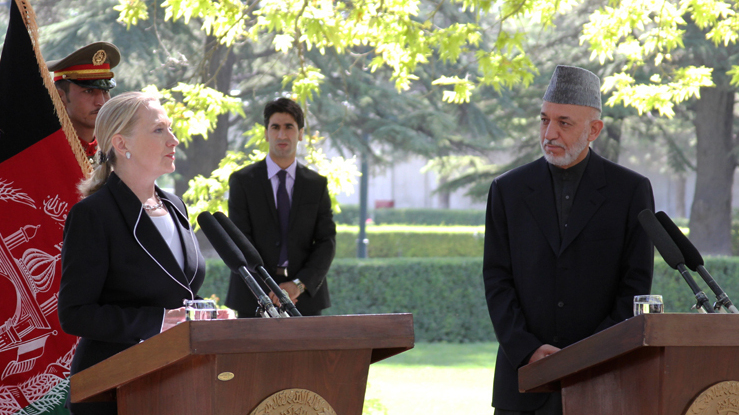 Secretary of State Hillary Clinton made an unannounced visit to Afghanistan this morning, and she brought along some news. The country has officially been designated a "major non-NATO ally" of the U.S., which will facilitate defense and security cooperation between the countries even after the U.S. withdraws combat troops in 2014.

In an emailed press release, the State Department says the status "qualifies a country for certain privileges supporting defense and security cooperation but does not entail any security commitment to that country."

Clinton held a brief press conference in Kabul after meeting with President Hamid Karzai and talking to staff at the U.S. Embassy. NPR's Sean Carberry tells our Newscast desk that "Clinton went to great lengths to ease concerns that the U.S. will forget about Afghanistan once the troops leave in 2014."

The State Department says that as Afghanistan begins taking on more security responsibility, the designation "will be a critical catalyst for maintaining effective Afghan National Security Forces and building a robust peace-time security relationship between Afghanistan and the United States."

After the event, Clinton and Karzai departed for an international donor conference in Tokyo, which will begin tomorrow. The Associated Press reports "donors are expected to pledge around $4 billion a year in long-term civilian support."

The Washington Post says that aid is anticipated "at least through 2017 and ideally until 2025."

The funding is not expected to come without stipulation. The AP says conference attendees have an agenda:

"In Tokyo, representatives from some 70 countries and organizations will establish accountability guidelines to ensure that Afghanistan does more to improve governance and finance management, and to safeguard the democratic process, rule of law and human rights — especially those of women."

As the Post reports, corruption will be at the forefront of donors' minds. From Kabul, Clinton had this to say on the topic:

"Afghanistan needs to do its part as well, by making key economic reforms, fighting corruption, and strengthening the rule of law, all of which are key conditions for attracting more trade and investment. I want to commend President Karzai on his strong public pledges to stamp out corruption and build the institutions that will be critical to Afghanistan's future."

But, as the Post says, "Despite years of U.S. pressure, Afghan President Hamid Karzai has failed to undertake significant reforms to curtail corruption, and there has not been a single high-level conviction in a corruption case."

Even so, Clinton called the new alliance status a commitment to Afghanistan's future.

"Please know that the United States will be your friend and your partner. We are not even imagining abandoning Afghanistan."

As NPR's Sean Carberry reports, Clinton today also mentioned Pakistan, which has long been accused of supporting insurgents in Afghanistan.

"We were struck by the recent call from Pakistan's Parliament that Pakistani territory shall not be used for any kind of attacks on other countries."

Update at 8:10 a.m. ET. A Clarification On Earlier Statement:

The original version of this post stated: "The Washington Post says that aid is anticipated 'at least through 2017 and ideally until 2025,' and is a big cut from the more than $100 billion a year the U.S. is spending on the country now."

As Carberry points out, it's not quite right to compare $4 billion in aid anticipated Sunday to the $100 billion the U.S. has been spending:

"The U.S. is spending around $100 billion a year running and fighting the war in Afghanistan, but that money is not aid money. In FY 2010, the U.S. spent a little over $4 billion on non-military aid to Afghanistan and is projecting about $2.5 billion for FY 2013 as its part of the $4 billion that the international community will provide.

"So, the amount of aid is decreasing significantly, but certainly not from $100 billion to $4 billion. There are multiplier effects of the military spending, so when that money draws down, it will also impact the Afghan economy."

Carberry recently reported on Morning Edition what that decline might mean for the country.