Accessibility links
Paterno, Others Slammed In Report For Failing To Protect Sandusky's Victims : The Two-Way Former FBI Director Louis Freeh and his team of investigators allege that the legendary football coach and other leaders at the school "failed to take any steps" for 14 years to help the young boys who were sexually abused by Jerry Sandusky.

NPR's Tom Goldman on what's expected in the Freeh report

Listen
Paterno, Others Slammed In Report For Failing To Protect Sandusky's Victims

Paterno, Others Slammed In Report For Failing To Protect Sandusky's Victims

In a scathing report that takes to task former head football coach Joe Paterno and other top Penn State officials, an independent report from investigators led by former FBI director Louis Freeh says there was a "total disregard for the safety and welfare" of Jerry Sandusky's child victims "by the most senior leaders" at the school.

That is "our most saddening and sobering finding," Freeh concludes about his investigation into the scandal that rocked the school last year.

Sandusky, a former assistant football coach at the university was arrested last November. He was convicted last month on 45 counts of sexual abuse involving 10 boys over a 15-year period.

According to a statement from Freeh:

"The most powerful men at Penn State failed to take any steps for 14 years to protect the children who Sandusky victimized. Messrs. Spanier, Schultz, Paterno and Curley never demonstrated, through actions or words, any concern for the safety and well-being of Sandusky's victims until after Sandusky's arrest."

The men he's referring to:

-- Paterno, who was fired after the scandal broke and died in January.

-- Former school president Graham Spanier, who was fired after the scandal broke.

-- Athletic director Tim Curley, who is on leave.

In a televised press conference that just concluded, the university's Board of Trustees said it takes "full responsibility" for the school's failings.

Rodney Erickson, Penn State's president, said this was "the most painful chapter in the university's history."

Karen Peetz, the board's chairwoman, said that not only were they taking full responsibility, but they would make sure to take the necessary steps to keep something like this from happening ever again.

The Penn State brass was repeatedly pressed on why they didn't do more to stop Sandusky from molesting children.

Kenneth Frazier, another trustee, said the board wasn't aware of the allegations and that it wasn't because the board didn't ask suffiencient questions, it was because there was an unwillingness from the university leadership including former president Graham Spanier to turn over information.

"In retrospect, we wish we would have press someone who we had complete trust in," said Frazier. In retrospect, he said, "I wish we had pressed more."

Erickson said the university had not renewed the contract of Mike McQueary, the assistant coach who saw Sandusky molesting a boy.

Refusing to comment on the employment status of athletic director Tim Curley, Erickson said personnel decisions would be taken in the coming days.

Freeh said today that among the most telling examples of how a mindset that put protecting the school's reputation above protecting the young boys permeated Penn State was the reaction of three janitors to what they saw Sandusky doing with a young boy in the fall of 2000.

As we noted earlier, the report details how the janitors feared for their jobs if they told anyone in authority about what they saw. The section of the report about that incident is worth noting (fair warning, it includes a description of a sex act involving that young boy):

"According to the testimony of witnesses in Gerald A. Sandusky's trial in Centre County in June 2012, in the fall of 2000 a temporary university janitor ('Janitor A') observed a man, later identified to him as Sandusky, in the assistant coaches' locker room showers of the Lasch Building with a young boy. ... Sandusky had the boy pinned against the wall and was performing oral sex on him. The janitor immediately told one of his fellow janitors ('Janitor B') what he had witnessed, stating that he had 'fought in the [Korean] War ... seen people with their guts blowed out, arms dismembered. ... I just witnessed something in there I'll never forget.'

"On that same night, Janitor B observed two pairs of feet in this same shower at the Lasch Building but could not see the upper bodies of the two persons. He waited for the two to finish their shower, and later saw Jerry Sandusky and a young boy, around the age of 12, exit the locker room holding hands. ...

"A senior janitorial employee ('Janitor C') on duty that night spoke with the staff, who had gathered with Janitor A to calm him down. Janitor C advised Janitor A how he could report what he saw, if he wanted to do so. Janitor B said he would stand by Janitor A if he reported the incident to the police, but Janitor A said, 'no, they'll get rid of all of us.'

"Janitor B explained to the Special Investigative Counsel that reporting the incident 'would have been like going against the president of the United States in my eyes. ... I know Paterno has so much power, if he wanted to get rid of someone, I would have been gone.' He explained 'football runs this university,' and said the university would have closed ranks to protect the football program at all costs."

"Family: Paterno wouldn't have protected Sandusky to avoid bad publicity, was fooled by him."

The wire service reports the family's statement says, in part:

"The idea that any sane, responsible adult would knowingly cover up for a child predator is impossible to accept. The far more realistic conclusion is that many people didn't fully understand what was happening and underestimated or misinterpreted events. ... If Joe Paterno had understood what Sandusky was, a fear of bad publicity would not have factored into his actions."

Asked if he thinks Paterno was powerful enough on campus to have put a stop to what Sandusky was doing years before the assistant coach's 2011 arrest, Freeh just said the former head football coach was "one of the most powerful leaders" at Penn State. "He could have done so if he'd wished to," Freeh said.

His report includes evidence that Paterno had known since at least 1998 of reports that Sandusky was having inappropriate relationships with young boys.

At a news conference a moment ago, Freeh said that none of those four men alerted the board of trustees or other authorities — and none of them ever even talked to Sandusky about the first incident they were told of, in 1998.

"In short, nothing was done and Sandusky was allowed to continue with impunity," Freeh added.

The four men showed, he said, a "callous and shocking disregard for child victims." And asked if what they did was illegal, the former FBI director said he would have to leave that to authorities to decide — but added that the report does contain evidence of an "active agreement to conceal" what was happening.

The report places heavy blame on senior Penn State leaders, whose concealment of child abuse and failure to communicate with police drifted to lower level university employees. In the fall of 2000, Sandusky assaulted a boy in the athletic building showers, and that attack was seen by a janitor. A second janitor saw suspicious behavior by Sandusky and a boy later that same night. The two told a third custodian, and all of them knew they could call the police.

But they didn't. The report quotes one janitor saying that to tell police "would have been like going against the president of the United States in my eyes. ... I know Paterno has so much power, if he wanted to get rid of someone, I would have been gone."

The report offers some more details about how Paterno reacted in February 2001 after being told by then-graduate assistant Mike McQueary that he (McQueary) had seen Sandusky engaging in some sort of sexual act with a young boy in a Penn State shower.

According to the report, "Paterno tells McQueary, 'you did what you had to do. It's my job now to figure out what we want to do.' " 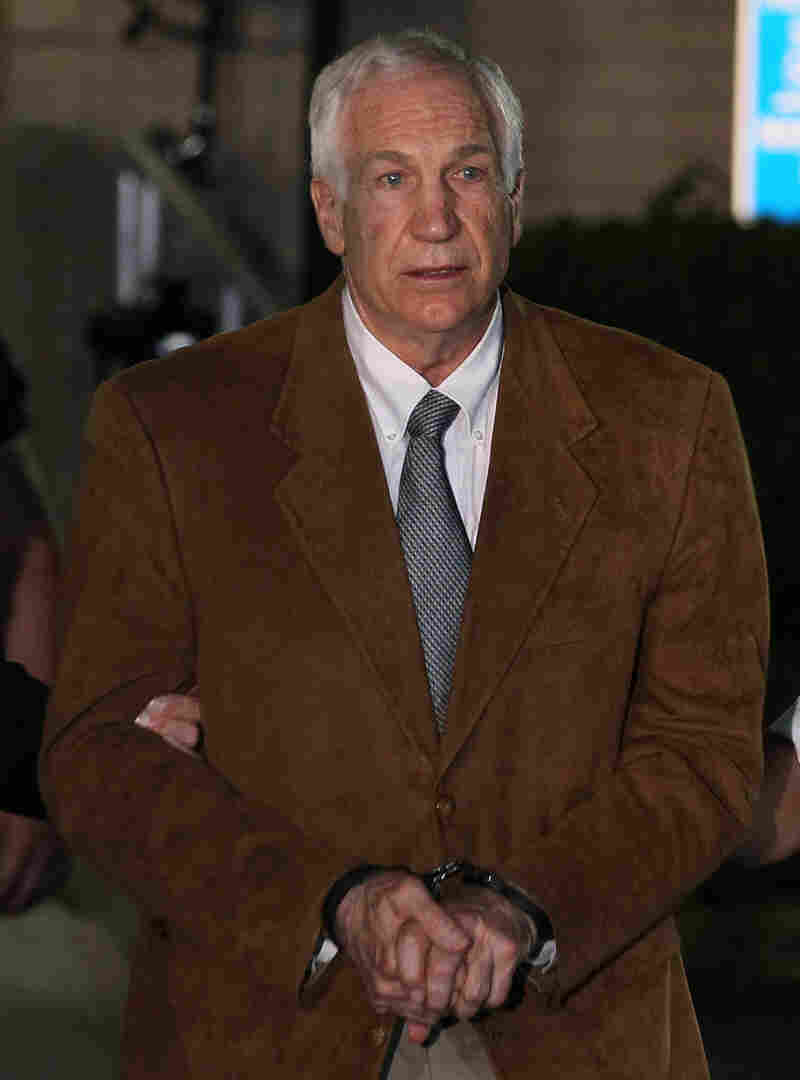 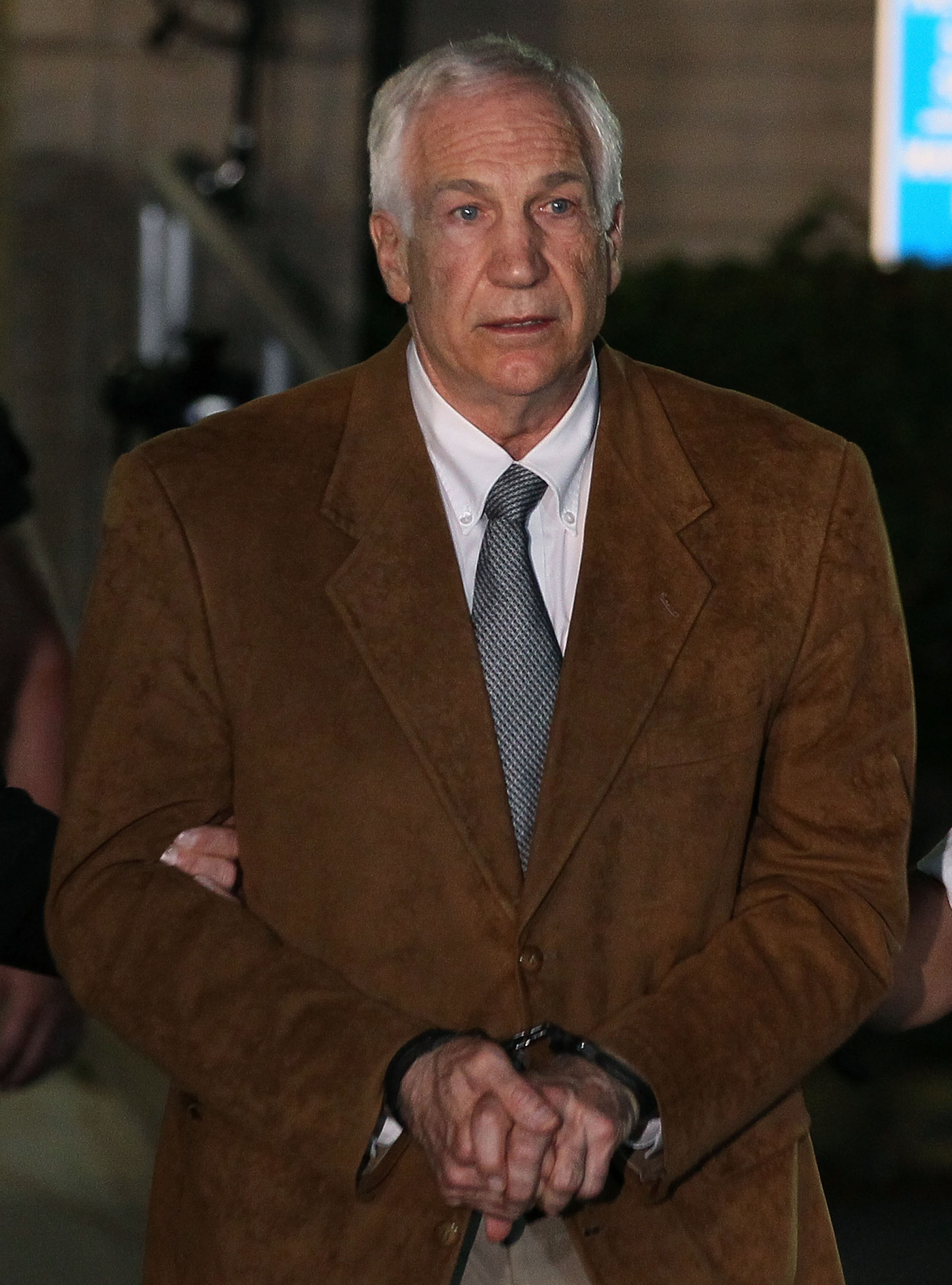 But Paterno never notified law enforcement and didn't tell his superiors until the day after McQueary reported the incident — or two days after the assault in teh shower. Paterno called Curry and Schultz. The report says Paterno didn't "want to interfere with their weekends."

Freeh's report is now online here. In its executive summary, the four Penn State officials are said to have "exhibited a striking lack of empathy for Sandusky's victims." And, says the report, "these individuals, unchecked by the Board of Trustees that did not perform its oversight duties, empowered Sandusky to attract potential victims to the campus and football events by allowing him to have continued, unrestricted and unsupervised access to the University's facilities."

Wednesday, as we reported, Paterno's family issued a pre-report statement saying that he never covered up anything. The family also questioned "the fairness and confidentiality of the investigative process."

"What happened, if anything, that allowed Jerry Sandusky to do what he did over many years?"

"Was there an active coverup?" by Penn State officials.

What did legendary coach Joe Paterno know and when did he know it?

As NPR's Tom Goldman said earlier on Morning Edition, those are some of the key questions that we may get answers to at 9 a.m. ET. That's when former FBI Director Louis Freeh and his team of investigators release results of their investigation into the university's handling of reports that former assistant football coach Jerry Sandusky had been sexually abusing young boys, sometimes on the school's campus.

Sandusky was convicted last month of 45 counts of sexual abuse involving 10 boys over a 15-year period.

The scandal over his actions and allegations that Paterno and other university officials didn't do enough to raise an alarm about what was happening, led to the firing last fall of Paterno and the school's president at the time, Graham Spanier.

Paterno died in January. His family says he never tried to cover up anything and has said that email leaks about what is in the report — especially those indicating that Paterno may have wanted the Sandusky matter to be handed internally, by the university — "have raised questions about the fairness and confidentiality of the investigative process."

The Freeh report is due to be posted here at 9 a.m. ET.

We'll be updating with news from the report.

For background on the Freeh investigation, see this story from Harrisburg's Patriot-News.

And that newspaper's extensive coverage of the scandal (for which it won a Pulitzer Prize) is collected here.