Accessibility links
fishers, marijuana, California : The Two-Way The fisher, a weasel-like animal, is already a candidate for protection under the Endangered Species Act. Now, researchers have evidence that the animals have been exposed to lethal poison used by power growers to protect their plants from animals.

Already among the animals that may be added to the list of those protected by the Endangered Species Act, the weasel-like fisher now faces this deadly threat:

Rat poison that illegal marijuana growers put out to protect their crops in California.

In a paper posted today by the journal PLoS ONE, researchers from University of California Davis, federal and state agencies, and the nonprofit Integral Ecology Research Center report that: 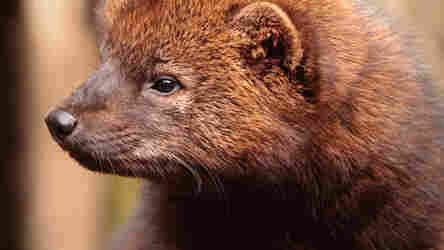 A fisher. It now has another challenge. U.S. Fish & Wildlife Service hide caption

-- Of 58 fisher carcasses they recently tested, 46 of them (79 percent), had been exposed to an "anticoagulant rodenticide." And at least four of the deaths were "attributed to lethal toxicosis, indicated by AR exposure." The animals had died in the years 2006-2011. They lived in two isolated groups; one in the "northern Sierra Nevada/southern Cascade Mountain borderlands of north central California" and the other in southern Sierra Nevada mountains.

-- The "likely source of AR exposure to fishers is the emerging spread of illegal marijuana cultivation within California public and private lands." Growers put out the poison to keep animals from eating their crops.

Four deaths directly attributable to AR may not seem like many. But consider this: Recent studies indicated that just just handfuls of fishers — sometimes in the low teens or less — were living in areas of Northern California and Oregon covering hundreds of miles.

Add that to the other challenges that fishers face, including, the Fish & Wildlife Service says:

"Loss and fragmentation of habitat due to timber harvest, roads, urban development, recreation, and wildfires. ... Small population sizes and isolation, predation, and human-caused mortality from vehicle collisions, poaching, and incidental capture and injury."