Accessibility links
A Litany Of Victims: Dispatch Tapes Reveal Chaos, Bloodshed Of Mass Shooting : The Two-Way The recordings are a document of the first minutes following the mass shooting in Colorado. 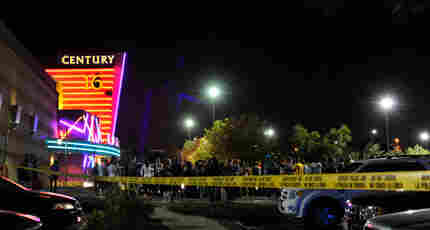 Calls to police started coming in at about 12:30 a.m. from a theater in Aurora, Colo., showing "The Dark Knight Rises." Karl Gehring/The Denver Post via AP hide caption

It's hard to listen to the 16-minutes of audio coming from the Aurora Police dispatch. It begins with the first reports of a shooting at a movie complex.

At about two minutes into the recording, you hear reports that "someone is spraying gas." Then as police begin arriving at the scene, they start asking dispatch to send more officers, to send more ambulances.

"I got people running out of the theater that are shot," one officer says.

Another one requests gas masks. A shooter might still be inside theater 9, one officer says. But the auditorium is filled with gas and the offficers need gas masks.

Can anyone get gas masks to theater 9, she asks.

In between, you can hear sirens, you can hear heavy breathing, you can sometimes hear the stress of the situation in the voice of the officers.

"Get us some damn gas masks for the theater now," one officer says. "We can't get in."

At about five minutes into the recording, an officer outside the theater calls in to report a "suspect in a gas mask." He calls for back up.

As Mark reported, Aurora Police Chief Dan Oates said that when James Holmes was arrested, he was wearing a ballistic helment, ballistic vest, gas mask and other protective gear.

It's about at that point in the tape, when police apprehend the suspect and make their way into theater nine that officers begin reciting what sounds like a sad, litany of victims.

They ask for ambulances or even police cruisers, anything that can help rescue victims.

One is shot in the face, one emergency worker says. One is immobile. Another has been shot twice in the back. "I have a child victim near the back door," one officer says.

"Where are my ambulances at?" one police man asks. Another notes that one victim has been "eviscerated."

At minute 14, you hear an officer coughing. You hear what sounds like a fire alarm and you hear more sirens.

One of the officers says he has another victim who's been shot in the neck. It's chaos and one officers pleads for ambulances at the back of theater nine. "Any available," the officer says sounding resigned.

Update at 9:40 a.m. ET, July 21: The latest word from authorities is that 12 people have died from wounds suffered in the shooting rampage and about 58 others were wounded. (Earlier, police had said a total of 71 people were shot; it appears one person may have been counted twice in that previous estimate.)