Accessibility links
If Not For Jammed Gun, More Might Have Died In Aurora : The Two-Way A dazed-looking James Holmes, his hair dyed a reddish orange, said nothing. He mostly stared down and ahead. Meanwhile, authorities say more likely would have died, but the gunman's semiautomatic assault rifle apparently malfunctioned. 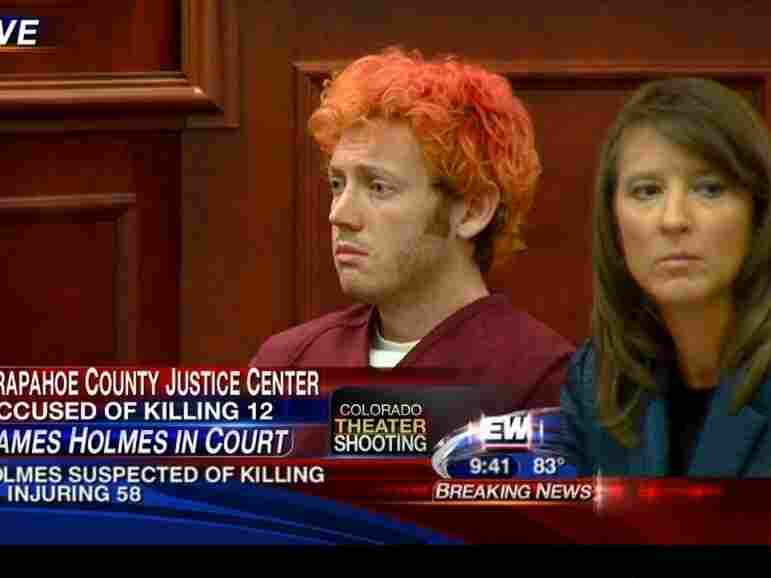 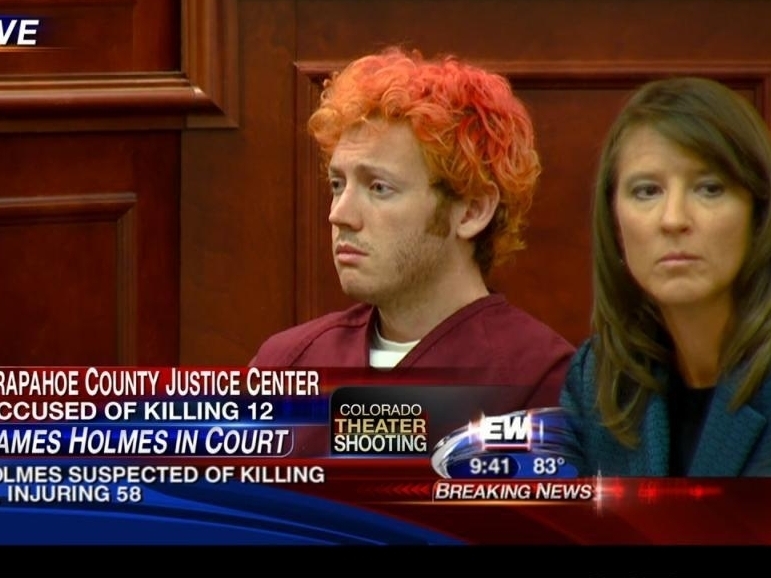 James Holmes, in an Arapahoe County, Colo., court on Monday.

A dazed-looking James Holmes, his hair dyed a reddish orange, made his first court appearance this morning as the state of Colorado began its case against the man arrested at the scene of Friday's massacre in Aurora, Colo., where 12 people were killed and an additional 58 were wounded.

It was a short hearing in an Arapahoe County, Colo., courtroom, starting at 11:30 a.m. ET. He'll be formally charged next Monday, the judge announced.

Holmes mostly stared downward and straight ahead. He said nothing. Court-appointed public defenders spoke briefly for him, saying they had advised him of his rights.

This morning's court appearance was not an arraignment, Arapahoe County District Attorney Carol Chambers just told reporters. It was a hearing to find probable cause — in this case for "first-degree murder," she said. Chambers also said it could be a year before the case goes to trial.

Our original post from 7:25 a.m. ET — "If Not For Jammed Gun, Officers' Sharp Eyes, More Might Have Died In Aurora:" 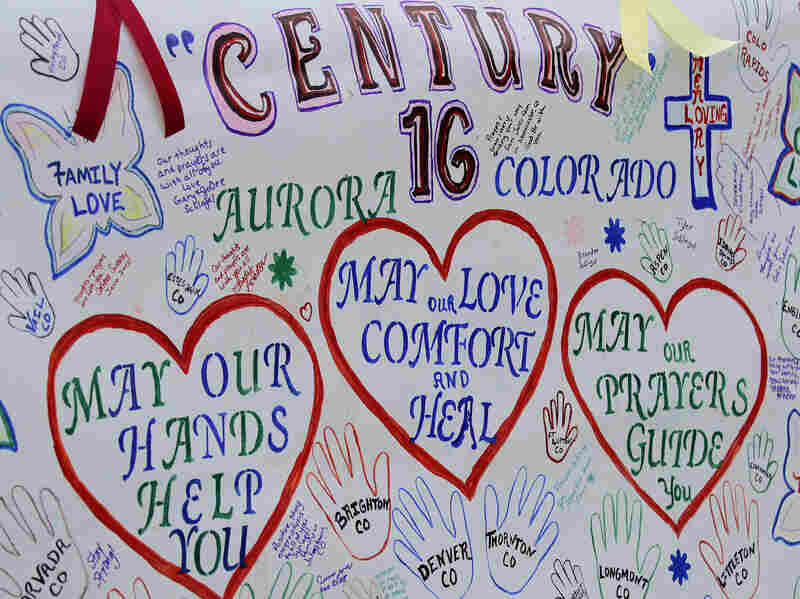 A banner with messages has been put up outside the theaters in Aurora, Colo., where 12 died and 58 were wounded early Friday. Joshua Lott/Getty Images hide caption 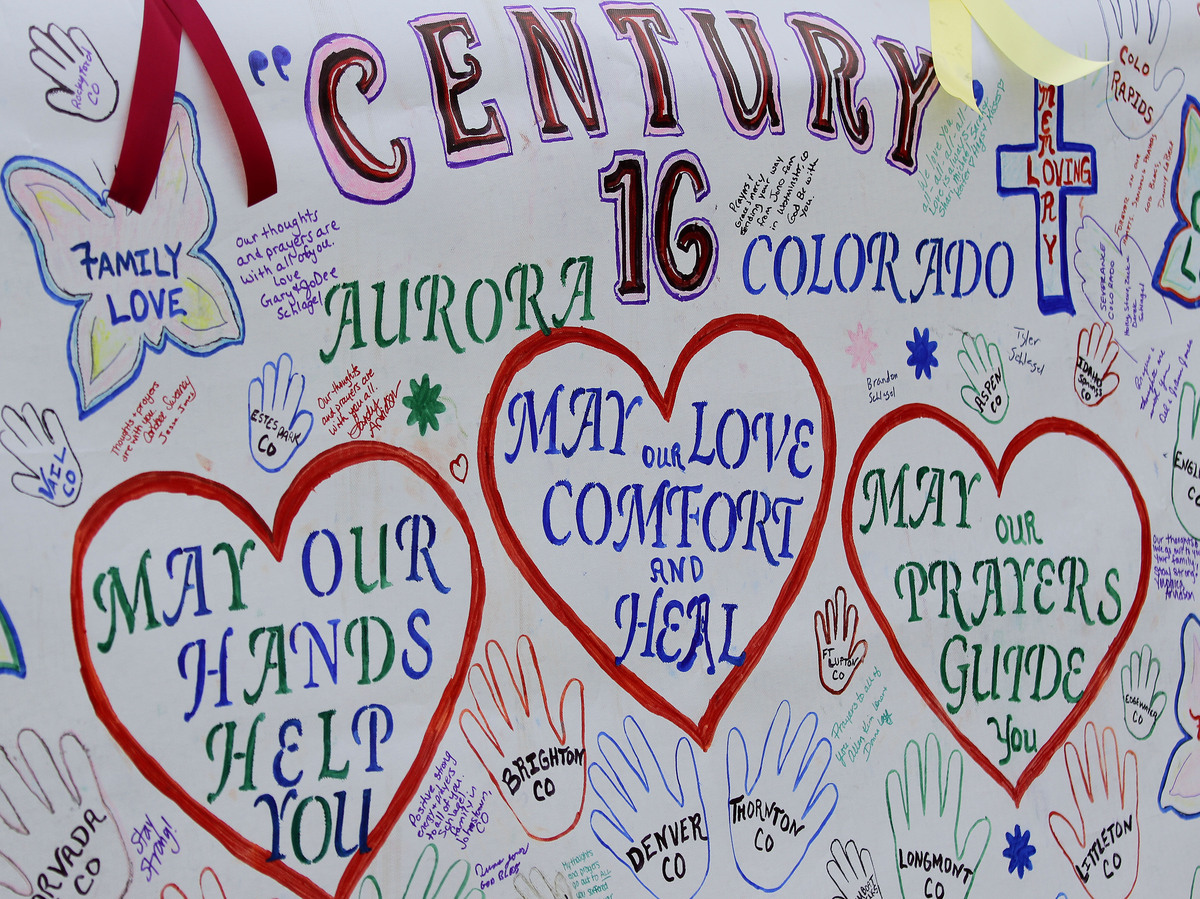 A banner with messages has been put up outside the theaters in Aurora, Colo., where 12 died and 58 were wounded early Friday.

As we wait for news from a scheduled 11:30 a.m. ET court hearing for James Holmes, we're learning more about the suspect and the horrible attack at an Aurora, Colo., movie theater early Friday that left 12 people dead and at least 58 others wounded:

-- "The gunman's semiautomatic assault rifle jammed ... forcing him to switch to another gun with less firepower, a federal law enforcement official told The Associated Press. That malfunction and weapons switch might have saved some lives."

-- Because Holmes was dressed in ballistic gear similar to that worn by members of police SWAT teams, Aurora Police Chief Dan Oates said on CBS-TV's Face the Nation that he is " 'so proud' of two officers who spotted part of Holmes' costume that differs from what a SWAT team member would be wearing. 'So kudos to my two cops who grabbed this guy and that sharp observation that they made immediately that led them to suspect him as being the suspect,' Oates said." The police chief did not go into detail about what it was that the officers noticed.

Holmes was apprehended, authorities have said, just outside the rear of the theater.

-- While stories about Holmes continue to paint a picture of a young man who had been an excellent student and not someone who stood out, The Denver Post reports that the suspect's actions in recent weeks had made some "neighbors and others take notice." For example, the owner of a gun range rejected Holmes' application to join the club after hearing what he said was the suspect's "deep, guttural voice, rambling something incoherent" on an answering machine message.

-- According to the AP, authorities say Holmes "is refusing to cooperate and that it could take months to learn what prompted the horrific attack."

-- And while much attention continues to be paid to the questions about who Holmes is and what he allegedly did, many Americans are spending more time remembering the victims. They are, as President Obama said Sunday, the "good people who were impacted by this tragedy."

Denver's KUSA-TV has a story on "how you can help" that includes information on nonprofit charities that are raising money for the victims and their families.

On Morning Edition today, NPR's Carrie Kahn reported about one survivor's effort to focus on "positivity," and Colorado Public Radio's Megan Verlee spoke with host Steve Inskeep about the investigation.