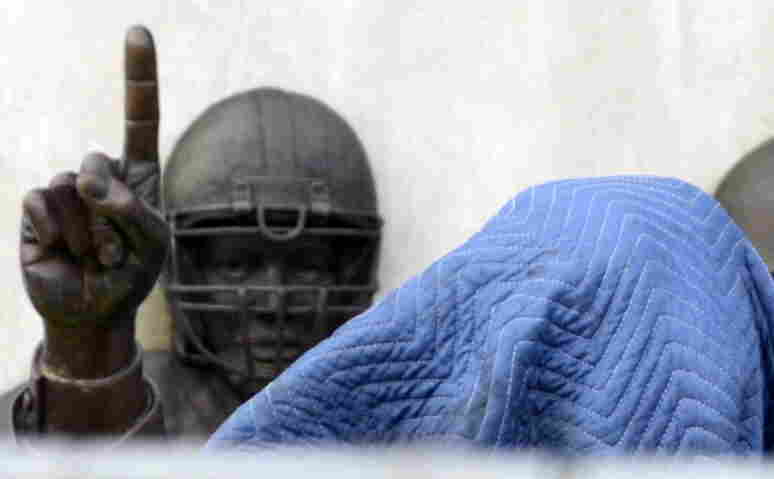 Before its removal from outside the school's football stadium on Sunday, a statue of former football coach Joe Paterno was covered. An independent report concluded he was among top university officials who failed to act when they learned that Jerry Sandusky might be sexually abusing young boys. John Beale/AP hide caption 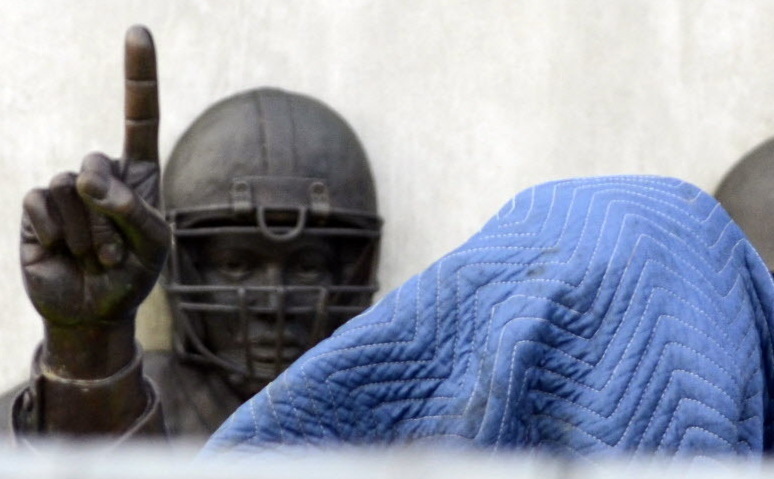 Before its removal from outside the school's football stadium on Sunday, a statue of former football coach Joe Paterno was covered. An independent report concluded he was among top university officials who failed to act when they learned that Jerry Sandusky might be sexually abusing young boys.

Saying that the punishment is "warranted by the conspiracy of silence" among Penn State University's top leadership that turned a blind eye to former assistant football coach Jerry Sandusky's sexual abuse of young boys, the NCAA just announced sanctions on the school that include:

-- A $60 million fine. The money will go into an endowment fund to support programs around the nation that assist victims of sexual abuse, NCAA President Mark Emmert said.

-- A ban on participation in post-season football bowl games for four years.

-- A reduction in the number of football scholarships from 25 to 15 for four years.

-- The vacating of all the football team's wins for the years 1998-2011. It was in 1998 that university officials first heard that Sandusky might be sexually abusing young boys.

The school, Emmert said, had allowed its athletic culture to go "horribly awry." And without naming former head coach Joe Paterno, Emmert said the school had allowed one person to become too powerful.

Update at 3:30 p.m. ET. Emmert Says Penn State Needs To Worry About Fixing Its Culture, Not Going To A Bowl Game:

Earlier this afternoon, All Things Considered host Robert Siegel asked Emmert why — if the NCAA didn't want to impose the death penalty because that would punish too many people, including players, who had nothing to do with Sandusky's crimes or any coverup of them — it is denying current players the chance to go to bowl games?

That sanction is "certainly meant to have a punitive impact on the institution," Emmert said, not the players. And the message it should send, he added, is that "for the next four or five years, Penn State, don't worry about going to the Rose Bowl; worry about getting your culture right."

Much more from Robert's conversation with Emmert is due on today's All Things Considered. Click here to find an NPR station that broadcasts or streams the show. Later, we'll add the as-broadcast version of the interview to the top of this post.

"The NCAA sanctions on Penn State, taken in sum, far exceed the severity of shutting down a program for a year or two. Our sanctions address the cultural change necessary at Penn State. What some refer to as the death penalty was not severe enough."

As for the vacated wins, the NCAA says:

"All wins are removed from the NCAA's official records. Wins attributed to the coach of a team whose penalties are vacated will also be expunged. Opposing teams are not granted wins."

"Because Penn State will be ineligible for bowl games for the next four years, it will therefore be ineligible to receive its share of Big Ten Conference bowl revenues over those same four years," the athletic conference just announced. "That money, estimated to be approximately $13 million, will be donated to established charitable organizations in Big Ten communities dedicated to the protection of children."

University President Rodney Erickson: "Our thoughts and prayers continue to be with the victims of Mr. Sandusky and all other victims of child abuse. ... Against this backdrop, Penn State accepts the penalties and corrective actions announced today by the NCAA. With today's announcement and the action it requires of us, the university takes a significant step forward."

Football coach Bill O'Brien (who was hired after last season): " I will do everything in my power to not only comply, but help guide the university forward to become a national leader in ethics, compliance and operational excellence."

Though the university did not get the NCAA's so-called death penalty, which would have banned the football team from competing for at least one season, The Pittsburgh Post-Gazette says the punishments are likely to have an even "more crippling effect" because of their length and severity. Barring Penn State from postseason play for four years, for example, may make it difficult to recruit top players. And current players will be allowed to transfer to other schools without having to wait to compete again.

Update at 10 a.m. ET. Big Ten To Announce Its Penalties.

Update at 9:35 a.m. ET. Paterno Is No Longer Division I Record Holder:

As USA Today points out, just before his firing last November, Paterno had set the record for most wins as a Division I football coach — with 409. Wiping away the wins from 1998-2011 removes 111 victories from his record, the newspaper says. So, "the loss of victories means Joe Paterno is no longer college football's winningest coach." (Note at 10:55 a.m. ET: USA Today has corrected its report to say the penalty erases 111 wins, not 112."

"With the wins from 1998-2011 vacated, Paterno drops from 409 wins to 298, dropping him from first to 12th on the winningest NCAA football coach list. Penn State will also have six bowl wins and two conference championships erased."

Asked if he expects the school will file an appeal, Emmert just told reporters that Penn State has signed an agreement accepting the punishments.