Accessibility links
Gun Sales Are Up Sharply In Colorado Since Theater Shootings : The Two-Way After other mass shootings, sales also surged. Some buyers want weapons for protection. Others think gun laws will be tightened in response to the news.

Gun Sales Are Up Sharply In Colorado Since Theater Shootings

Gun Sales Are Up Sharply In Colorado Since Theater Shootings

Sales of guns have risen strongly in Colorado since the early Friday shootings at a movie theater near Denver that left 12 people dead and 58 wounded.

-- "Between Friday and Sunday, the Colorado Bureau of Investigation approved background checks for 2,887 people who wanted to purchase a firearm — a 43 percent increase over the previous Friday through Sunday and a 39 percent jump over those same days on the first weekend of July." 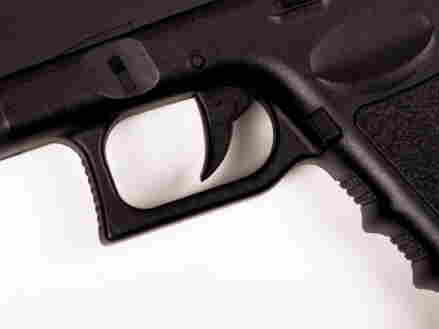 "It's been insane," Jake Meyers, an employee at Rocky Mountain Guns and Ammo in Parker, told the newspaper.

We're seeing a few stories about surging sales from other parts of the nation as well. KTEN-TV reports from Durant, Okla., for example, that "area gun shops say they've seen an increase in traffic of people purchasing fire arms.

Also today, TheStreet.com reports that shares of stock in gun manufacturers have "outperformed the broader market during the past two trading days." Investors are betting those companies (Smith & Wesson; Sturm, Ruger & Co.) will see a boost in sales as some buyers get weapons for protection and others get them out of fear that gun laws will be tightened in reaction to the Aurora shootings.

There were similar surges in sales after the 2011 shooting rampage in Tucson, Ariz., and the 2007 massacre at Virginia Tech.