Accessibility links
One Clue To Romney's Veep Pick: Whose Wiki Page Is Getting The Most Edits? : The Two-Way If campaign aides get busy scrubbing those Wiki pages, it could be a sign that a choice has been made. That's what happened in 2008. Right now, Republican Sen. Rob Portman's Wiki page seems to be getting the most activity.

One Clue To Romney's Veep Pick: Whose Wiki Page Is Getting The Most Edits?

One Clue To Romney's Veep Pick: Whose Wiki Page Is Getting The Most Edits? 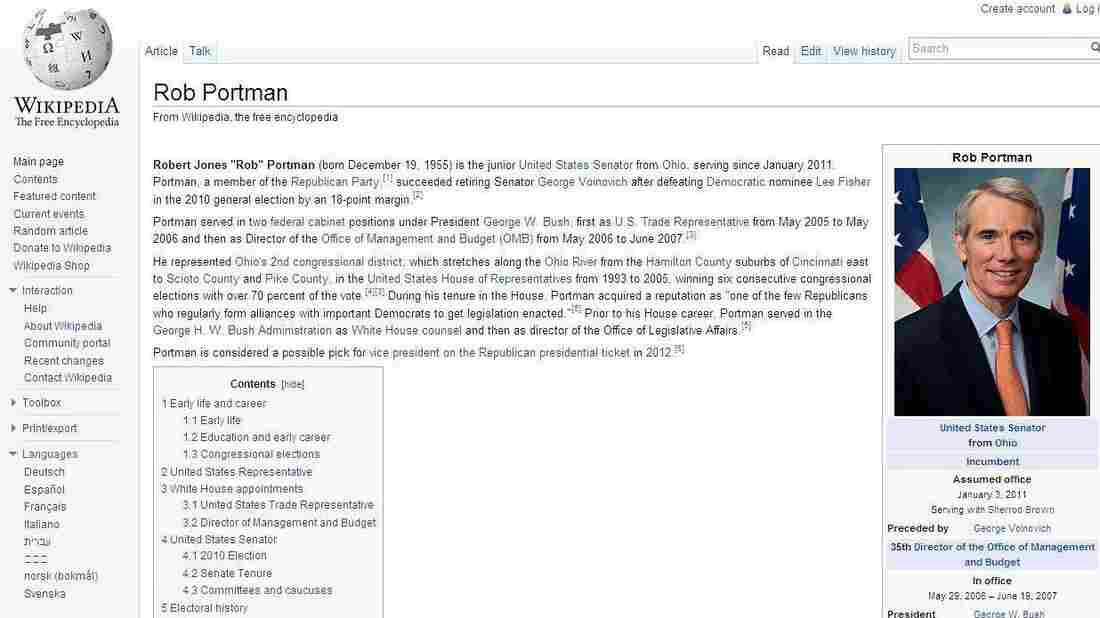 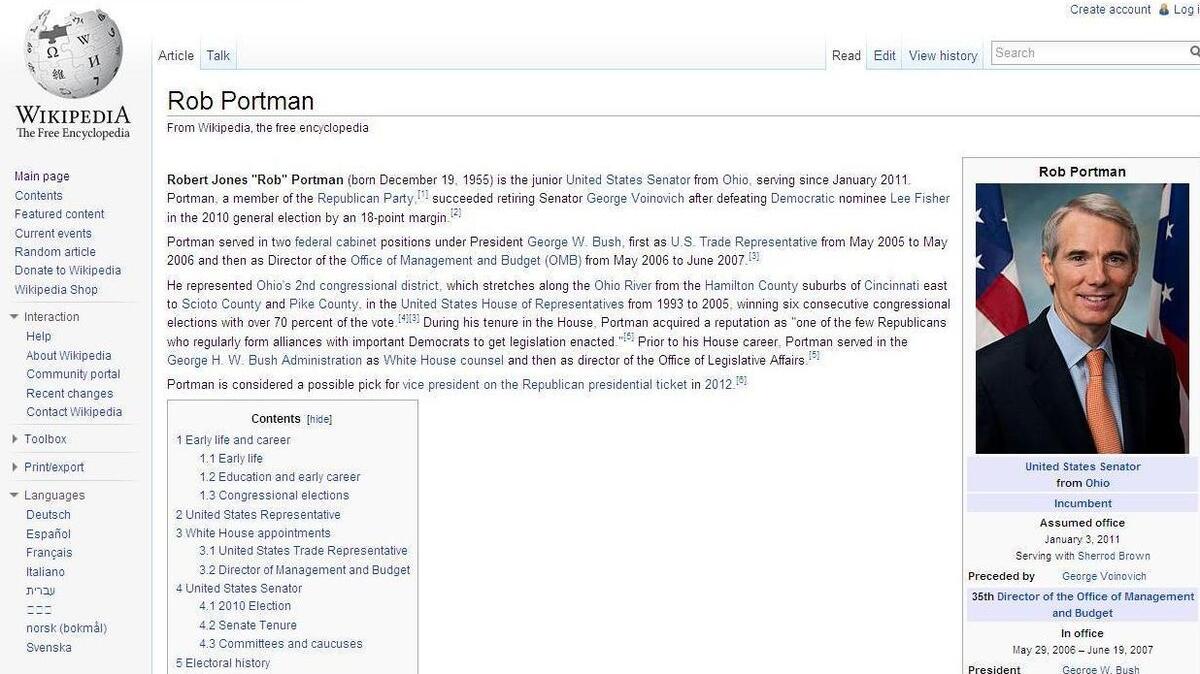 Tech President reminds us that one way to possibly figure out who will be a vice presidential pick is to watch the various contenders' Wikipedia pages in the days before such an announcement is likely.

In 2008, as The Washington Post wrote at the time, "just hours before [Sen. John] McCain declared his veep choice of Alaska Gov. Sarah Palin, her Wiki page saw a flurry of activity, with editors adding details about her approval rating and husband's employment. ... Palin's entry was updated at least 68 times, with at least an additional 54 changes made to her entry over the preceding five days."

Meanwhile, the Post said, "on Aug. 22, the day before the Obama campaign officially named [then-Sen. Joe] Biden as the veep pick, Biden's Wiki page garnered roughly 40 changes. Over the five days prior, users would make at least 111 other changes to his entry."

The obvious — in hindsight — implications of the Wiki activity: Aides were going into the entries to tune them up and clean out any material that was either embarrassing or erroneous.

So what's going on now with some of those said to be among the leading possibilities to be joining Mitt Romney on the Republican ticket?

-- New Hampshire Sen. Kelly Ayotte's Wiki page has not been touched today. It was last revised on July 28.

Of course, somebody who knows about the 2008 Wiki tea leaves may just be messing with our minds.

And, as Tech President also noted, in 2004 it was "an obscure aviation website" that noticed a John Kerry campaign plane had been repainted to include the name Edwards. And that's how word that then-Sen. John Edwards would be the Democratic vice presidential pick first broke.

Could it be that reports by outlets such as The Two-Way have sparked some mischief?

Portman's page has already been touched 13 times today. On Tuesday, it ended up being changed 98 times.

Rubio's page has been busy too — 22 changes so far today and a total of 28 on Tuesday.

There have been 14 changes to Pawlenty's page as of this hour today, and there were five on Tuesday.

Ryan's page has been busy too — 39 changes so far today and a total of nine on Tuesday.

There have been 10 changes to Jindal's page so far today. On Tuesday there ended up being five.

Someone's been tweaking Ayotte's page. There have been three changes so far today.

And Christie's page has suddenly gotten a fair amount of attention. There were two tweaks on Tuesday and so far today there have been 40 edits.

For those who've seen stories in recent days about the possibility of CIA Director Gen. David Petraeus being Romney's choice, be aware of this: His Wiki page hasn't been touched since Saturday and has only been tweaked three times so far this month.