Accessibility links
Amazingly Earth-like: Curiosity Beams First Full-Frame Photo Of Mars : The Two-Way One NASA scientist joked that one would be forgiven for thinking the agency was pulling a fast one by placing a rover in the Mojave Desert and saying it's on the Red Planet.

For the most part, it's very much inside baseball. The scientists talk about the nitty gritty details of getting the Curiosity Rover going and onto doing some science. They talk about reorienting antennas and about how a higher-than-predicted temperature won't have a significant effect on the mission.

But during today's conference we got an amazing view of the Red Planet. They gave us the rover's first full-frame photographs, which shows the rim of the Gale Crater (click here for a bigger view): 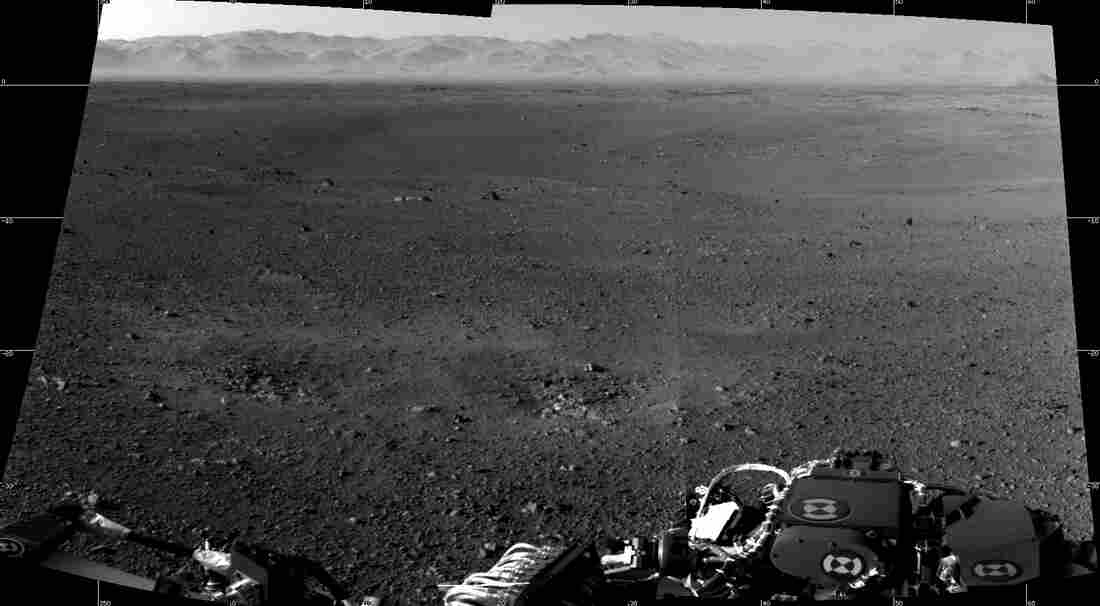 A photograph taken by NASA's Curiosity Rover on Mars. The rim of Gale Crater can be seen in the distance beyond the pebbly ground. NASA/JPL-Caltech hide caption 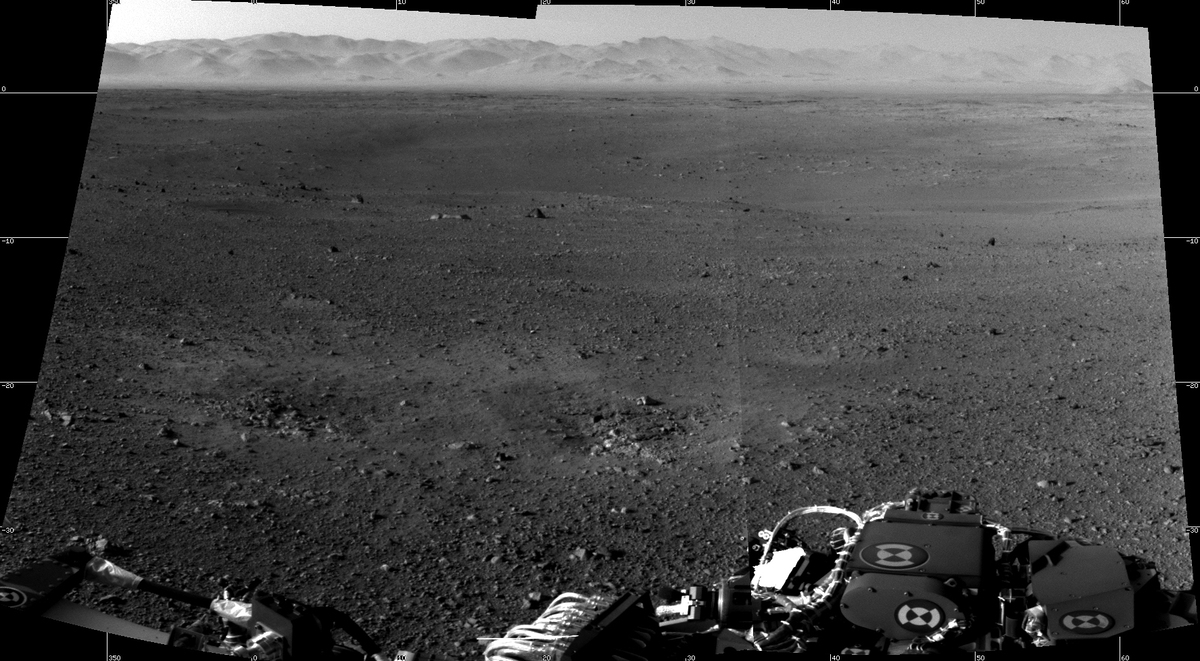 A photograph taken by NASA's Curiosity Rover on Mars. The rim of Gale Crater can be seen in the distance beyond the pebbly ground.

It was obvious that John Grotzinger, the mission's project manager, was excited about the image. He started by cracking a joke.

"You would be forgiven if you thought NASA was pulling a fast one and dropped a rover in the middle of the Mojave Desert," he said to laughs. But, no, this is Mars and it is just stunning how Earth-like it is.

Grotzinger also pointed out a curious detail in the picture: You can see the indentations left behind by the rockets used by the spacecraft to land. Grotzinger said this is welcome happenstance, because it means the rover will save some time by not having to dig.

He also noted that what we can see underneath all the dust is bedrock.

Here's what JPL has to say about the scenary you're seeing in the photo: "The topography of the rim is very mountainous due to erosion. The ground seen in the middle shows low-relief scarps and plains. The foreground shows two distinct zones of excavation likely carved out by blasts from the rover's descent stage thrusters."

NASA also released some panoramic photographs. Those are low-resolution thumbnails though and mostly intended to give the scientists an idea of any obstacles facing the rover. (We'll add those once NASA makes them available.)

But the big news of today is that so far, it's looking great for the rover. It looks like it has free rein to roam.

On Monday, NASA shared a low-resolution video of the spacecraft's descent, which NASA has described as "seven minutes of terror."

We will eventually see a full-resolution version of that video, but NASA has teases us, today, with the first full-resolution frame from that series. (Remember, this data is traveling millions of miles, so it takes a while.) 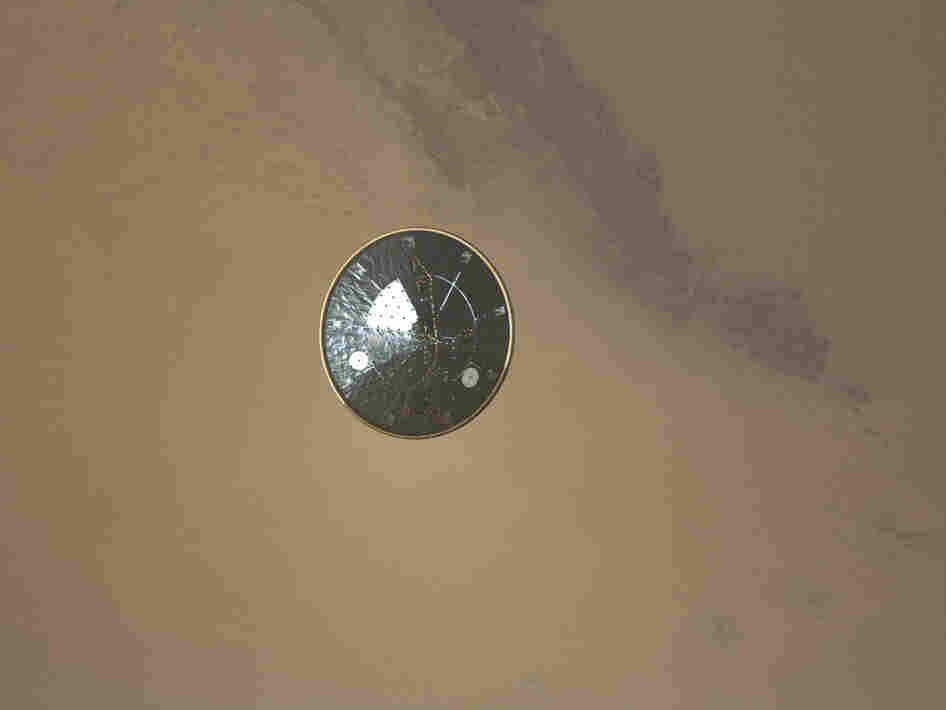 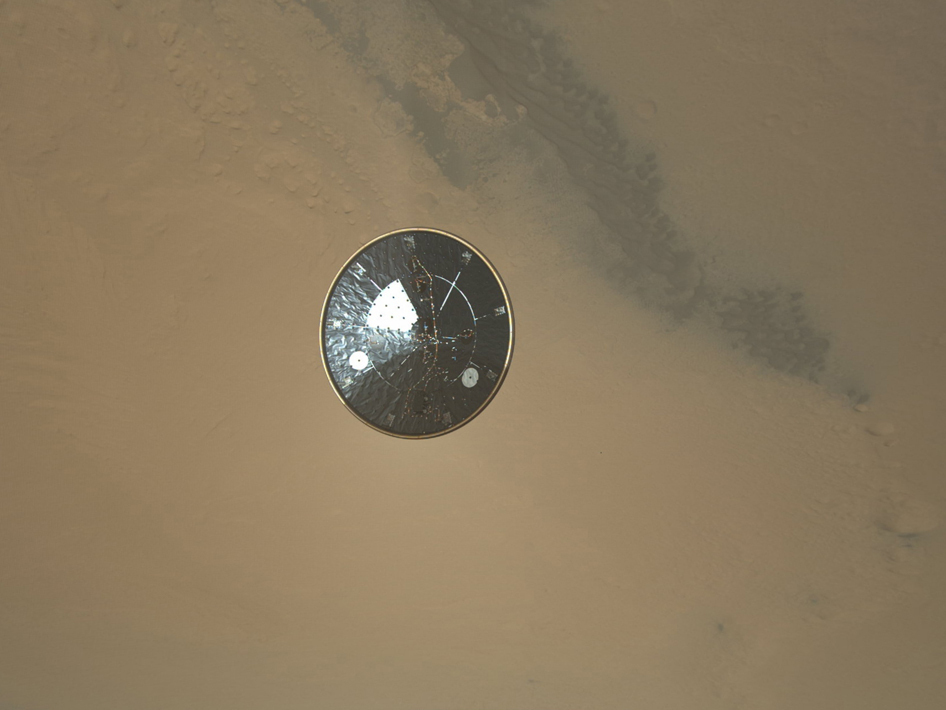 The heat shield as seen by a descending Mars Curiosity Rover.

What you're seeing in that picture is the heat shield, just as the spacecraft shed it.