Accessibility links
In Wisconsin, Thousands Pay Homage To Sikh Temple Shooting Victims : The Two-Way After a public wake and visitation this morning, members of the temple that was attacked will gather for an "akhand path." During that rite, priests will read aloud the religion's holy book. It will take about 48 hours. 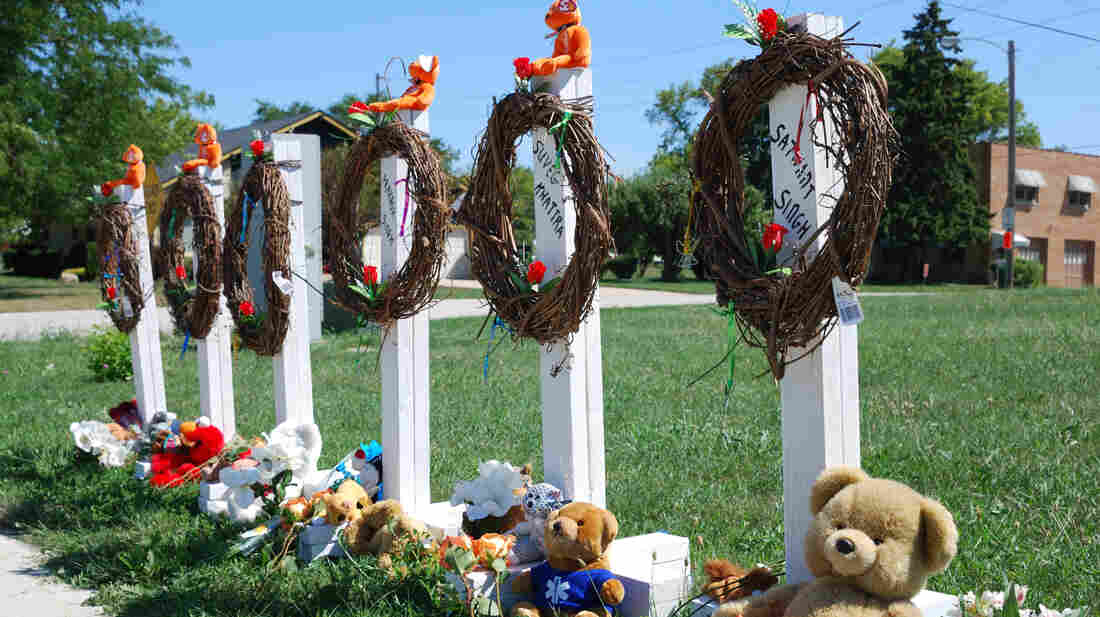 A makeshift memorial outside the Sikh Temple of Wisconsin in honor of the six people who were killed there. Mira Oberman /AFP/Getty Images hide caption

Several thousand people from across the U.S. and the world are expected in Oak Creek, Wis., today as Sikhs gather to mourn for the six people killed during Sunday's shooting rampage at a temple.

According to Milwaukee's Journal Sentinel, things will begin at 10 a.m. ET with a two-hour visitation and wake in the gymnasium of Oak Creek High School. Oak Creek Mayor Steve Scaffidi expects more people will attend than were at a vigil in the city Tuesday night, when 3,000 gathered. Among those expected to speak is U.S. Attorney General Eric Holder.

Afterward, the victims' families will gather for cremations.

Later today, members of the Sikh temple will begin a traditional rite called an "akhand path." According to The Associated Press, it is "a ceremony that involves a series of priests reading their holy book aloud from cover to cover. The process, which takes 48 hours, is intended to honor the memories of the six victims."

You can read an English translation of that holy book, the Guru Granth Sahib, here.

Our colleagues at Milwaukee's WUWM have a report here about the six people who were killed. The station also posted a conversation that correspondent Bob Bach had with one member of the temple, Rajinder Singh. "Our heart is broke," Rajinder Singh said.

The shooting, Attorney Gen. Eric Holder told those at the service, was "an act of terrorism ... a hate crime." But since then, he said, Sikhs have "inspired the very best in who we are" by the way they have reacted.

"We stand with you to mourn with you and to pray with you," Attorney Gen. Eric Holder just told those gathered at the high school gym. The nation, he said, is "united today, not only by a shared sense of loss ... but by a common belief in the healing power of faith."

At the high school moments ago, Wisconsin Gov. Scott Walker (R) told the Sikh community that "today, we mourn with you, we pray with you and we support you."

Update at 10:50 a.m. ET: Milwaukee's WTMJ-TV is streaming coverage of the service here.