The world of competitive Scrabble was jolted yesterday: One of the games' most promising players admitted he was hiding blank letter tiles.

As Mark wrote last year, a similar accusation of cheating was made at the World Scrabble Championships in 2011. But officials refused to strip search the man as an opponent demanded, because there wasn't sufficient evidence.

But as the AP notes, this time around at the national championship in Orlando, a player complained that one of his opponents — who was not named because he was a minor — was trying to conceal extra blank tiles by dropping them on the floor. When confronted, the player admitted to cheating and was ejected in round 24 of 28.

The AP reports that John D. Williams, the executive director of the National Scrabble Association and a Scrabble historian, said this kind of cheating has been known to occur at smaller tournaments.

"It's the first time it's happened in a venue this big though," he said. "It's unfortunate. The Scrabble world is abuzz. The Internet is abuzz." 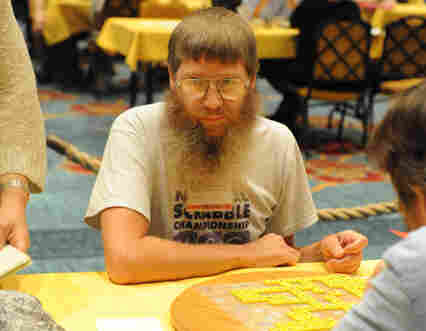 And in spite of all the doping jokes, the game went on and Nigel Richards made history on two fronts today: He became the first player to win four National Scrabble Championships and the first to win three titles in a row.

Here's how North American Scrabble Players Association explained the last, dramatic move Richards, who came from behind for the win, made:

NPR commentator Stefan Fatsis is scheduled to talk with All Things Considered about the scandal later on this afternoon. We'll take a listen and update this post.

Stefan Fatsis, the author of Word Freak: Heartbreak, Triumph, Genius, and Obsession in the World of Competitive Scrabble Players, was at the tournament this week.

He told All Things Considered's Audie Cornish that the cheating incident "really put a dark cloud over the tournament."

Stefan also explained that the cheating player squirreled away the blank tiles before the game started. When he was confronted by a fellow player, he threw the tiles on the floor.

Stefan said the incident left the young players "shaken." Cheating, he said, is not common in the game.

"People love this thing so much," he said, "[they] don't want to mess with the Karma."

In some ways, Richards' outstanding victory made up for the bad press. Toward the end, Richards was down 169 points. And he managed a four-bingo score — in other words four seven-or-eight letter words — to win by 7 points.

Much more of Audie's conversation with Stefan on tonight's All Things Considered. We'll post the as-aired version of the interview on this post in a bit.