Accessibility links
Alabama Authorities Put A Real-Life Walter White On Their Most Wanted List : The Two-Way That's the name of the main character — a science teacher who's become a meth cooker and a killer — on AMC's Breaking Bad. It's also the name of a man wanted for meth production in Alabama. Life is imitating art. 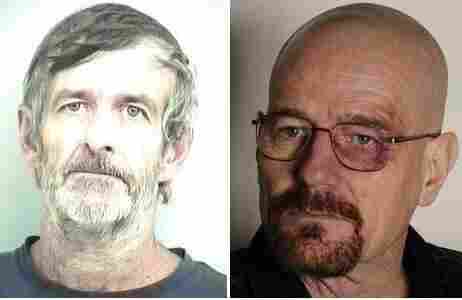 In this case, life is imitating art:

"The Tuscaloosa County Sheriff's Office has placed Walter White on their priority list of the county's most wanted," The Tuscaloosa News reports. "White, 55, was on probation for a 2008 charge of making methamphetamine when he was arrested on similar charges in Bibb County earlier this year."

His "most wanted" page on the sheriff's website is here.

As fans of AMC's Breaking Bad can tell you, "Walter White" is the "high school chemistry teacher and father of two" who turns into a producer of the highest-quality meth in New Mexico. He's also become, over the show's five seasons, rather skilled at killing those who get in his way. (He's played by actor Bryan Cranston.)

If the real Walter is anything like the TV Walter, we suggest it would be best to call the sheriff rather than try to approach him.