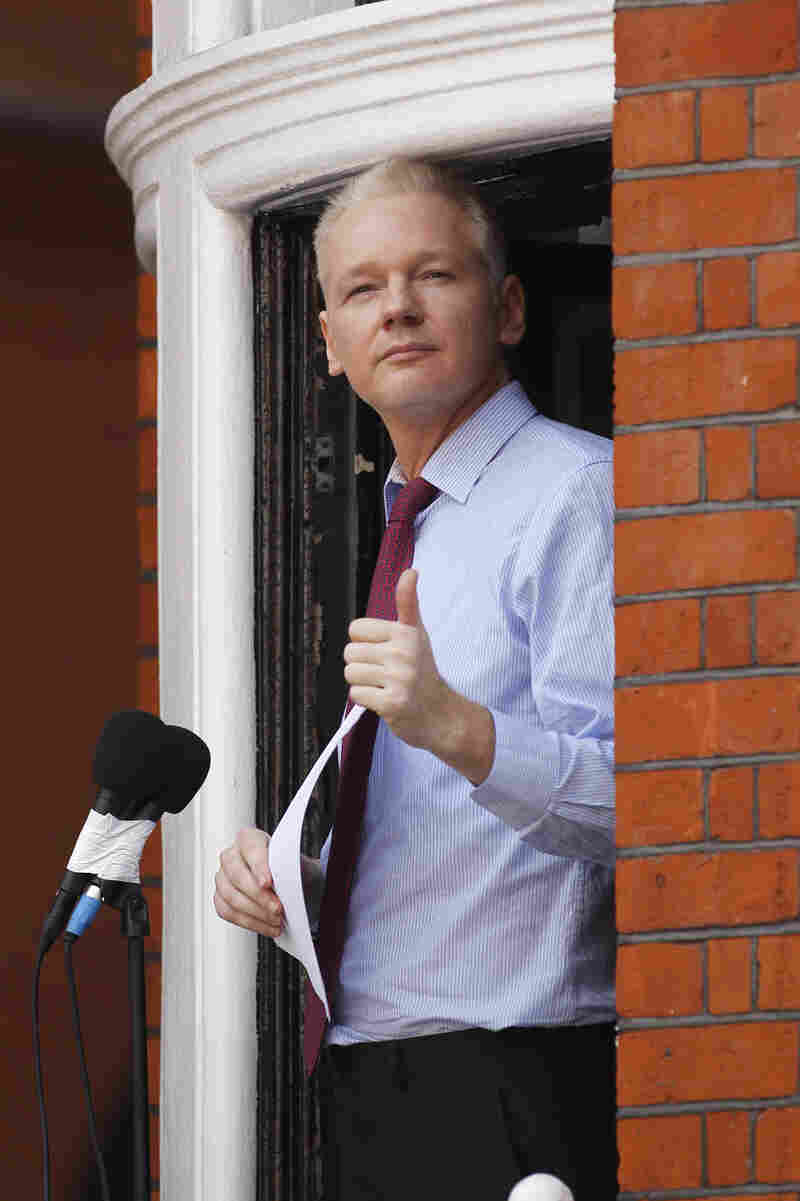 Julian Assange, founder of WikiLeaks, makes a statement from a balcony of the Ecuadorian embassy in London on Sunday. Sang Tan/AP hide caption 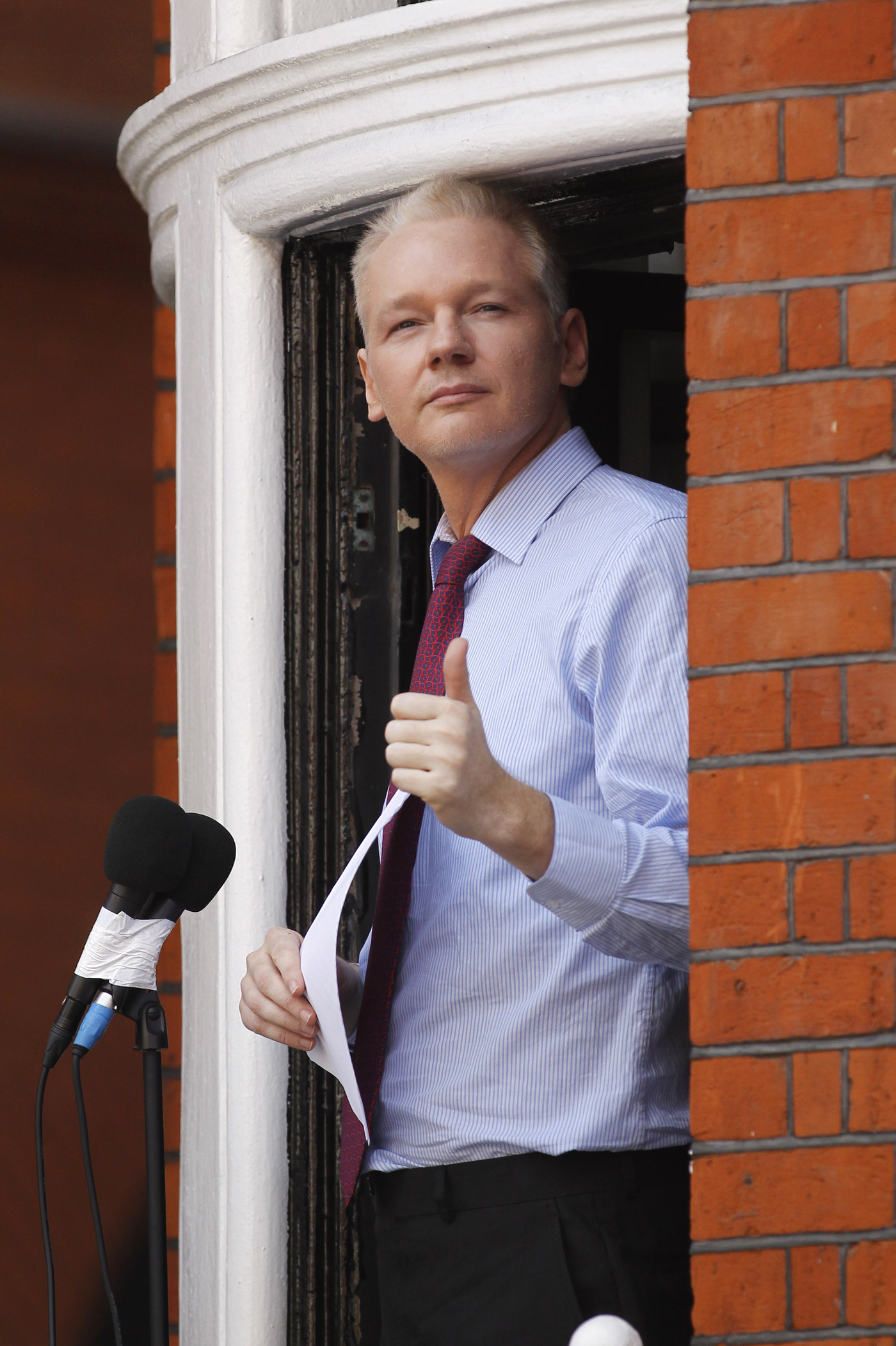 Julian Assange, founder of WikiLeaks, makes a statement from a balcony of the Ecuadorian embassy in London on Sunday.

Julian Assange stepped onto a balcony of the Ecuadorian embassy in London Sunday to demand that the U.S. end its persecution of WikiLeaks. It was his first public appearance since taking refuge inside the embassy in June.

"I ask President Obama to do the right thing," he said. "The United States must renounce its witch hunt against WikiLeaks."

Also in his brief statement, Assange thanked Ecuador, its president and several other supportive Latin American states before turning his attention to the United States and Britain. The Guardian has a few quotes:

"There must be no more foolish talk about prosecuting any media organisation, be it Wikileaks or the New York Times."

"The US war on whistleblowers must end"

Assange also called for the release of U.S. Army Pfc. Bradley Manning, the alleged source of a WikiLeaks dump who now faces prosecution by the U.S. military.

Julian Assange has appeared from the balcony of the embassy to demand that the U.S. cease its "witch hunt" of WikiLeaks. The Guardian has live coverage.

WikiLeaks founder Julian Assange is expected to make a public appearance today, from the safety of the Ecuadoran embassy in London.

Assange has been holed up in the embassy for the last two months to avoid extradition to Sweden for questioning about sexual misconduct. Assange says he fears persecution from the United States should he be returned to Sweden, and Ecuador agrees, granting him asylum just last week.

Police surround the embassy, as does "a huge scrum of press," and some of Assange's supporters, reports The Telegraph. Embassy workers have been heard testing microphones, and there's a balcony with suspiciously open windows.

Ecuador is willing to shelter Assange for reasons The Nation explains. Foreign Minister Ricardo Patino cited "strong evidence" for protecting Assange from retaliation that "may endanger [his] safety, integrity, and even his life."

But of course, Assange cannot step outside the embassy without being taken into custody. Britain has refused safe passage, as the AP reports, "insisting that it must follow the law and deliver him to Sweden on a binding European arrest warrant."

It's a diplomatic drama that's left a lot of downtime to speculate on possible outcomes – which we've done. Will Britain cut diplomatic ties with Ecuador? Could Assange be smuggled out of the embassy in a crate? We've outlined some options for your perusal as we await his appearance: 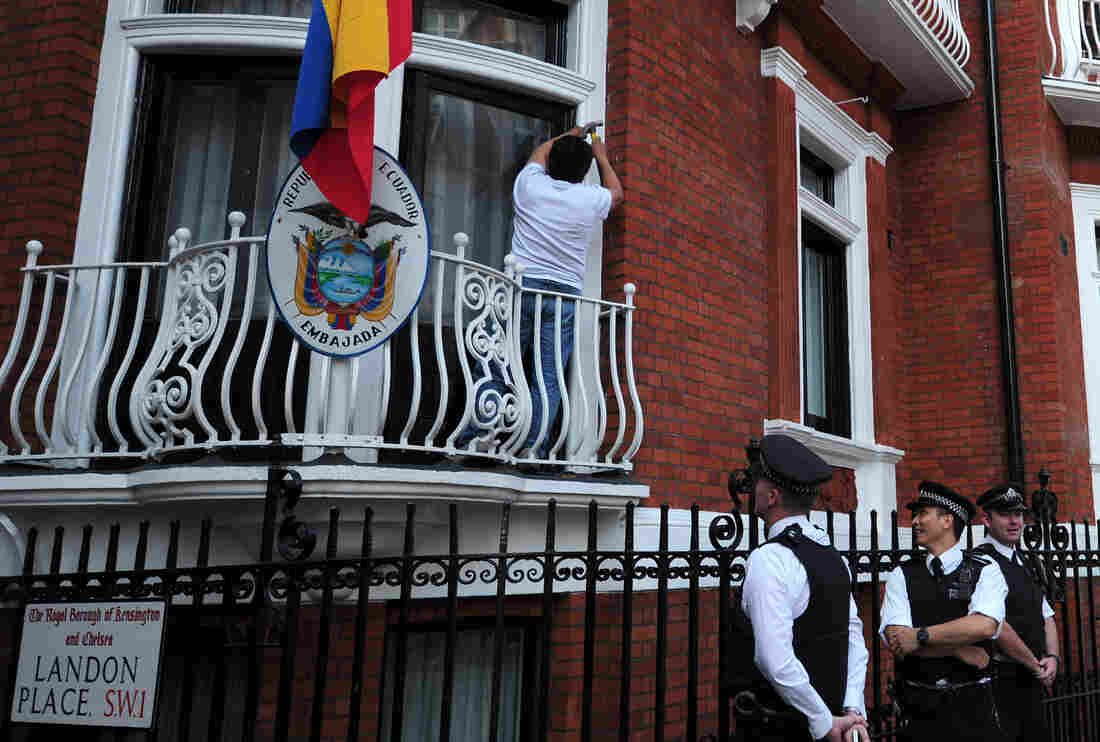 Police stand by near a balcony of the Ecuadorian embassy in London on Sunday. Carl Court/AFP/Getty hide caption 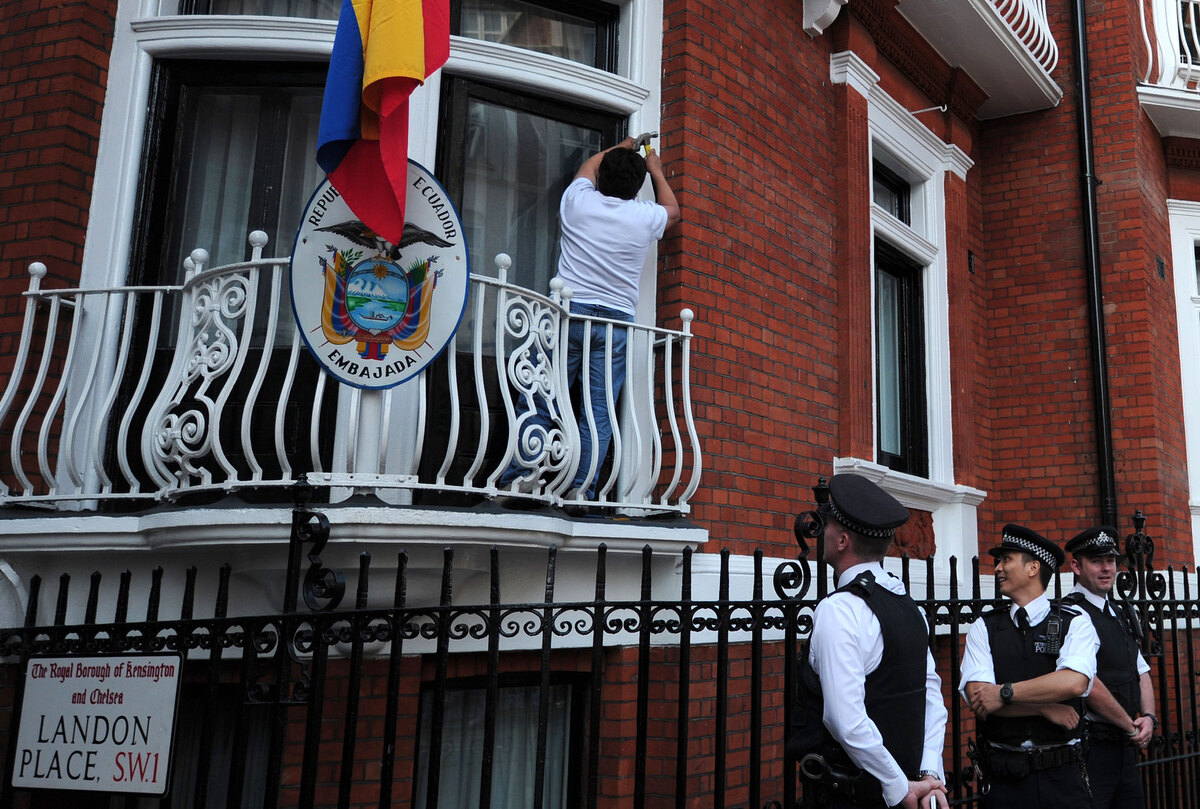 Police stand by near a balcony of the Ecuadorian embassy in London on Sunday.