Accessibility links
Update: Akin Vows Again To Stay In Missouri Senate Race : The Two-Way Under fire for his comments about rape and abortion, the Missouri Senate candidate is under pressure from his own party to drop out before the end of the day. His Democratic opponent is one of the few voices urging him to stay in. 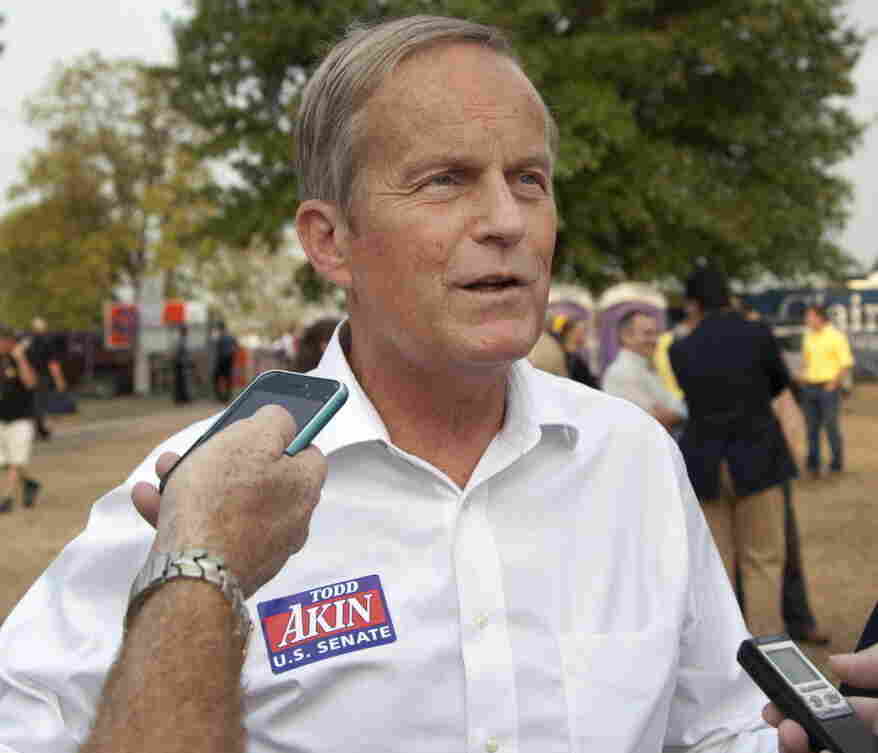 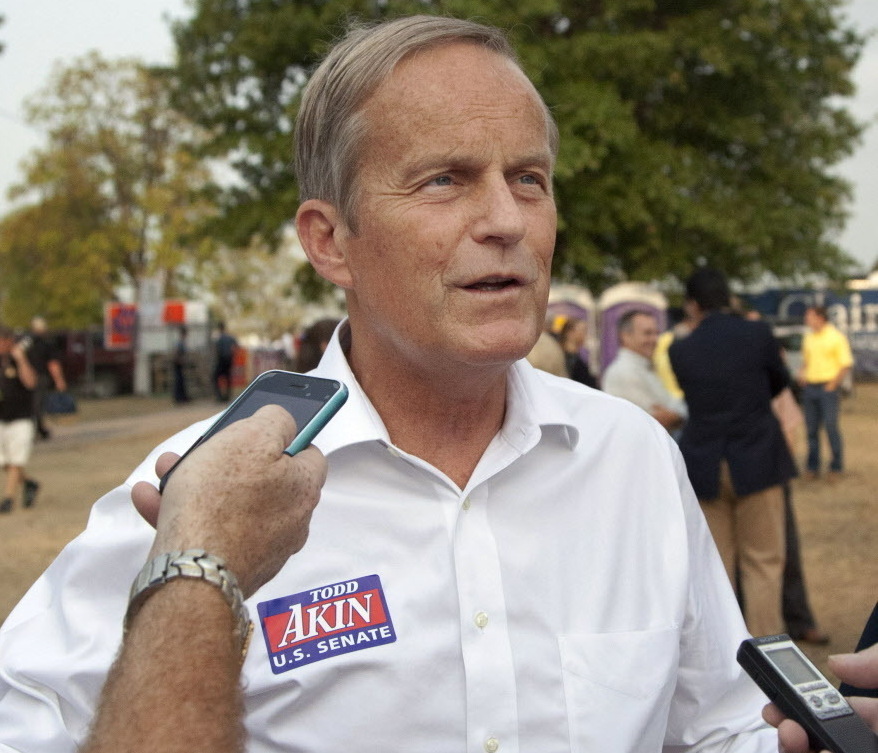 Saying that the positions he and others have taken against abortion will "strengthen our country and it's going to strengthen the Republican Party," Missouri Rep. Todd Akin said just before 1:30 p.m. ET that he will not withdraw from his state's Senate race by a 6 p.m. ET deadline this evening.

"I believe that there is something that we're missing ... something many Americans feel in their heart of hearts believe we should be talking about," he said on the syndicated Mike Huckabee Radio Show. "A respect of life is deeply engrained in our culture. ... Maybe the party needs to include that as part of the party."

Akin added that he doesn't think it's fair that fumbling on one sentence — his much criticized remark that most "legitimate" rapes don't cause pregnancies — should cost him the candidacy.

"Is there a matter of some justice here?" Akin asked. "I misspoke one word in one sentence on one day."

He believes constituents will forgive him. And, he said, there is grassroots support for his positions on abortion.

Mitt Romney, the presumptive Republican presidential nominee and the party's de facto leader, has now made it clear that Akin should withdraw.

Here's what he told reporters, according to Politico:

"As I said yesterday, Todd Akin's comments were offensive and wrong and he should very seriously consider what course would be in the best interest of our country. Today, his fellow Missourians urged him to step aside, and I think he should accept their counsel and exit the Senate race."

It's come to this for Rep. Todd Akin of Missouri:

As more and more of his fellow Republicans call on him to drop out of his race for the Senate before today's 6 p.m. ET deadline to easily get his name off the ballot, the congressman's loudest defender is his Democratic opponent.

"What's startling to me," Sen. Claire McCaskill, D-Mo., said Monday, "is that these [Republican] party big wigs are coming down on him and saying that he needs to kick sand in the face of the Republican primary voters."

As our colleagues at St. Louis Public Radio say, it's "an odd bit of political posturing."

Of course, as Frank James has pointed out over at It's All Politics, part of McCaskill's early campaign strategy appeared to be doing what she could to help Akin become the GOP nominee — because he was arguably the weakest of the Republicans seeking that opportunity. Her campaign ran negative ads against two of the three GOP contenders during that party's primary. Her ads mentioning Akin were less sharp. So she isn't exactly a disinterested party.

In case you're just catching up with the story, Akin caused controversy on Sunday when he said during a TV interview that in cases of "legitimate rape," women rarely get pregnant. The implications — that some women claim rape in order to justify abortions or that there's some sort of difference between "rape" and "forcible rape" — led to condemnations of his remarks by Democrats and Republicans alike. Outside groups and national Republican campaigns have withdrawn their financial support for Akin's campaign.

The congressman has vowed to stay in the race.

But with Missouri election law allowing Akin to simply withdraw by 6 p.m. ET today and then let the GOP choose a new contender, pressure is building on him to get out. He could, as the St. Louis Post-Dispatch explains, wait until Sept. 25 — "but would first need to seek a court order."

On Morning Edition, NPR's Brian Naylor noted that the Missouri race is important to Republicans because party leaders view McCaskill's seat "as one of their best chances for a pick up." There are currently 51 Democrats in the Senate and two independents who caucus with that party.

Meanwhile, CNN's Piers Morgan Tonight had promoted an appearance by Akin on last night's broadcast — only to have the congressman fail to show up. So CNN kept a camera trained on an empty chair. And Morgan said that if Akin didn't come on, "then you are what we would call in Britain a gutless little twerp."

This statement was just sent to reporters by aides to Sen. Roy Blunt, R-Mo.:

" 'We do not believe it serves the national interest for Congressman Todd Akin to stay in this race. The issues at stake are too big, and this election is simply too important. The right decision is to step aside.' "

"I used the wrong words in the wrong way and for that I apologize," he says.

And Akin adds that "the fact is, rape can lead to pregnancy."