Accessibility links
Officials Say West Nile Outbreak Could Be Worst Ever In U.S. : The Two-Way Health officials said this year has already been remarkable, but with cases on the rise, this outbreak could be worst since the virus was first spotted in the U.S. in 1999.

Officials Say West Nile Outbreak Could Be Worst Ever In U.S.

Officials Say West Nile Outbreak Could Be Worst Ever In U.S. 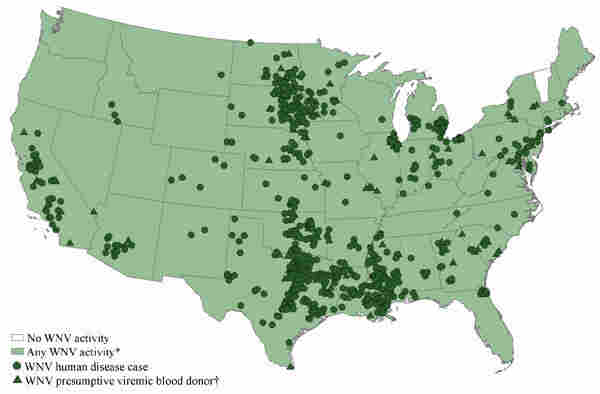 A map that shows where West Nile cases have been reported. Note that areas shaded white have seen no virus activity. CDC hide caption 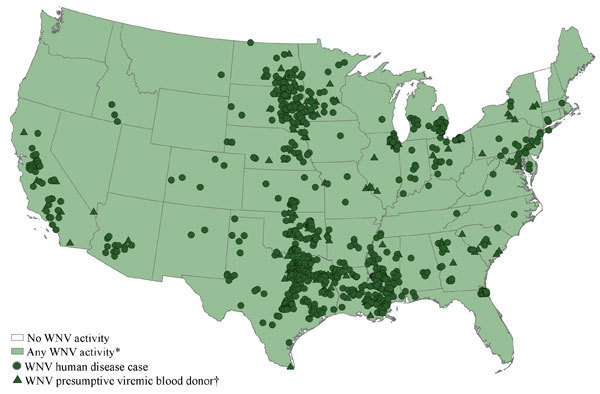 A map that shows where West Nile cases have been reported. Note that areas shaded white have seen no virus activity.

As cases of West Nile virus continue to increase, authorities warned today that this could turn out to be the worst outbreak since the virus first showed up in the United States in 1999.

The New York Times reports that the Centers for Disease Control and Prevention is still unsure about "where and how far" the disease will spread, but so far there have been 1,118 cases and 41 deaths reported.

"Only about one case in 150 becomes serious enough for the patient to need hospitalization – usually when the virus gets into the brain and spinal cord. But 10 percent of those hospitalized die, and other patients are left paralyzed, comatose or with serious mental problems.

The Dallas area has spent about $3 million – virtually all from the federal government – on aerial spraying to kill mosquitoes, the Texas health commissioner, Dr. David Lakey, said in the phone conference. He said that as of noon Wednesday, the state had 25 deaths attributed to the disease that he knew of.

It is not known why this is turning into the worst year since the virus was discovered in New York City in 1999, [Dr. Lyle R. Petersen, director of the CDC's Division of Vector-Borne Infectious Diseases,] said. Experts assume that the early warm spring and very hot summer have played a crucial role.

If you remember, Texas has been the epicenter of the outbreak. As we told you last week, Dallas took the unusual step of spraying insecticide from airplanes in hopes to kill the mosquitos that carry the disease.

The Los Angeles Times reports that West Nile first cropped up in the Eastern U.S. Researchers don't really have any idea why it's cropped up so violently in Texas this summer.

The Times adds that the CDC already has two teams in Texas and "spent $2.5 million to help state health officials fight the outbreak." The state has reported 528 cases and 25 deaths from the disease.

The CDC has put out some information about how to protect yourself from West Nile. The main one: Use insect repellent and get rid of any standing water in your surroundings.