Accessibility links
Lance Armstrong's Seven Tour De France Titles Are Effectively Gone : The Two-Way His decision to no longer contest doping charges means his records should be "obliterated," the head of the World Anti-Doping Agency says. 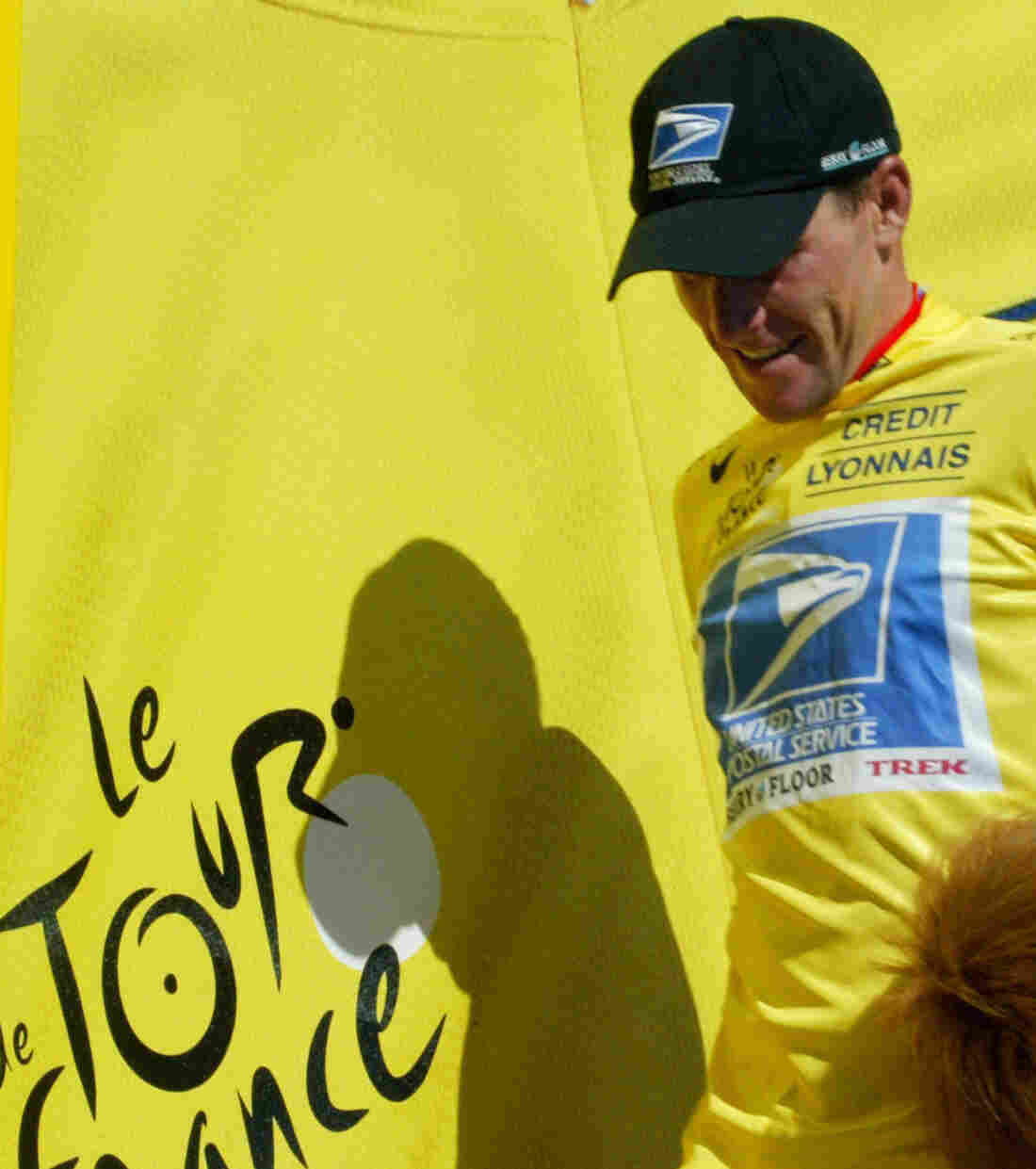 Lance Armstrong, wearing the yellow jersey that identifies the leader in the Tour de France, during the race in 2003. He won that year and six other times. Joel Saget /AFP/Getty Images hide caption 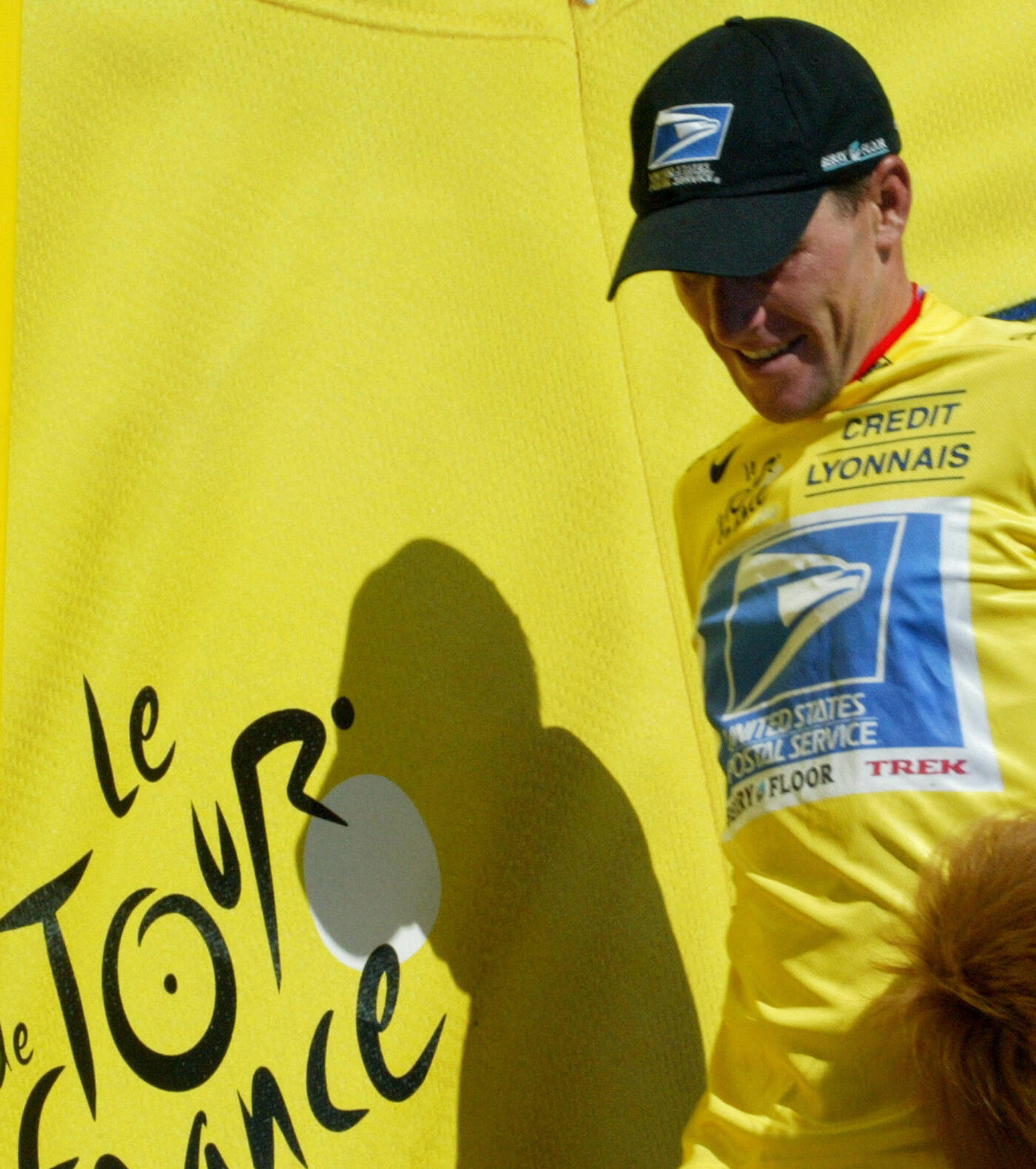 Lance Armstrong, wearing the yellow jersey that identifies the leader in the Tour de France, during the race in 2003. He won that year and six other times.

Cycling superstar and cancer survivor Lance Armstrong's seven Tour de France titles are about to be wiped from the record books.

As NPR's Mike Pesca said early Friday on Morning Edition, while it is the U.S. Anti-Doping Agency that announced Thursday it would strip Armstrong of his titles — including the French records — because of the evidence it says it has collected that he was doping throughout his career, "the USADA is associated with the World Anti-Doping Agency." So the American decision will be honored in France, Mike says.

"Greg LeMond is [now] the only American" to have officially won the world's most prestigious bicycle race, he told Morning Edition host Steve Inskeep. LeMond finished first in three Tours (1986, 1989 and 1990).

The USADA's decision also means Armstrong will likely lose his bronze medal from the 2000 Olympics. And he may be banned for life from competitions. Retired from cycling, the 40-year-old Armstrong has recently been competing professionally in triathlons.

It's important to note that Armstrong, in a statement issued Thursday in which he said he would no longer contest the charges being leveled against him, called the USADA's case a "charade" and a "witch hunt." He also asserted that:

But John Fahey, head of the World Anti-Doping Agency, said today that Armstrong's Tour de France titles now need to be "obliterated" from the record books, the BBC reports.

Armstrong "had the right to rip up those charges but elected not to," said Fahey, according to the BBC. "Therefore the only interpretation in these circumstances is that there was substance in those charges."

Another way to look at Armstrong's statement, Mike said on Morning Edition, is as something of a "no contest" plea.

In a statement on its website, the agency says:

"USADA announced today that Lance Armstrong has chosen not to move forward with the independent arbitration process and as a result has received a lifetime period of ineligibility and disqualification of all competitive results from August 1, 1998 through the present, as the result of his anti-doping rule violations stemming from his involvement in the United States Postal Service (USPS) Cycling Team Doping Conspiracy (USPS Conspiracy)."

And it adds that:

"The anti-doping rule violations for which Mr. Armstrong is being sanctioned are:

"(1) Use and/or attempted use of prohibited substances and/or methods including EPO, blood transfusions, testosterone, corticosteroids and masking agents.

"(3) Trafficking of EPO, testosterone, and corticosteroids.