Accessibility links
Floods, Power Outages In Isaac's Wake : The Two-Way Nearly a third of the homes in Louisiana are without power, even as a downgraded Isaac, now a tropical storm, continued to cause damage.

That tidbit emerged in a letter from gov. Bobby Jindal to President Obama in which he requested expedited major disaster declaration for the state as a result of damage caused by Isaac.

Here's more from the letter:

"Search and rescue missions are underway in multiple coastal parishes while, in other parishes, conditions are still too hazardous to commence rescue efforts. As of 12 PM today, the Louisiana Public Service Commission (PSC) reported over 650,000 power outages, representing over 31% of all utilities in Louisiana. At the current time, the outages are concentrated in Southeast Louisiana where the storm has yet to fully pass. We anticipate further widespread utility interruption as the storm makes its way across the State."

Fifty-eight parishes have issued declarations of emergency; additional parishes are preparing to do the same, the letter said.

Heavy, wind-driven rain from Hurricane Isaac was battering parts of Louisiana today, leaving tens of thousands without power as the slow-moving system crept northwestward, straining levees on its march inland.

But New Orleans has yet to feel the full brunt of Isaac, which came ashore at 7:45 p.m. EDT Tuesday near the mouth of the Mississippi River.

Even so, Isaac, a Category 1 hurricane with 80 mph winds, was already putting an extensive $14.5 billion post-Katrina upgrade to New Orleans' levee system to the test exactly seven years after the 2005 hurricane hit the city, causing widespread devastation. 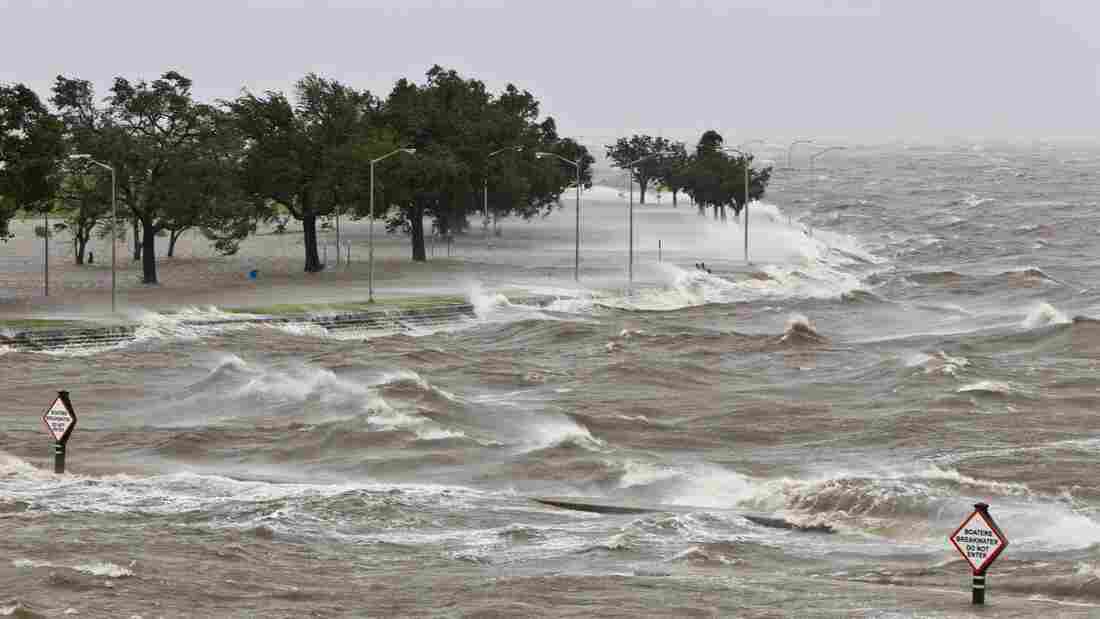 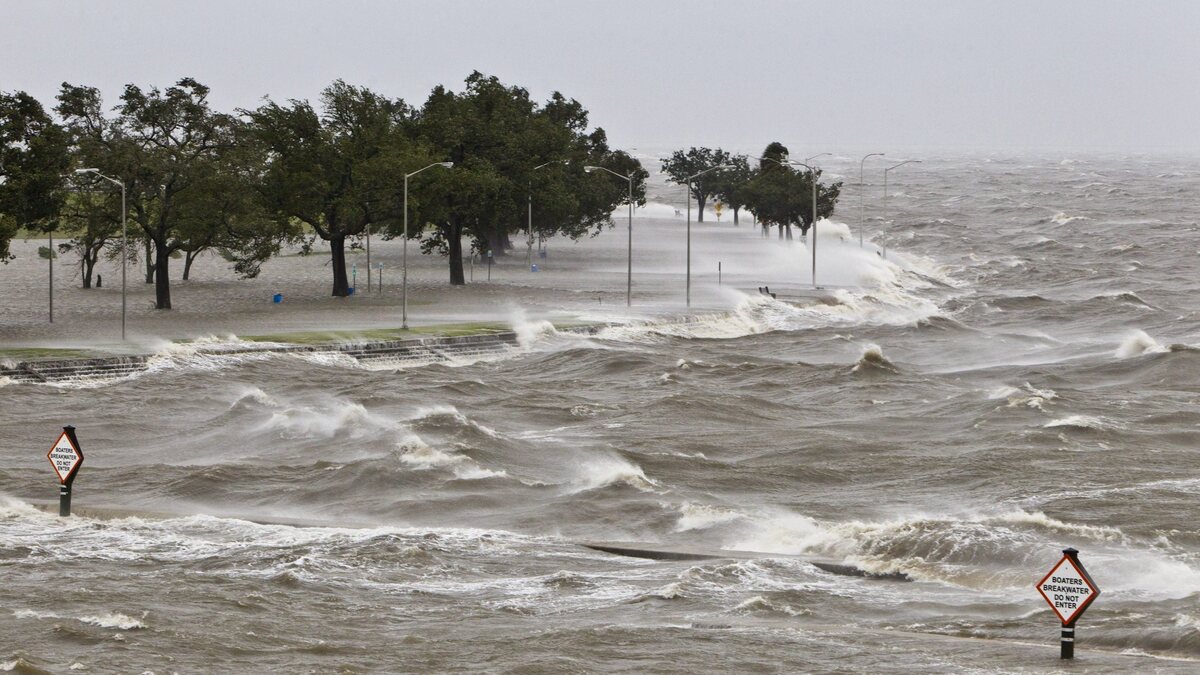 A storm surge causes tides to quickly rise while rough waves pound the concrete seawall along the shores of Lake Pontchartrain. Hurricane Isaac made landfall along the Gulf Coast and now threatens New Orleans.

Torrential rain — amounting to as much as 20 inches in some areas — was expected to linger for hours over parts of New Orleans. Already, the National Weather Service reported "significant flooding from overtopping of levees in the East Bank portion of Plaquemines [Parish]." The parish is on the southernmost tip of Louisiana.

The Associated Press quotes Parish spokesman Caitlin Campbell as saying water has breached an 18-mile stretch of the levee and that some homes are flooded, but that streets in the area were still passable.

NPR's Christopher Joyce, reporting from New Orleans, says that while flooding has occurred in Plaquemines, the levees there and elsewhere are holding so far. He says some residents in the area are being evacuated.

Ryan Bernie, a spokesman for the city of New Orleans, said the storm had caused only some minor street flooding before dawn and felled trees but had left roughly 125,000 customers in the city without power, according to the AP.

In total, The Times-Picayune reports some 250,000 residential and commercial customers in Louisiana were without electricity as of 11 p.m. Tuesday. NPR's Russell Lewis says "transformers are exploding like popcorn, sending bright flashes of light into the sky."

(Power outages can be tracked here.)

A spokeswoman for the American Red Cross, Jill Bode, says volunteers with supplies are already providing help throughout the storm-affected regions.

"We're up to almost 2,500 people now that are either responding to situations in Florida, working in shelters throughout Texas and the rest of the Gulf area, or are on standby to start doing damage assessment," Bode said.

Tens of thousands of Louisiana and Mississippi residents living in low-lying areas were advised to leave their homes, but many of them chose to stay and ride out the storm, despite memories of Katrina's devastation and appalling death toll. Among those who were taken out of the storm's path were 700 patients of Louisiana nursing homes.

The National Weather Service says the storm is moving agonizingly slow at just 8 mph, giving it plenty of time to pummel and saturate affected areas. The center of the system is still approximately 60 miles southwest of New Orleans.

According to the NWS, "A general northwest motion at a slower forward speed is expected today and tonight ... followed by a turn toward the north-northwest by Thursday night or early Friday."

That will put the center of a likely weakened Isaac over southern Arkansas by early Friday.

Isaac's maximum sustained winds have slowed to 60 mph as the tropical storm is grinding its way northwest at 5 mph, the National Hurricane Center says in its latest update.

The center says the center of Isaac will move farther inland over Louisiana on Wednesday night and Thursday, and over southern Arkansas by early Friday.

"Steady weakening is expected during the next 48 hours as Isaac continues to move farther inland," it said. "And Isaacis forecast to become a tropical depression by Thursday night." Life-threatening hazards from storm surge and inland flooding still persist in Mississippi and southeastern Louisiana, south-central Louisiana, Alabama and the Florida panhandle and Apalachee Bay, the center said.

In other news, The Associated Press says an18-mile levee in southeast Louisiana's Plaquemines Parish will be breached to relieve pressure as soon as equipment can be brought to the site. The levee is outside the federal system, and has been hit by heavy flooding.

Heavy rains and winds continue to pose a threat in the area affected by Isaac, which is now a tropical storm.

Here are the development since our last update:

-- In a statement, FEMA chief Craig Fugate said a "number of areas both along the coast and inland that can be affected by strong winds, storm surge and inland flooding and tornadoes."

-- The storm continued to affect offshore oil rigs and platforms along the Gulf Coast, according to IHS, a consulting firm.

"According to statistics reported today by the U.S. Bureau of Safety and Environmental Enforcement (BSEE), more than 1.3 million barrels of oil production are now shut-in in U.S. federal waters, and more than 3.2 billion cubic feet of gas-per-day in federal waters, has been shut-in due to Tropical Storm Isaac," IHS said in a statement.

-- In its most recent advisory, the National Hurricane Center says Isaac, now a tropical storm, has maintained the maximum winds of 70 mph that were recorded at 3 p.m. The center says that "life-threatening hazards from storm surge and inland flooding" are still a real danger in southeastern Louisiana, where water levels could reach from 6 to 12 feet above ground, depending on whether the surge hits along with high tide.

The storm is currently about 35 miles south of Baton Rouge and is creeping northwest at 6 mph. It is predicted to maintain that direction tonight, and to shift to a slightly more northerly path sometime overnight or early Friday.

-- So far, it looks like Plaquemines Parish southeast of New Orleans has been one of the hardest hit areas.

-- Louisiana Gov. Bobby Jindal says 56 parishes have declared state of emergencies and the National Guard is helping to rescue people in Plaquemines Parish from attics and roofs using boats and high-water vehicles.

Jindal said during a press conference that the levee in Braithwaite may be intentionally breached to let some of the water out. The east side of the the parish was ordered evacuated. Some 3,000 people were still there.

-- FEMA Administrator Craig Fugate told Morning Edition that rescues and recovery will be delayed by the slow movement of the storm.

"It's going to be a slow response until its safe to get out and move about," he said.

-- The levee system, which underwent a $14 billion overhaul after Katrina, is performing as it should, the Army Corps of Engineers told the AP.

"We don't see any issues with the hurricane system at this point," Corps spokeswoman Rachel Rodi told the AP.

-- In the Mississippi Gulf coast, some flooding has been reported and power outages are starting to spread.

Rain is still falling, so there is still potential danger ahead, but so far New Orleans has escaped serious damage.

"New Orleans so far appears to have avoided major damage, but the city is littered with fallen trees and downed power lines, and few traffic lights are working. Some streets were under several feet of water as rain continued to fall. More than 600,000 residents of Louisiana were without power, nearly a third of them in New Orleans.

The longer the storm lingers, the more pressure it is putting on the levees and other flood-protection systems along the coast.

"Rain and lots of it, unfortunately."

That's what FEMA Administrator Craig Fugate told Morning Edition when asked what he was seeing in Mississippi and Louisiana today. Fugate said water will be the big issue here.

The coastal communities have already seen flooding from the storm surge and that will only be made worst because the storm is moving so slowly and will continue to dump rain.

That slow movement will also hamper rescue and recovery efforts.

"It's going to be a slow response until it's safe to get out and move about," he said.

But Fugate said that FEMA is prepared to mobilize as soon as the weather clears.

"'The system is performing as intended, as we expected; we don't see any issues with the hurricane system at this point," said Army Corps of Engineers spokeswoman Rachel Rodi.

Amy Jeffries of member station WRKF in Baton Rouge says rain is just starting to fall in the city, with winds gusting to 50 mph.

Some 20,000 people are already without power in the state capital, she reports.