Accessibility links
'Queen Of Cocaine' Is Gunned Down In Colombia : The Two-Way Griselda Blanco was infamous for building the drug trafficking network between Medellin and the U.S. in the '70s and for ordering the deaths of dozens. She served almost 20 years in a U.S. prison. Monday, the 69-year-old "black widow' was assassinated.

Talk about your just deserts:

"A Colombian drug trafficker, known as the 'queen of cocaine,' has been killed in the city of Medellin," the BBC writes. "Griselda Blanco, 69, was shot dead by gunmen as she was leaving a butcher's."

That rather dry report doesn't do justice to the life and death of Blanco, though. As Miami New Times writes, her assassination on Monday:

"Was a bloody cinematic ending for the 69-year-old retired cocaine trafficker who was insatiably fond of the gangster epic The Godfather — going as far as naming her youngest son Michael Corleone."

And New Times adds that:

-- "Blanco is the reputed originator of motorcycle assassinations" in Colombia.

-- "According to law enforcement, she oversaw a billion-dollar criminal organization that transported 3,400 pounds of perico a month into the United States. She revolutionized smuggling by developing her own line of underwear with secret compartments to stuff drugs into."

-- She was "accused of masterminding at least 40 homicides from Miami to New York, including the murder of a two-year-old boy" who was killed when gunmen missed their intended target.

Colombia's El Tiempo says that Blanco mentored legendary trafficker Pablo Escobar and earned another nickname — "Black widow" — because she killed her husband (who was also her partner in the illegal drug trade) in 1975. 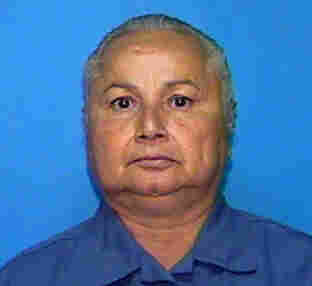 Griselda Blanco, the "queen of cocaine," in a 2004 photo posted by the Florida Department of Corrections. Fla. Dept. of Corrections hide caption

The Miami Herald, which says Blanco was also known as the "godmother of cocaine," reminds its readers that she might have been sent to Florida's death row after her 1985 arrest and conviction on three murder charges. But, the prosecution's case for capital punishment was damaged when it came out that three secretaries from the Miami-Dade State Attorney's Office had engaged in phone sex with a key witness: "Jorge Ayala, the charismatic hitman who later testified against Blanco."

Instead of the death penalty, Blanco was sentenced to 20 years in prison. She was released in 2004 and deported to Colombia.\

Because there's been a discussion in the comments thread about whether we misspelled "deserts," here's a note we just added there:

Actually, "just deserts" (with one 's' in the middle) is correct — something we here at The Two-Way had to double- and triple-check ourselves. As The Guardian explains, it derives from "deserve" and is commonly misspelled:

We learned something today!