Accessibility links
Armless Archer Matt Stutzman Describes How He Shoots A Bow — And Wins Medals : The Two-Way American Paralympian Matt Stutzman won the silver medal in archery this week, a feat he accomplished despite being born without arms. In the men's compound open final, he was narrowly beaten by Finland's Jere Forsberg, who has the use of both arms. 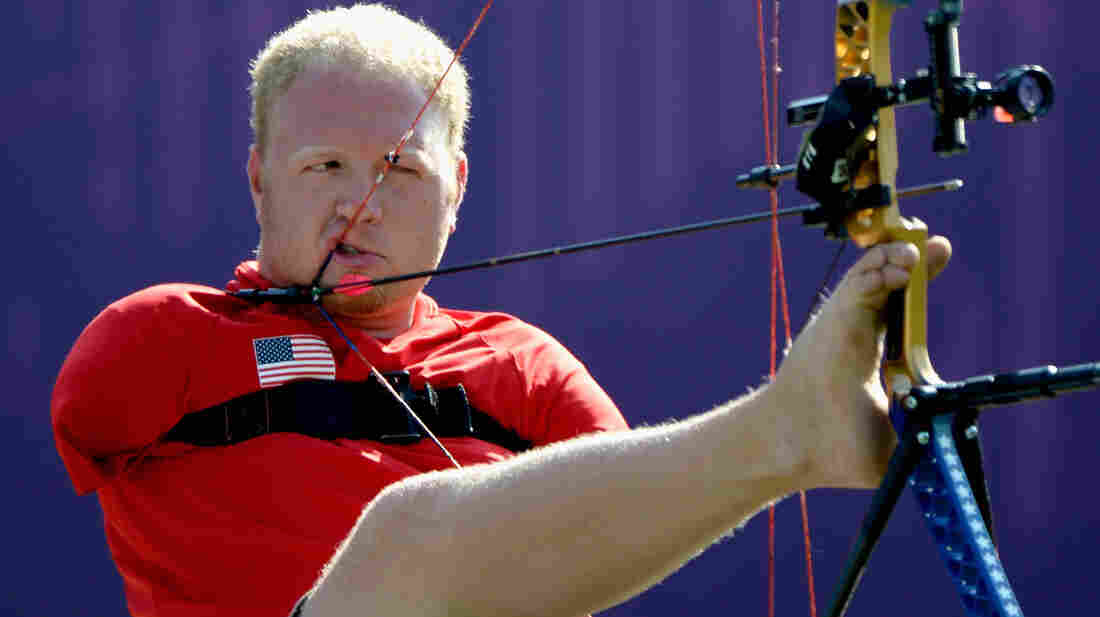 Archer Matt Stutzman of the U.S. prepares to shoot in the London Paralympics. Born without arms, Stutzman uses a release trigger strapped to his shoulder to fire. Dennis Grombkowski/Getty Images hide caption 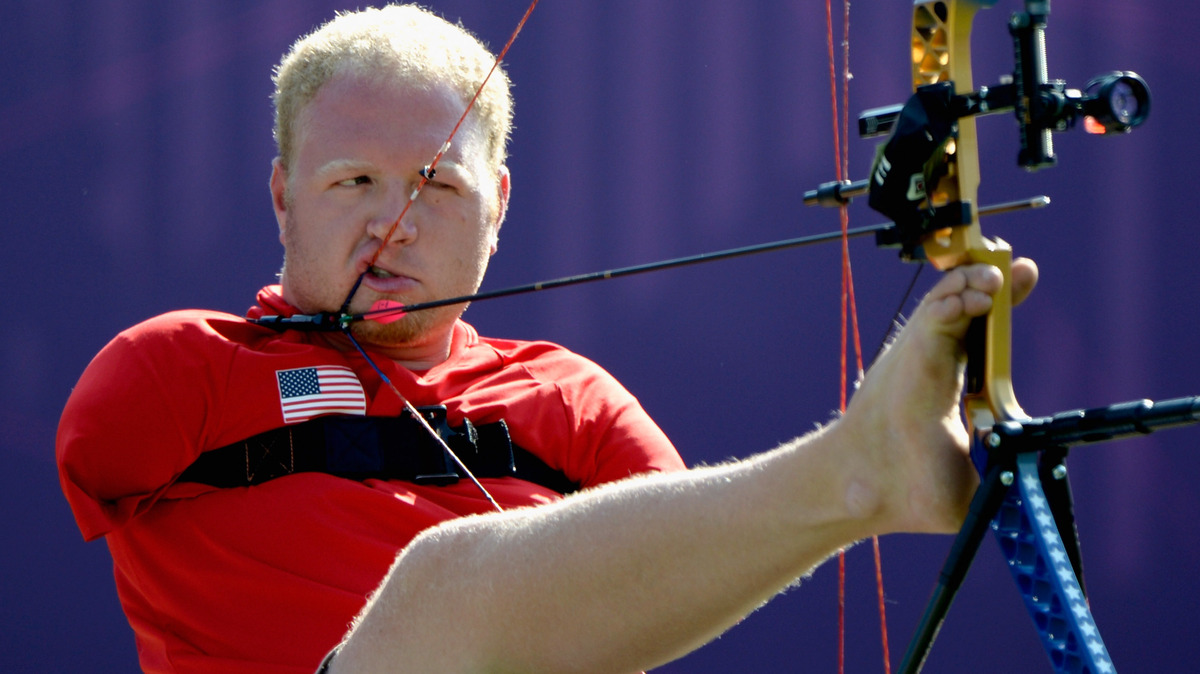 Archer Matt Stutzman of the U.S. prepares to shoot in the London Paralympics. Born without arms, Stutzman uses a release trigger strapped to his shoulder to fire.

American Paralympian Matt Stutzman won the silver medal in archery this week, a feat he accomplished despite being born without arms. In the men's compound open final, he was narrowly beaten by Finland's Jere Forsberg, who has the use of both arms.

In the gold medal match, Forsberg fired a perfect 10 on his final arrow to avoid a shoot-off with Stutzman.

The Paralympics have helped Stutzman, who is from Fairfield, Iowa, become something of a celebrity, thanks to his competitive spirit and his refusal to let his talents go to waste.

And despite many reports to the contrary, Stutzman tells All Things Considered co-host Melissa Block, "I actually don't use my teeth at all." Instead, he uses his mouth only to guide the release onto the string.

Like many of his wheelchair-using rivals, Stutzman shoots from a seated position. He uses his left foot to put the arrow in place, then he pushes the compound bow away with his right foot and pulls the arrow back with a release aid that's strapped to his body.

"There is a gentleman on the team, he actually bites onto the bow string and pulls back with his teeth to shoot the bow," Stutzman says. "And I like my teeth a lot. So that's why I came up with the idea of using a release."

Here's how he describes the process, after picking up an arrow with his left foot and putting it on the bow's string:

"After I get the arrow onto the string, I kind of cross my legs, almost 'gentleman-style,' as you can say it," Stutzman tells Melissa. "And what that allow me to do is, it brings the string close enough that I can actually kind of bend down, and hook my release aid, which is on my right shoulder, onto the string."

The release is on a belt that wraps around his body and over his shoulder. Stutzman says the belt was modified from a tree stand that a hunter would use. The release aid, which is one any other archer might use, has a trigger that rests against his jaw.

"Once I get anchored, and I'm looking down the sights... when I'm ready to fire, I just kind of move my jaw slightly backwards," he says. "The release is set really light, it's almost like the pressure it takes you to click on a mouse."

Still, that doesn't mean it's an easy process. "When I push that away from my chest, that's 60 pounds," he says. "That's a lot of weight."

This is the first Paralympics for Stutzman, whose unique shooting style — and skill — gave him something of an air of hype as he traveled to London. He is also the Guinness World Record-holder for the longest accurate shot, a mark of 230 yards that he set in 2011.

In London, Stutzman wasted no time in living up to expectations, as he dominated the qualifying round to finish first by 12 points. And he says he was excited to compete in the tournament.

After winning his silver medal, Stutzman said that he "loved" his highly competitive match against Forsberg. And he told reporters he hoped his performance might inspire others.

"If I can inspire just one person then my job's done. Really, watching me people can only say, 'I haven't got an excuse. I can't say my back's hurting or I got a sore finger, this guy's shooting arrows with no arms,'" Stutzman said in The Telegraph. "I kinda hope I make everyone realize you can do whatever you want in this life if you just try."

Stutzman says that he wanted to try archery after seeing his father and brother going out hunting with their bows. It didn't seem fair to him that he was left out. So he made a deal with his father.

"I did odd jobs around the farm to pay for that bow," Stutzman says. And once he got it, there was just one more hurdle: figuring out how to shoot it with his feet.

"If you Google 'how to teach a guy without arms how to shoot,' you will not find that," Stutzman says. "I mean, you can find anything on Google. But you just can't find that.

"That's the one thing on Google that does not exist?" Melissa asks.

"That's right," Stutzman says — before adding, "Well, it does now."