Accessibility links
States' Rights And DOMA Clash On A Shifting Battlefield : The Two-Way The debate over states' rights versus federal power is as old as our country, but this time the subject of controversy is relatively new. As Americans' views on homosexuality change, more states are stepping up to challenge the federal definition of marriage.

States' Rights And DOMA Clash On A Shifting Battlefield

States' Rights And DOMA Clash On A Shifting Battlefield 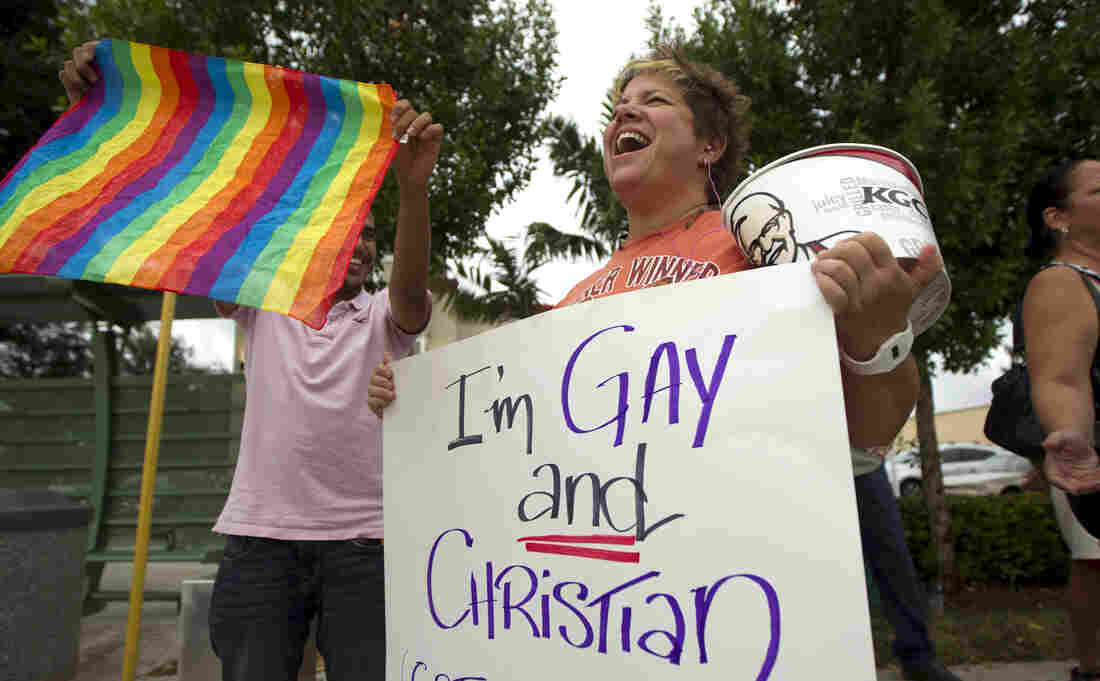 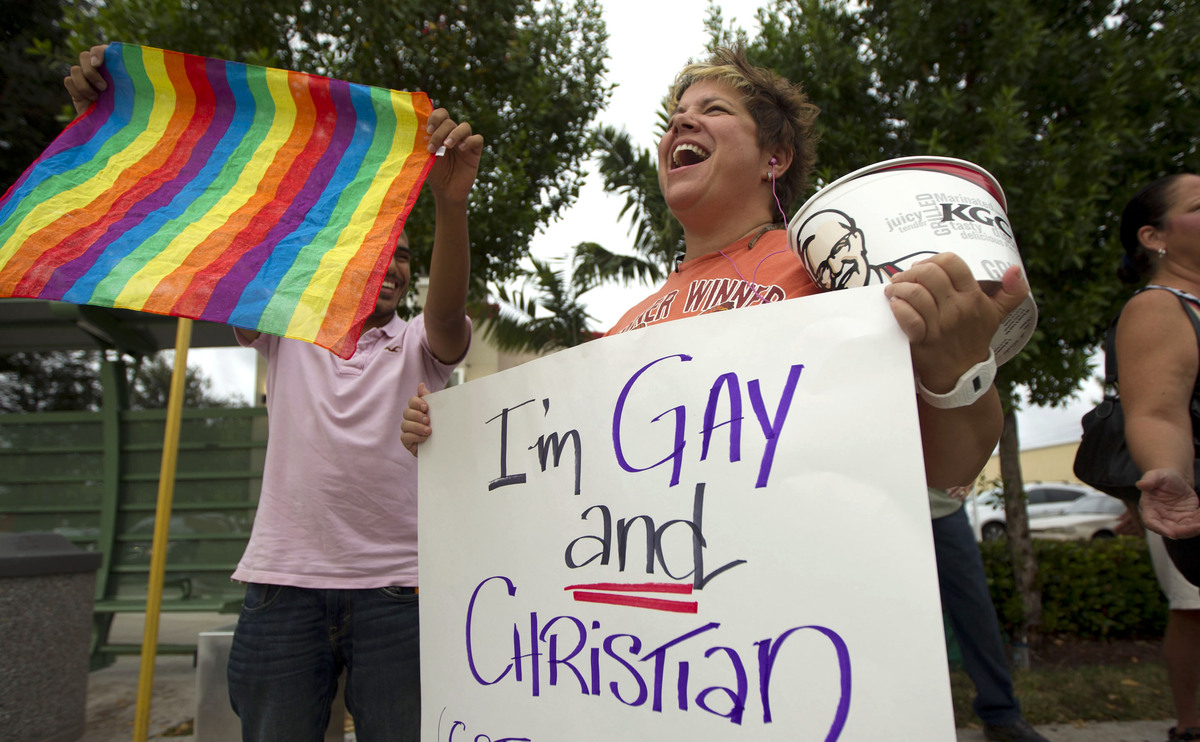 Carri Jo Anderson joins the protest in front of a Chick-fil-A restaurant in Pompano Beach, Fla., in August. As views on homosexuality change, more states are challenging the federal definition of marriage

The debate over states' rights versus federal power is as old as our country. The latest brush-up comes in a doubly-sticky challenge to the federal Defense of Marriage Act, or DOMA, which defines marriage as being between one man and one woman.

Three states now contend that DOMA is a violation of states' rights for the federal government to not recognize same-sex couples who were legally married under state law. Vermont, Connecticut and New York all allow gay couples to marry. They contend that the federal government does not have constitutional authority to regulate marriage and family relationships at any level.

The states are voicing their opinions over a particular case of the federal government's demand for $350,000 in estate taxes when Edie Windsor's partner died. Had Windsor been married to a man, the IRS would have allowed her partner to transfer assets to Windsor under the marital tax deduction. By not recognizing the legal status of Windsor and her partner, the feds are essentially reversing a marriage that is legal under New York law. In other words, the states argue, the feds "unmarried" Windsor and her partner.

The conflict is just the latest challenge to DOMA, at which several federal and state judges have been chipping away. As an article in The Christian Science Monitor explains, the most recent chip came earlier this year from the First Circuit Court of Appeals in Boston. It called DOMA discriminatory regarding partner benefits because it "fails the test" when considering its inequitable impact on minority interests.

Gay rights activists around the nation are challenging state bans on same-sex marriage — in state courts and through the legislature. Here, a look at how the legal battle is playing out, state by state.

That same article explains how even the law's originators have come to realize that the federalism provisions they put in DOMA haven't worked to prevent legalization of gay marriage on the state level, as it was intended to do.

The question over whether the federal government can use DOMA to ignore a state-recognized same-sex marriage is bound to face further tests as more states look to legalize gay marriage. This November, Maryland, Maine and Washington are putting the question to voters. Minnesotans are voting on an anti-gay marriage constitutional amendment that would define marriage as being between a man and a woman.

Just this week, Minnesota Vikings punter Chris Kluwe published an impassioned letter to a Maryland state delegate who demanded that the Ravens' owner not permit his players to talk about the issue of same-sex marriage. You can read more about why Kluwe wrote the letter in this New York Times article. Aside from invoking the First Amendment, Kluwe also goaded the lawmaker for being against gay marriage in the first place:

"I can assure you that gay people getting married will have zero effect on your life. They won't come into your house and steal your children. They won't magically turn you into a lustful c***monster. They won't even overthrow the government in an orgy of hedonistic debauchery because all of a sudden they have the same legal rights as the other 90 percent of our population — rights like Social Security benefits, child care tax credits, Family and Medical Leave to take care of loved ones, and COBRA healthcare for spouses and children. You know what having these rights will make gays? Full-fledged American citizens just like everyone else, with the freedom to pursue happiness and all that entails. Do the civil-rights struggles of the past 200 years mean absolutely nothing to you?"

As you can see, Kluwe's letter makes reference to some of the federal programs that come into conflict when states permit gay marriage.

The New York case is pending in the Second Circuit Court of Appeals, but as more states consider same-sex marriage laws — and as more people see gay marriage as a basic right — DOMA's constitutionality may need to be settled in the Supreme Court.