Accessibility links
Welcome To The New Middle East? : The Two-Way The violent protests at U.S. embassies this week seemed to catch the new Middle East governments flat-footed. So are these attacks an aberration on the rocky road of nation building, or a harbinger of a region moving toward greater chaos? 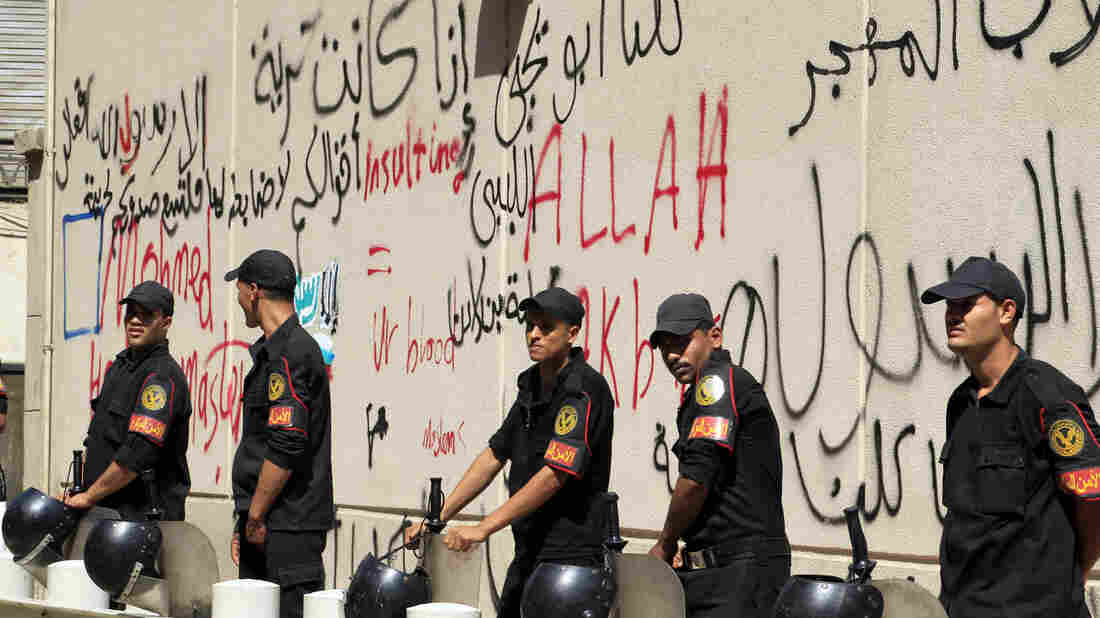 Security guards were deployed outside the graffiti-covered walls of the U.S. Embassy in Cairo, Egypt, which came under attack Tuesday. Mohamed Abd El Ghany/Reuters/Landov hide caption 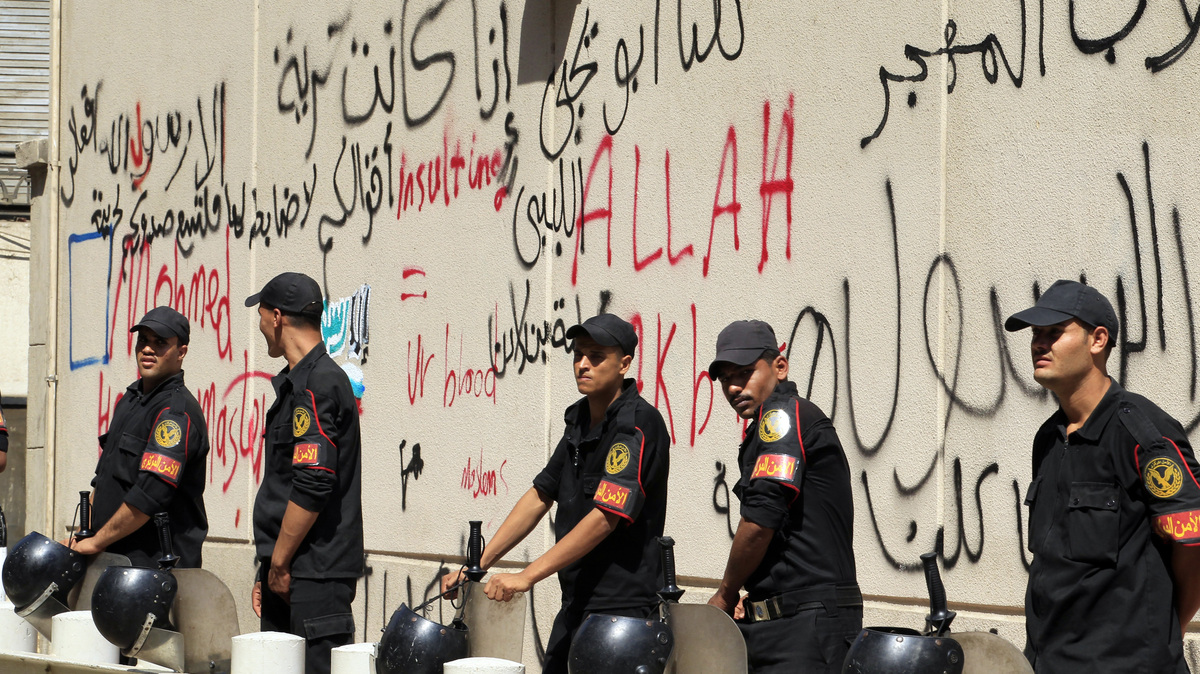 Security guards were deployed outside the graffiti-covered walls of the U.S. Embassy in Cairo, Egypt, which came under attack Tuesday.

The three attacks on U.S. diplomatic missions this week have a common theme: all took place in countries where autocratic rulers were ousted last year and where new governments are still struggling to keep order.

Last year, many Americans were cheering on Arab Spring uprisings in Egypt, Libya and Yemen. Now the U.S. is the focus of violent anger over an anti-Islamic film produced in this country.

Protests at U.S. embassies and consulates are nothing new. At some diplomatic missions, they're semi-permanent features. What's changed is the inability of nascent Arab governments to maintain control of their more radical elements.

In the old Middle East, leaders like Egypt's Hosni Mubarak would tolerate or even orchestrate protests against the United States and other familiar targets such as Israel.

Arab leaders saw this as a way for disgruntled citizens to blow off steam and direct grievances at a foreign power rather than dwelling on shortcomings at home. But the security forces were always monitoring, and the demonstrations rarely, if ever, got out of hand.

This week, Arab governments seemed to be caught by surprise.

'How Could This Happen?'

The most serious assault was in Libya, which has been seen as one of the most pro-U.S. countries in the region.

Many Libyans are grateful that the U.S. and NATO air campaign helped Libyans overthrow Moammar Gadhafi. And Chris Stevens, the U.S. ambassador killed Tuesday night at the consulate in Benghazi, played a singular role in helping the rebels become Libya's new leaders.

Stevens was in Benghazi last year during the uprising, working closely with the opposition fighters and serving as a crucial conduit between them and the U.S. government.

And yet the attack on the American consulate, which involved rocket-propelled grenade fire, was a tragic example of the dangerous armed groups still at large.

Libya's president has apologized, but the damage has been done. Stevens went to Benghazi to expand the U.S. presence there. Now the U.S. has withdrawn diplomats from the city and scaled back its staff in the capital Tripoli.

In a new report, the International Crisis Group sums up the contradictory nature of the new Libya:

Libya can be seen as "one of the more encouraging Arab uprisings, recovering faster than expected; or as a country of regions and localities pulling in different directions, beset by inter-communal strife and where well-armed groups freely roam. Evidence exists for both: successful elections on one hand, violent attacks on the other."

So are these attacks an aberration on the rocky road of nation building, or a harbinger of a region moving toward greater chaos?

So far, most of the foreign policy community seems to be arguing that it's too early for the U.S. to retreat from countries undergoing turbulent transitions.

"The White House must redouble its commitment to the Arab Spring," says Shadi Hamid, a Middle East analyst writing at ForeignPolicy.com. "Across the region, Salafist extremists and other unsavory characters are trying to fill the power vacuum left by a weak and confused international community. Americans, now more than ever, need to hear a clear narrative of why Arab democrats need our support in their struggle against radicals."

Yet it's also clear that Islamist groups, including radicals and extremists, have much more space to operate with the old autocrats gone. Popular Islamist groups have won elections in Egypt and Tunisia and appear poised to do well in other countries.

Mohammed Morsi, Egypt's first elected president, comes from the Muslim Brotherhood, the Islamic group that operated under a web of restrictions throughout Mubarak's 30-year rule.

Morsi was slow to respond to the attack on the U.S. Embassy, and his initial concerns focused on the insults to the Prophet Muhammad in the U.S.-made film, The Innocence of Muslims, which sparked the outrage.

Robert Danin of the Council on Foreign Relations noted that Libya's leaders have "said all the right things. They have apologized, they have expressed their outrage, and come out clearly and condemned what happened."

In contrast, Danin says, Egypt's Muslim Brotherhood, which leads the government, "has been frighteningly quiet."

As countries throughout the region work their way through transitions, Danin tells the Council on Foreign Relations, more turmoil seems likely.