Accessibility links
Anti-Japan Protests Erupt In China Over Disputed Islands : The Two-Way A controversy that has lasted decades boiled over this past week, spilling into China's streets Saturday. Thousands demonstrated in one of the biggest protests in Beijing in recent years. 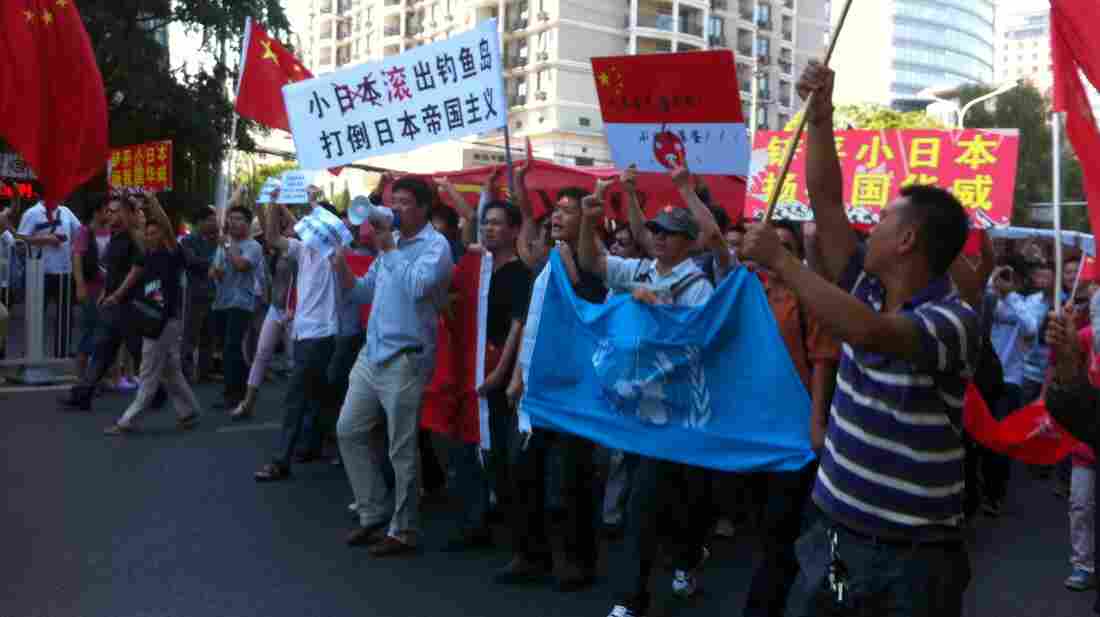 Protesters march outside the Japanese Embassy in Beijing on Saturday. Tension escalated, sometimes to violence, in cities across China after Japan bought the disputed islands from a private Japanese owner. Louisa Lim/NPR hide caption 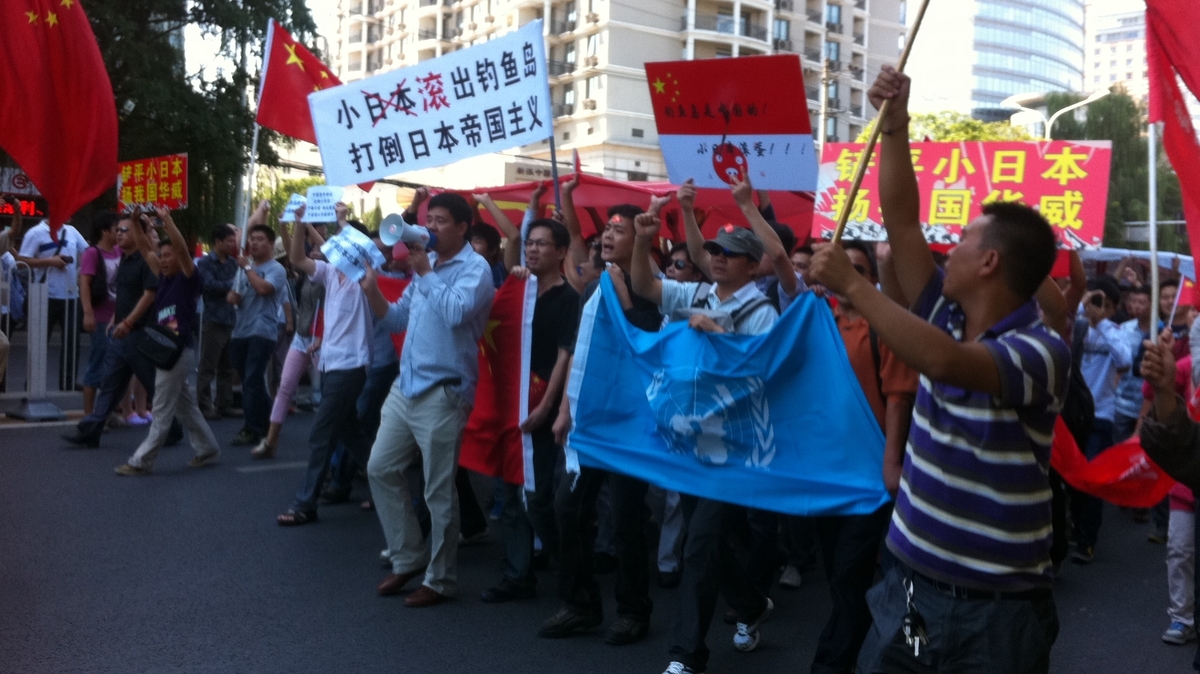 Protesters march outside the Japanese Embassy in Beijing on Saturday. Tension escalated, sometimes to violence, in cities across China after Japan bought the disputed islands from a private Japanese owner.

It has been a day of rage on China's streets. The road outside the Japanese Embassy in Beijing was transformed into a sea of protesters, waving national flags, screaming invective.

In one of the biggest protests seen in Beijing in recent years, thousands were demonstrating against Japan's purchase of the disputed islands, known as Diaoyu in China and Senkaku in Japan. We reported on the tensions over the past week and did a primer on the decades-long controversy.

In a country where large-scale protests are usually suppressed, the fact that Saturday's demonstrations were allowed was taken as a sign of the government's stance.

His next words underline both the volatility of the demonstrators and the difficulty Beijing faces in controlling the mood. He described his degree course as being in auto manufacturing, quickly adding, "I want to learn to make tanks, in order to exterminate the Japanese."

Indeed, at times, the Beijing protest grew violent, with hundreds trying to storm metal police barricades, and others throwing rocks and bottles at the embassy.

They chanted slogans calling for a boycott of Japanese goods, and some even called for China to declare war on Japan. Other protests were seen across the country, with pictures on Chinese Twitter, Sina Weibo, showing scenes in 20 other cities.

Online reports say protesters smashed a police car made by the Japanese company, Mitsubishi, in the southern city of Changsha. Such demonstrations of people power put pressure on China's government to take a harder line on Japan.

Large numbers of police, both regular and paramilitary, were deployed around the Japanese Embassy, monitoring the situation. Helicopters flew overhead constantly, an unusual sight in Beijing.

The Associated Press reports that about 200 police officers cordoned off streets in Shanghai that led to the Japanese Consulate, "allowing protesters in groups of 100 to approach the building. Demonstrators had to first register with police."

But there are fears of the situation getting out of hand, and the U.S. Embassy has warned American citizens to stay away from the protests. There have not yet been any reports of arrests, though such reports are seldom publicized.

Such demonstrations of people power put pressure on China's government to take a harder line on Japan.

Japan's wartime history is never far away either. One protester carried a small sign saying, "Never forget the Nanjing massacre. Apologize to China."

When asked why she'd come out today, an elderly woman surnamed Long talked about the murder of members of her family by Japanese forces in 1938. 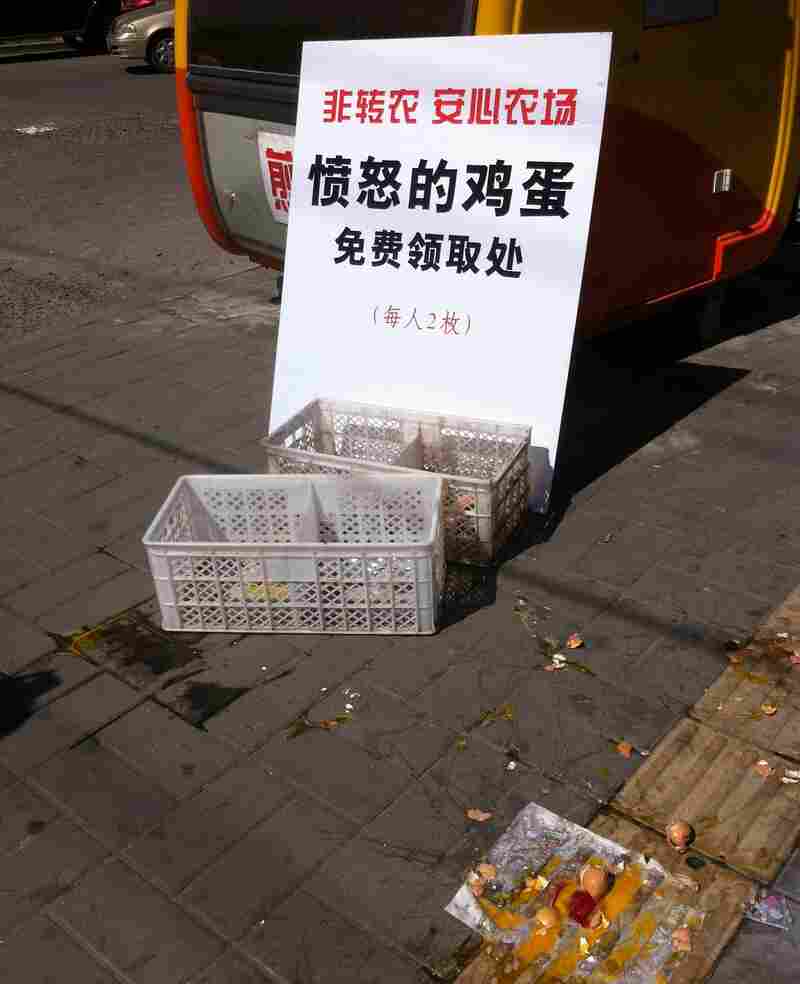 Cartons of "free rage eggs" were given to protesters to throw at the Japanese Embassy in Beijing. Louisa Lim/NPR hide caption

By Friday, there had already been at least six reports of Japanese citizens being attacked or harassed, including one who was spattered with hot ramen noodles, as The Wall Street Journal reported.

In the city of Chengdu, a 7-Eleven convenience store and a Family Mart were raided by protesters who believed they were Japanese-owned, the blog Ministry of Tofu says. Friday night, Japanese restaurants were already putting up Chinese flags in order to avoid becoming the target of attack. One supermarket in Fujian even organized its toothpaste display to look like a tank, mounted with a slogan saying, "The Diaoyu Islands are Chinese!" The Ministry of Tofu has photos of the stores from Sina Weibo and another Chinese news site.

Close to the demonstration in Beijing on Saturday, cartons of "free rage eggs" were being given out for protesters to throw at the embassy. On the ground beside them lay a Japanese flag, bespattered by broken eggs. Such anger, once unleashed, could prove difficult to contain.