Accessibility links
China Ratchets Up The Rhetoric In Island Spat With Japan : The Two-Way China's state-run media warns of trade retaliation against Japan, following a weekend of anti-Japanese protests across China over Japan's purchase of disputed islands in the East China Sea. As the economic cost of these protests begins to escalate, NPR correspondent Louisa Lim tries to find out exactly who's behind them. 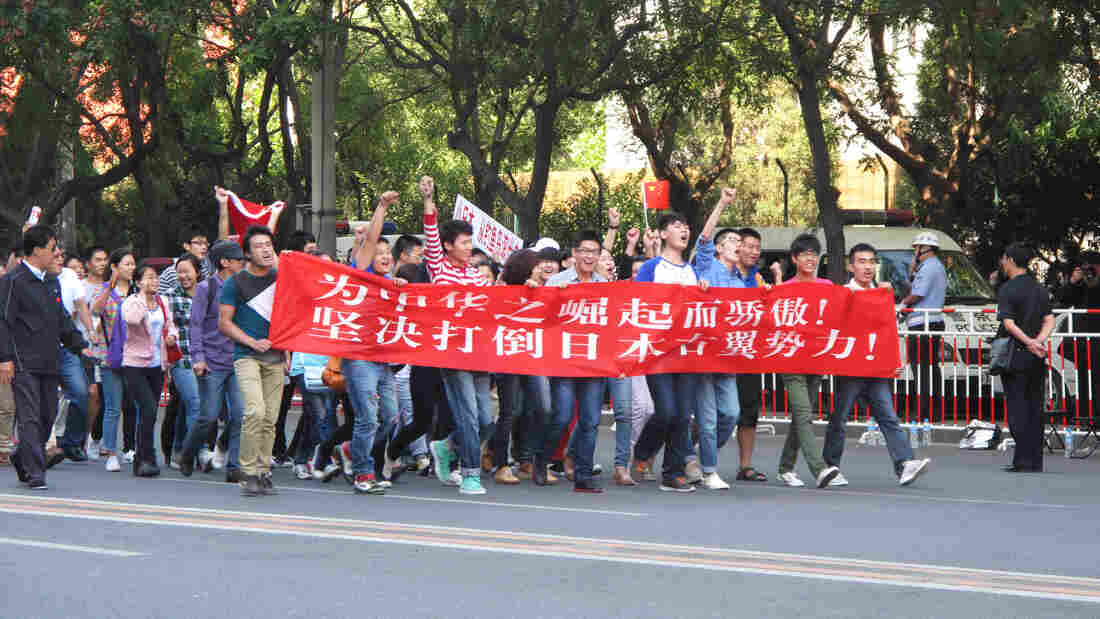 Protesters marched in front of the Japanese Embassy in Beijing today. They carried a banner declaring: "We are proud of China's rise. We resolutely oppose Japan's rightist forces." Louisa Lim/NPR hide caption

China's state-run media is warning that Japan could endure another "lost decade" of economic stagnation should Beijing resort to trade retaliation over Japan's purchase of disputed islands.

The warning comes amid a surge of anti-Japanese nationalism across China that sparked huge and sometimes violent protests over the weekend. As the economic cost of the protests begins to escalate, it's becoming clearer exactly who might be behind them.

Today in Beijing, small groups of protesters marched in front of the Japanese Embassy, its walls still yolk-stained after being pelted with eggs and water bottles over the weekend. The marchers were protesting against Japan's purchase last week of disputed islands known as Diaoyu in China and Senkaku in Japan. Almost all the demonstrators say they came out spontaneously to protest. But an onlooker who gave his name as Mr. Luo lets slip that he'd like to march, but today isn't his day to do so.

"I haven't been organized to demonstrate," the man says. "I'm having the day off. The government controls and organizes the demonstrations. You can't just go if you like. At the very least, there's organization among the universities. There are half a million college students in Beijing. If they all came here at once, it'd be unimaginable." 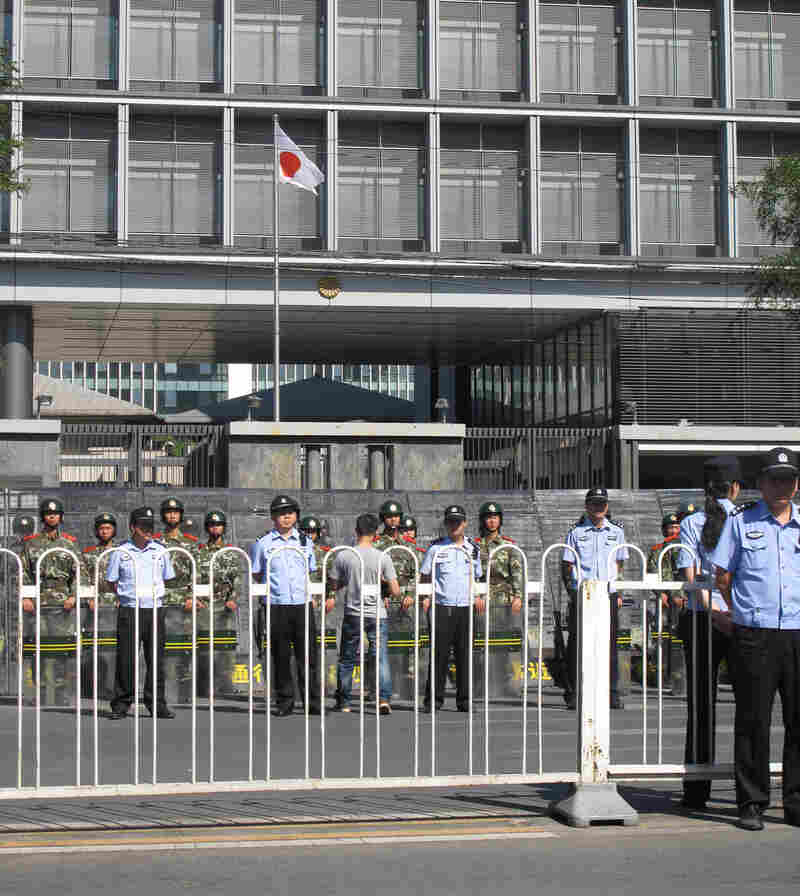 The Japanese flag flies in front of the embassy, whose walls were yolk-stained after being pelted with eggs during weekend protests. Louisa Lim/NPR hide caption

Over the weekend, the streets were lined by young men in matching black T-shirts marked Chaoyang Security. Today, hundreds of people all wearing red armbands marked "public security volunteers" sat perched on low stools about a foot apart on the sidewalks. Phalanxes of riot police armed with shields stood guard before embassy and uniformed policemen, paramilitary police and a host of other security personnel seemed to materialize from nowhere.

All of this points to just how many bodies the Chinese state can mobilize if officials wish to do so.

That much became clear during an encounter with a man draped in a Chinese flag who was watching the protest. "I feel extremely proud to be able to play a tiny role in defending my motherland's sovereignty," he says, drawing the flag around his shoulders.

He refused to give his name, and when he asked me to interview someone else, I pointed out that everyone else around us is a policeman.

"How do you know I'm not a policeman?" he asks.

"Don't ask me that," he says. When I pressed him, he told me to stop making such a fuss about whether he's a policeman. Such an encounter would seem to chime with rumors flying around Beijing that the security forces are sometimes involved in these demonstrations.

Just down the road from the embassy is a street full of Japanese and Korean restaurants.

Many of them have draped Chinese flags as well as huge red banners proclaiming, "The Diaoyu islands are China's" across their facades, sometimes obscuring the name of the restaurant. In this volatile atmosphere, Japanese businesses can find themselves the targets of mob rage, and these restaurants are doing what they can to pre-empt that.

In the southern city of Zhuhai, protestors smashed Japanese shop and car windows over the weekend. Eleven protestors have been detained for violence in Guangzhou.

Chinese Foreign Ministry spokesman Hong Lei has called on demonstrators to behave in a "rational and legal" fashion. At the same time, he sent mixed messages, saying, "The gravely destructive consequences of Japan's illegal purchase of the Diaoyu islands are steadily emerging, and the responsibility for this should be born by Japan."

Whipping up anti-Japanese sentiment could be useful for China's leaders, according to Hu Xingdou, a political analyst at Beijing Institute of Technology.

"There are very intense problems inside China: The gap between rich and poor is very big, there are serious corruption problems, and the contradictions between the people and the government are very intense," Hu says. "Under such circumstances, it could be natural to get people to unite against other countries to strengthen internal unity."

But he warns it could also be dangerous: "I think it's a double-edged sword. Anti-Japanese sentiment could get out of control. In the past, blind anti-foreign patriotism hindered China's progress. Patriotism is often a shelter for political hooligans."

One big test comes tomorrow, the anniversary of the 1931 Mukden Incident that led to Japan's invasion of China. This coincides with a visit to Beijing by U.S. Defense Secretary Leon Panetta, who has expressed concern about the escalation of tensions.

But having unleashed the demons of anti-Japanese nationalism, China may find itself backed into a corner by its own citizens, demanding a harder line on Japan, whatever the cost.