Accessibility links
U.S. Speedskater Accused Of Sabotaging Rival : The Two-Way In court documents, an American Bronze medalist is accused of following instructions and tampering with his competitor's skates. 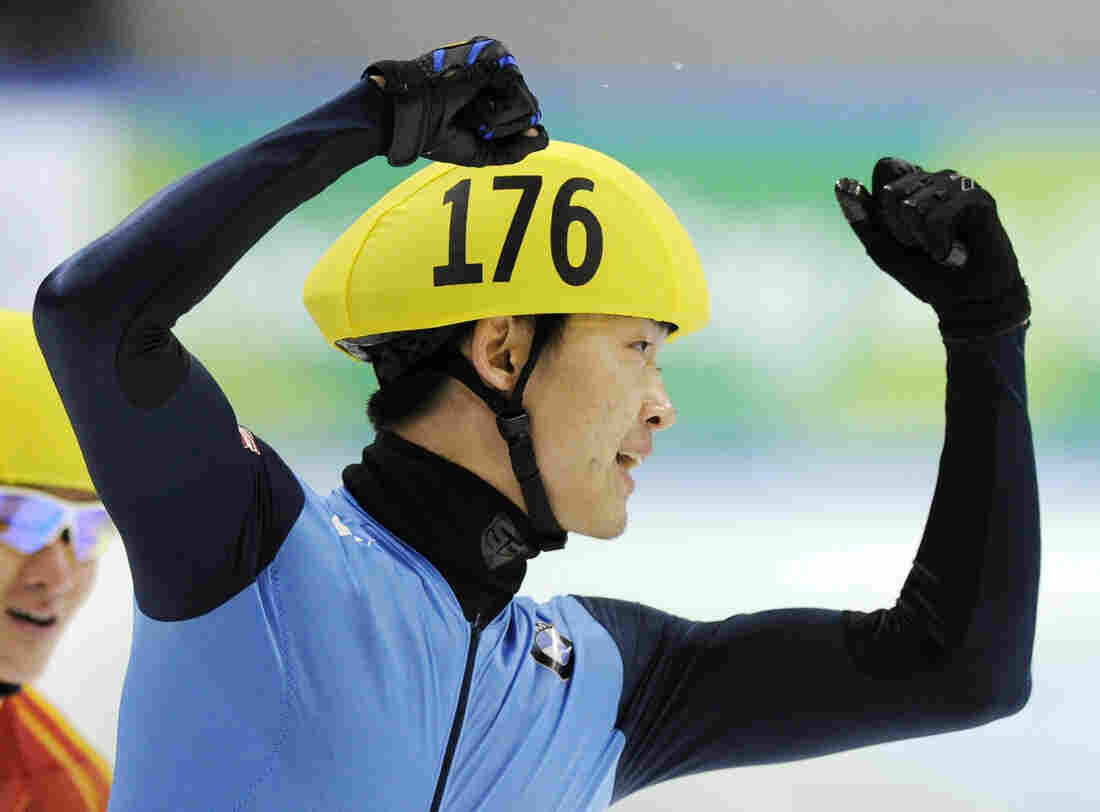 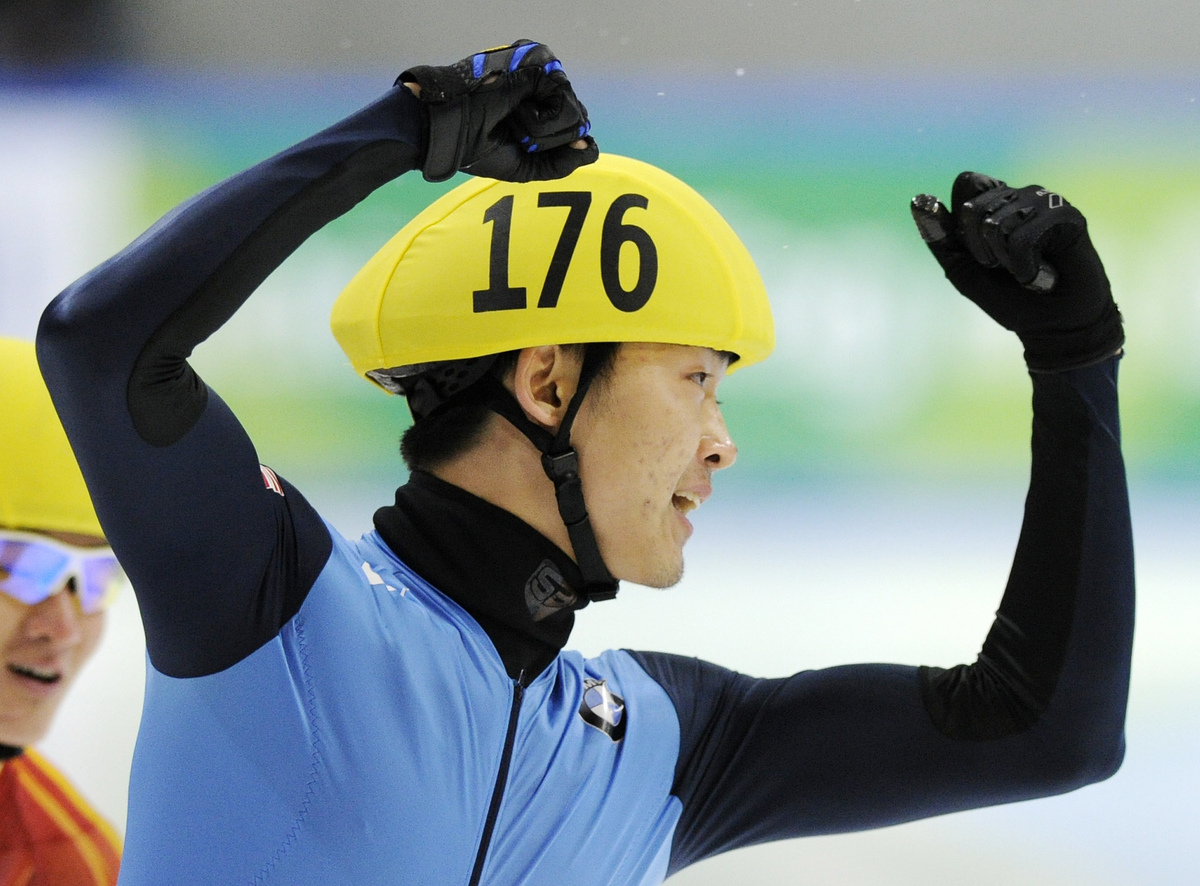 Simon Cho of the U.S. celebrates during the 500 meter men's final race at the Short Track Speed Skating World Cup in Dresden in 2011.

The allegations of physical and verbal abuse at U.S. Speedskating have a new twist: A coach allegedly directed a skater to tamper with the skates of a Canadian competitor at an international competition last year — and the skater complied.

The allegation is contained in a "Demand for Arbitration" obtained by NPR and filed by an attorney for 13 American short track speedskaters who are seeking the dismissal of U.S. Speedskating coaches accused of physical, verbal and psychological abuse. (Note at 9:50 a.m. ET, Sept. 21: An arbitration hearing has now been scheduled; see our update below.)

The document describes a series of conversations, in person and via Skype, between Simon Cho, 20, a bronze medalist at the 2010 Vancouver Olympics, and two unidentified teammates in March of last year and the spring and summer of 2012.

The conversations involve an incident at the World Short Track Team Speed Skating Championships in Warsaw, Poland, in March 2011.

Canadian skater Olivier Jean was forced out of a relay due to a malfunctioning skate. The Canadian team continued the relay with just three skaters and finished fourth in the race.

According to the arbitration document, Cho allegedly told a teammate on the flight home from Poland that head U.S. coach Jae Su Chun told Cho to tamper with Jean's skates. Cho, the document says, then told his teammate he tampered with the blades of Jean's skates.

A spokeswoman for U.S. Speedskating has contacted Cho for NPR and other reporters and says Cho has no comment.

Earlier this year, the document contends, Cho "stated to a number of short track skaters that he 'had done a number of unspeakable things for them,'" referring to Chun and assistant coach Jun Hyung Yeo.

The document describes a series of messages that followed in July. Attorney Edward Williams, who represents the skaters seeking arbitration, says the messages were conveyed in writing via Skype and have been printed out.

"Everyone knew Jae Su was the mastermind behind the situation at World Teams," one message says on July 8.

"Just keep your [expletive] mouth shut and nobody has to get screwed," says a message allegedly sent by Cho on July 9. The same day, there's also this message: "It is my darkest secret and I regret it."

A day later, Cho allegedly wrote, "I know I've done [expletive]-up things. I wish I could take them back. But I can't...and I'm preparing myself for the consequences to come."

NPR has contacted Chun's spokesman for comment but has yet to receive a response. Chun issued a statement Sunday denying the earlier allegations of abuse but admitting to pushing a skater.

These allegations, if true, are the most serious yet involving U.S. Speedskating. They could bring embarrassment to USS and the U.S. Olympic Committee (USOC), which oversees Olympic sports federations in the U.S. There could also be an investigation by the International Skating Union (ISU), which may be forced to reconsider the results of the World Team event if cheating is substantiated.

Teams and athletes found guilty of cheating are also subject to severe sanctions, including banishment from competition.

NPR has contacted the ISU in Switzerland for comment but there is no response so far.

U.S. Speedskating has struggled to raise funds to support athletes despite the fact that long and short track skaters are the biggest source of Olympic medals for Team USA. A scandal doesn't help fundraising.

In a statement, U.S. Speedskating says all of the allegations involving its coaches are being investigated independently by a law firm enlisted by the USOC. Williams confirms that the athletes he represents, who communicated with Cho, have been interviewed by the USS investigators.

It's not clear whether investigators have interviewed Cho or Chun.

The "Demand for Arbitration" is part of a process required by federal law and available to athletes if they believe disputes threaten their ability to compete. Arbitration is an option even when a formal investigation is underway if the athletes believe the investigation won't be completed in a timely fashion.

Williams says his clients worry that their allegations against their coaches will not be resolved before the short track season begins on September 27. The athletes, according to Williams, will refuse to train and compete under the existing coaches, which could threaten their ability to qualify for World Cup and Olympic competition.

Two of the skaters have filed a police report with local officials in Utah, where the athletes and the team are based.

Nine other skaters who are not part of the dispute issued a statement Tuesday strenuously defending their coaches and calling the allegations of abuse "baseless."

As we've reported, Chun was put on leave after the allegations surfaced.

The International Skating Union (ISU), the governing body for short track and other Olympic skating sports, has just issued this statement to NPR:

"The ISU does not comment on any allegation or possible investigation on any ongoing disciplinary matter. In presence of reasonable evidence of misconduct, the ISU has always taken and will continue to take the necessary steps by involving the relevant parties and ISU bodies and by following the procedure stated in the ISU Statutes."

The ISU has a disciplinary commission which will consider complaints filed "within 60 days of learning of the facts or events." Violation of any conduct "which can be disciplinary or ethical by nature" can result in a warning, a fine of up to $16,000, a suspension and/or exclusion for life.

The Canadian speedskater whose skates were allegedly sabotaged by Cho last year has indicated he will not pursue a complaint. "You can't change the past," Olivier Jean told reporters in Montreal Thursday. "I can't waste energy on something that happened two years ago."

Still, ISU rules seem to permit complaints from others affected by the incident. And it appears the ISU itself can take action based on unethical behavior or violations of the group's ethics rules

An arbitration hearing is now tentatively scheduled for Oct. 3-5 in Salt Lake City. Edward Williams, the attorney for the complaining skaters, says the hearing will take place only if the issue is not resolved otherwise by October 3.

An investigation is underway by White and Case, an international law firm based in New York and enlisted by the U.S. Olympic Committee as part of the USOC's SafeSport Program. SafeSport was initiated in 2010 in the wake of a sexual abuse scandal involving coaches and athletes at USA Swimming.

Earlier this week, White and Case issued a statement about its investigation, saying "it is endeavoring to finalize its report promptly." The firm also urged "no rush to judgment until the investigation is concluded."

Williams says the arbitrator who has accepted the case is Jeffrey Benz, a former chief counsel at the USOC and the arbitrator in another case of physical abuse by a South Korean coach working with short track speedskaters in the U.S.

Benz ruled in May that Olympic gold medalist Dong Sung Kim had violated U.S. Speedskating (USS) rules forbidding physical abuse when he coached for private skating clubs in the Washington, D.C., area. USS sought a lifetime ban from coaching. Benz ordered a six-year ban with pre-conditions before returning to coaching, including completion of an anger management program.

Kim is also mentioned in the current complaints and grievances because he briefly substituted as a U.S. Speedskating assistant coach while another coach was away. The documents do not describe any allegations of abuse against Kim.

The October arbitration date means that the short track season will begin next week with the dispute unresolved. Williams says the skaters have vowed to work with private coaches in the meantime.

Canadian skater Olivier Jean told reporters today that he discovered the problem with his skates at the starting line. "We were in a position to win the world team championship title," Jean said. The title "was going to be decided with the relay. After the first lap of the relay, I saw it was impossible for me to skate. One of my blades was broken. At the time we didn't understand what happened. It was hard to explain. We had our suspicions that they were tampered with but we had no proof."

Jean said he was briefly coached by Chun, who allegedly told American Cho to tamper with Jean's skates. "I always had a good relationship with coach Jae Su Chun," Jean said. "I enjoyed training with him."

Jean spoke in French with Canadian media and his comments were translated by Phil Legault of Speed Skating Canada.

Speed Skating Canada issued a statement late Thursday saying the group would not comment until the matter was resolved in "court proceedings."