Accessibility links
NFL : The Two-Way Replacement refs blew it big time last night, most observers agree, when they gave Seattle a touchdown that sent Green Bay to defeat. That's only added to the outrage over what's been going on with the regular refs on the sidelines because of a contract dispute. 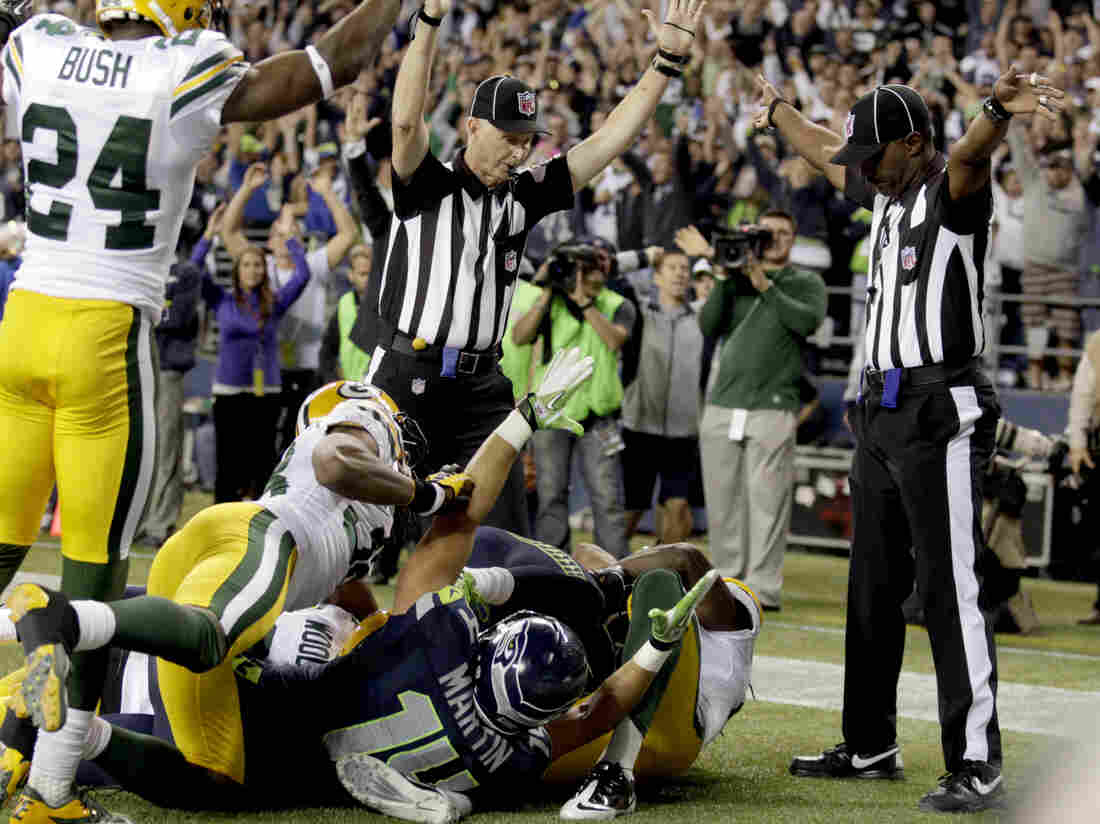 Confusion: One official (to the left) signals touchdown for Seattle. The other signals that a touchback — possession — for Green Bay. Stephen Brashear/AP hide caption 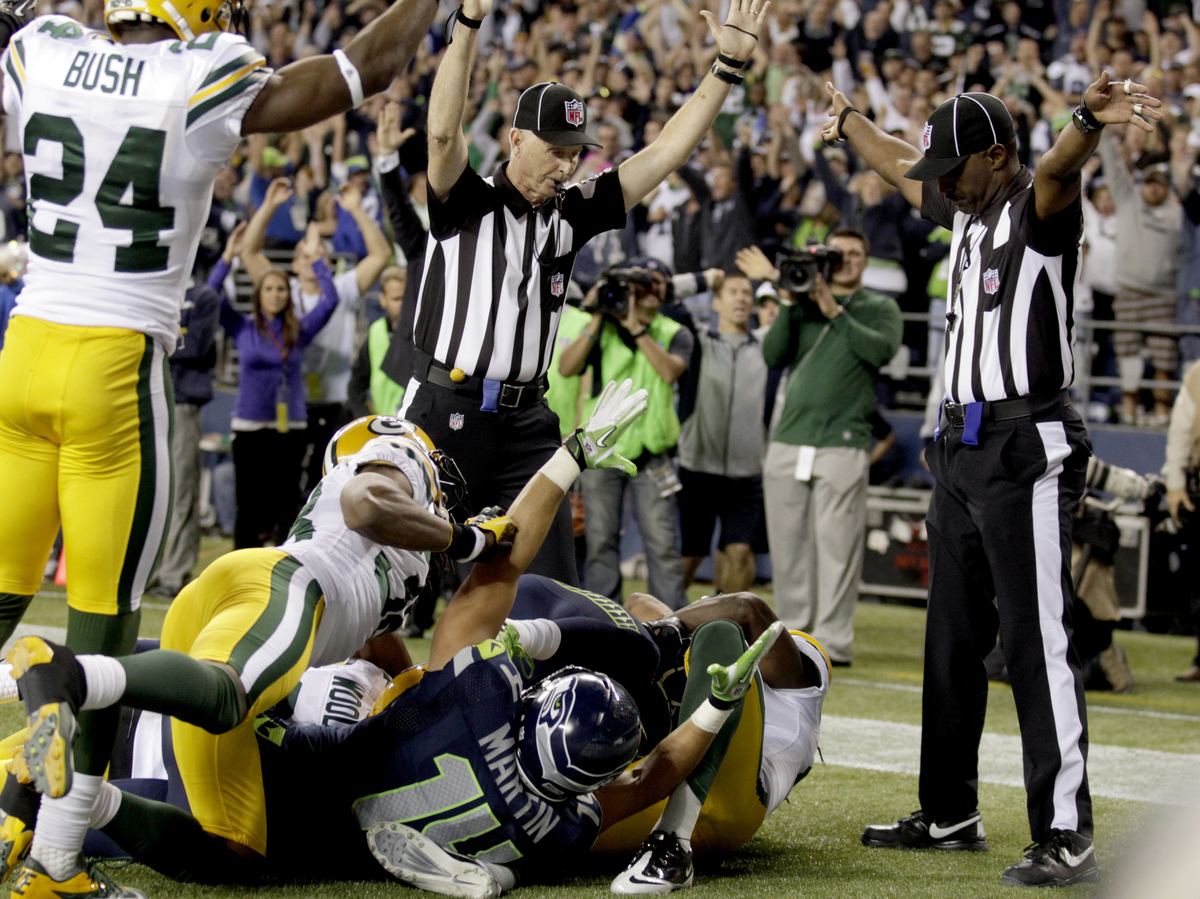 Confusion: One official (to the left) signals touchdown for Seattle. The other signals that a touchback — possession — for Green Bay.

Football fans are furious. Bettors are out an estimated $150 million. Gov. Scott Walker of Wisconsin — the Republican who's famous for battling with organized labor — is on the side of the referees union. And the NFL is in something of a "prevent defense," saying that nothing can be done to change the outcome.

All because of what looks to be one of the worst series of decisions by NFL referees in the league's long history.

Monday night's nationally televised game ended with the refs giving the Seattle Seahawks a 14-12 win over the Green Bay Packers on a call in the end zone that awarded Seattle a touchdown that almost all observers agree the team didn't deserve.

We should say "replacement refs." The league's regular officials have been locked out because of a contract dispute over their pensions and whether they will become full-time employees or stay, officially, as part-timers.

It's the talk of the nation today as fans beg for the league and its regular officials to settle their differences so that the "real" refs can come back. NPR's Mike Pesca will be on All Things Considered later to sort out what's going on. We'll add his report to the top of this post when it's ready.

In the meantime, though, here's the story as of mid-afternoon, from our original post and earlier updates:

It's the play that will live in infamy (NFL.com's word). It ended Monday night's football game between the Seattle Seahawks and Green Bay Packers.

As NPR's David Greene and Tom Goldman said earlier on Morning Edition, the chaotic finish "captures the confusion of this whole three weeks of shoddy officiating" while the league's regular referees have been off the field during a contract dispute and replacements have been trying to take their place.

With time expiring and Seattle behind 12-7, Seahawks quarterback Russell Wilson threw a "hail Mary" pass into the endzone. As players from both teams jumped for the ball, Green Bay's M.D. Jennings appeared to grab it first. But as Jennings fell back to the ground, the Seahawks' Golden Tate got his hands on the ball as well.

Now, the NFL guards its video so we can't embed footage of the play. But you can watch it as many times as you like here, on NFL.com. And it's in that clip, as you'll see, where former NFL coach Steve Mariucci talks about whether maybe — just maybe — the refs got the call right because if two players simultaneously gain possession on a play like that, the "tie" goes to the offense. In this case, Seattle.

But, to come to that conclusion you have to decide that Jennings and Tate got their hands on the ball at the same moment. And to our old eyes, that just doesn't seem to be the case. It looks like Green Bay's Jennings was the first to grab it. Mariucci agrees with us. He also notes that it looks like Tate committed a penalty just before the ball got to the end zone by pushing one of the Packers defenders. That should have ended the play right there, Mariucci argues.

Well, the refs came to the conclusion that it was a touchdown. Seattle won the game, 14-12. Now, football fans and headline writers are in tizzy today.

Twitter is lighting up, with regular Janes and Joes and even some Kings, as in the NBA's LeBron James, registering their outrage. "These replacement refs gotta go man!!," James tweeted early today. "Packers just got game took from them. I LOVE NFL football to much to see this type of work."

ESPN cuts to the chase with this headline: "Replacement Refs Hurting NFL."

Watch the replay if you haven't seen it already. What do you think?

Update at 1 p.m. ET. In Statement, NFL Says Penalty Should Have Ended The Game; But It Didn't; So Seattle Wins:

The league office has now issued its take on what happened and what can be done now. Basically, it says the game should have ended with an interference penalty on Seattle's Tate. But that foul wasn't flagged. And there isn't "indisputable visual evidence" to overturn the decision that the two players had "simultaneous possession" of the ball. So, that decision stands and Seattle is still the winner.

"In Monday's game between the Green Bay Packers and Seattle Seahawks, Seattle faced a 4th-and-10 from the Green Bay 24 with eight seconds remaining in the game.

"Seattle quarterback Russell Wilson threw a pass into the end zone. Several players, including Seattle wide receiver Golden Tate and Green Bay safety M.D. Jennings, jumped into the air in an attempt to catch the ball.

"While the ball is in the air, Tate can be seen shoving Green Bay cornerback Sam Shields to the ground. This should have been a penalty for offensive pass interference, which would have ended the game. It was not called and is not reviewable in instant replay.

"When the players hit the ground in the end zone, the officials determined that both Tate and Jennings had possession of the ball. Under the rule for simultaneous catch, the ball belongs to Tate, the offensive player. The result of the play was a touchdown.

"Replay Official Howard Slavin stopped the game for an instant replay review. The aspects of the play that were reviewable included if the ball hit the ground and who had possession of the ball. In the end zone, a ruling of a simultaneous catch is reviewable. That is not the case in the field of play, only in the end zone.

"The result of the game is final.

"Applicable rules to the play are as follows:

"A player (or players) jumping in the air has not legally gained possession of the ball until he satisfies the elements of a catch listed here.

"A forward pass is complete (by the offense) or intercepted (by the defense) if a player, who is inbounds:

"(a) secures control of the ball in his hands or arms prior to the ball touching the ground; and

"(b) touches the ground inbounds with both feet or with any part of his body other than his hands; and

"(c) maintains control of the ball long enough, after (a) and (b) have been fulfilled, to enable him to perform any act common to the game (i.e., maintaining control long enough to pitch it, pass it, advance with it, or avoid or ward off an opponent, etc.).

"When a player (or players) is going to the ground in the attempt to catch a pass, Rule 8, Section 1, Article 3, Item 1 states:

"Simultaneous Catch. If a pass is caught simultaneously by two eligible opponents, and both players retain it, the ball belongs to the passers. It is not a simultaneous catch if a player gains control first and an opponent subsequently gains joint control. If the ball is muffed after simultaneous touching by two such players, all the players of the passing team become eligible to catch the loose ball."