Accessibility links
Turkey Fires On Northern Syria In Response To Rocket Attack : The Two-Way The city is divided after months of fighting. In the latest attack, dozens were killed in suicide bombings that appear to be the work of rebels. 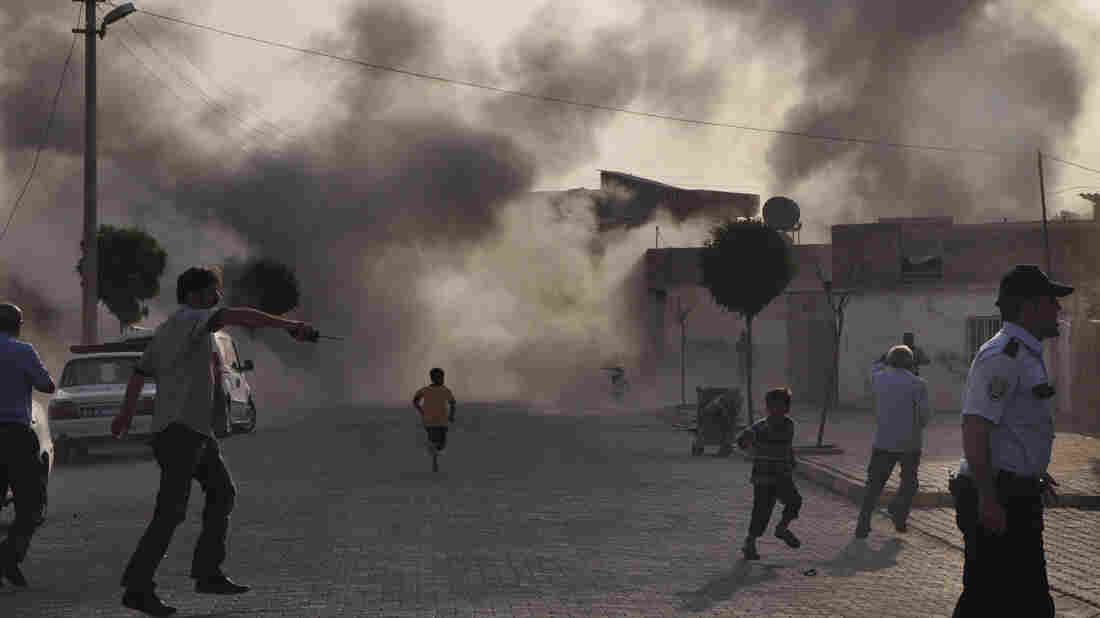 Smoke rises after artillery fire from nearby Syria hits the Turkish border town of Akcakale. Turkey said five of its citizens were killed and that it responded by firing on targets in northern Syria. The episode raised tensions on the already volatile border region. Anadolu Agency/Reuters /Landov hide caption 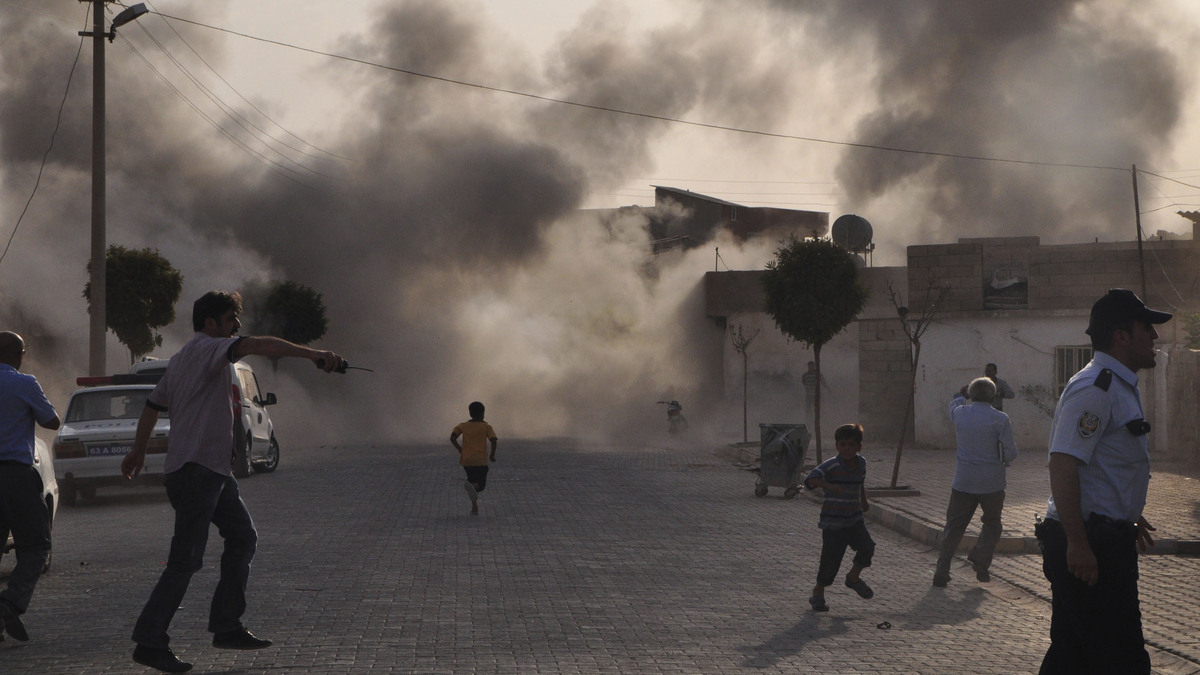 Smoke rises after artillery fire from nearby Syria hits the Turkish border town of Akcakale. Turkey said five of its citizens were killed and that it responded by firing on targets in northern Syria. The episode raised tensions on the already volatile border region.

Update at 3:15 p.m. Turkey Fires Back After Rocket From Syria

Turkey's military has fired on targets in northern Syria in response to a rocket that hit a Turkish village and killed several people Wednesday, the BBC and other news organizations are reporting.

The cross-border shooting could potentially mark a major escalation along the tense frontier.

In a statement, the Turkish government said that the border town of Akcakale came under fire on Wednesday afternoon, resulting in deaths and injuries.

Turkey has become a fierce critic of President Bashar Assad's government and tensions ran particularly high after Syria shot down a Turkish war plane in June.

Since that episode, Syrian government forces have tended to stay away from the border area, and this has allowed the rebels to operate more freely from inside northern Syria.

The Turkish military said that "our armed forces at the border region responded to this atrocious attack with artillery fire on points in Syria that were detected with radar, in line with the rules of engagement."

Five Turks were killed and nine were wounded, according to the military. It didn't give additional details on the victims, but the AP and other news organizations said a rocket killed several family members in one home.

Also, Turkey officials began consultations with the United Nations and NATO in the wake of the shooting.

NPR's Kelly McEvers, who was recently in Akcakale, tells All Things Considered that Syrian rebels recently captured the border crossing at this spot, making it the latest addition to their strongholds along the frontier.

But the Syrian army does not appear to have completely conceded the area.

It was not clear whether the Syrians fired into the Turkish town intentionally or by accident. But Kelly noted this has happened before.

"This isn't the first time the Syrians have shot into Akcakale," Kelly says. "The people of this town are terrified. They've moved away from the border. Local authorities have told them they can't go anywhere near it. Schools have been closed."

Aleppo, which has endured more carnage than any Syrian city in recent months, was hammered again on Wednesday with three suicide car bombings that killed dozens of people and leveled at least one large building.

The fight for the city has left Aleppo split in half, with the government controlling the west and the rebels holding the east.

Wednesday's bombings took place just moments apart and took place in and around the main Saadallah al-Jabiri Square, an area controlled by the government, The Associated Press reported.

The type of attack and the location suggested the rebels were responsible, and Syria's state-run SANA news agency blamed "terrorists," the AP added.

As rescuers searched, the death toll continued to climb. Reuters reported at least 40 dead and 90 wounded.

Aleppo is Syria's largest city and its commercial center. Until a couple months ago, little fighting took place in and around the city. But it became a major battleground this summer.

Over the weekend, hundreds of shops in the city's ancient, covered market were destroyed by a fire touched off by the fighting. Despite the heavy battles, there has not been a conclusive outcome. The same appears true in the larger battle for Syria.

As NPR's Kelly McEvers noted during a recent reporting trip to northern Syria, President Bashar Assad previously "downplayed efforts to oust him as conspiracies by terrorists sponsored by the U.S. and Israel." Now, Kelly says, Assad seems to be acknowledging that "that not only is he fighting for his survival, but that it might not come too easily."