Accessibility links
'Sweatt V. Painter': Nearly Forgotten, But Landmark Texas Integration Case : The Two-Way As the Supreme Court hears a new case involving affirmative action at the University of Texas, some remember a legal battle from 62 years ago that paved the way for Brown v. Board of Education.

The Supreme Court heard oral arguments today in the affirmative action case of Fisher v. the University of Texas at Austin, as NPR's Nina Totenberg will report later today on All Things Considered. 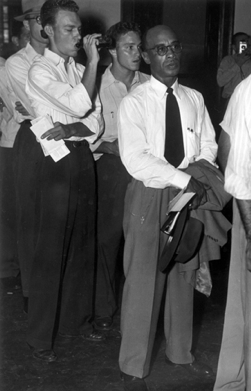 Heman Sweatt in line for registration at the University of Texas in 1950. Dolph Briscoe Center for American History hide caption

But we want to take a moment to remember another landmark case that brought the University of Texas to the Supreme Court 62 years ago.

It led to the end of segregation at the university and paved the way for Brown v. Board of Education four years later, yet these days, it's seldom spoken of, eclipsed by Brown and other events that followed.

The case is Sweatt v. Painter. Heman Marion Sweatt was an African-American mail carrier from Houston. Theophilus Shickel Painter was the University of Texas' president at the time. The history of the case is laid out in an amicus brief filed by Sweatt's family in the case of Fisher v. Texas, and in a book by Gary M. Lavergne, who today works in the University of Texas Office of Admissions. Our summary is based on their work.

On Feb. 26, 1946, Sweatt and Painter, along with representatives from the NAACP and other university officials, met in Room 1 of UT's Main Building. Sweatt presented his college transcript to Painter and asked for admission to the law school. Painter said that the school could not officially accept the transcript for consideration, but that he would seek counsel from the state's attorney general.

In a letter to Texas Attorney Gen. Grover Sellers, Painter wrote: "This applicant is a citizen of Texas and duly qualified for admission to the Law School at the University of Texas, save and except for the fact that he is a negro."

In a response that came several weeks later, Attorney Gen. Sellers upheld the constitutionality of segregation in education, but added that if separate but equal facilities could not be provided, Sweatt must be admitted to UT's law school.

In May 1946, Sweatt filed a case against Painter and the university in the county court. Among those representing him: a lawyer from the NAACP Legal Defense Fund named Thurgood Marshall.

— "Why Heman Sweatt Still Matters," from The Alcalde.

Marshall would go on to build a case around the idea of intangibles. Beyond differences in square footage of classrooms and numbers of faculty, course offerings, and books in the library, a separate facility for black students lacked opportunities to debate ideas with other students, a critical part of learning.

"The modern law school is operated so the student can understand ideas of all stratas of society, so he can go out and be of service to his community, his state and his nation," argued Marshall, a future Supreme Court justice. "You tell [Sweatt], 'You go over there by yourself. You don't have a chance to exchange ideas with anybody.' "

He would take that argument all the way to the Supreme Court.

On June 5, 1950, the court ruled unanimously that under the Equal Protection Clause, Sweatt must be admitted to the university. Chief Justice Fred Vinson referenced intangibles in the opinion:

"The law school, the proving ground for legal learning and practice, cannot be effective in isolation from the individuals and institutions with which the law interacts. Few students and no one who has practiced law would choose to study in an academic vacuum, removed from the interplay of ideas and the exchange of views with which the law is concerned."

Sweatt enrolled at the law school that fall, but dropped out before completing his second year. His family cites the toll that his case had taken on his health as well as a failing marriage. He later earned a masters degree in social work from Atlanta University and went on to have a career with the Urban League. Sweatt died in 1982.

There are echoes of the Sweatt case and the subject of intangibles in Fisher. The university is arguing today that a diverse student body promotes a robust exchange of ideas, and that in turn helps prepare students for a future in which they'll encounter people of all backgrounds.

Still, on the university's campus in Austin, ask about Heman Sweatt, and you often get blank stares. African-American students are by far the most familiar with his case.

Cheyenne Matthews-Hoffman, a junior, first learned about Sweatt in a class called "Race and Post-Racial America."

"I wish he were a bigger deal. I don't think a lot of students know about him," says Matthews-Hoffman, a journalism major and editor-in-chief of Blank Ink, an online magazine that's soon to launch. "Especially black students should learn their history about UT's race relations ... what happened here, how much we've progressed."

Kristin Thompson, a fifth-year civil engineering major and a past president of the Black Student Alliance, says"it's like 'Being-a-Minority-at-UT 101.' ... It's very much a part of our existence here. We use [Sweatt's story] within our community to help students understand and appreciate the opportunities that have been given to them."

Every year, the university holds an annual Heman Marion Sweatt Symposium on Civil Rights, and in 2005, the Travis City Courthouse, where Sweatt first filed his case, was renamed in his honor.

"In my opinion, Sweatt v. Painter is one of the most important constitutional law cases in modern times," says Gregory Vincent, a professor of law and vice president of UT's Division of Diversity and Community Engagement. "Without the Sweatt v. Painter case, you don't get the critical building block to Brown v. Board of Education. It is a case that really helped put one of the final nails in the coffin of state-sponsored segregation and to overturn Plessy v. Ferguson."

Heman Sweatt, he says, is a hero and a part of the fabric of the University of Texas at Austin.

(Andrea Hsu is an All Things Considered producer.)