Accessibility links
On Court Order, Boy Scouts' Confidential 'Perversion Files' Go Public : The Two-Way The files give the public a first glance at how the Boy Scouts of America handled allegations of sexual abuse. In some cases, they show that alleged child molesters were able to sneak back into the Scouts; in other cases, they show the Scouts neglected to refer allegations of abuse to law enforcement authorities.

A Boy Scout salutes traffic as he stands next to a flag display on a freeway overpass September 11, 2008 in Lafayette, California. Justin Sullivan/Getty Images hide caption 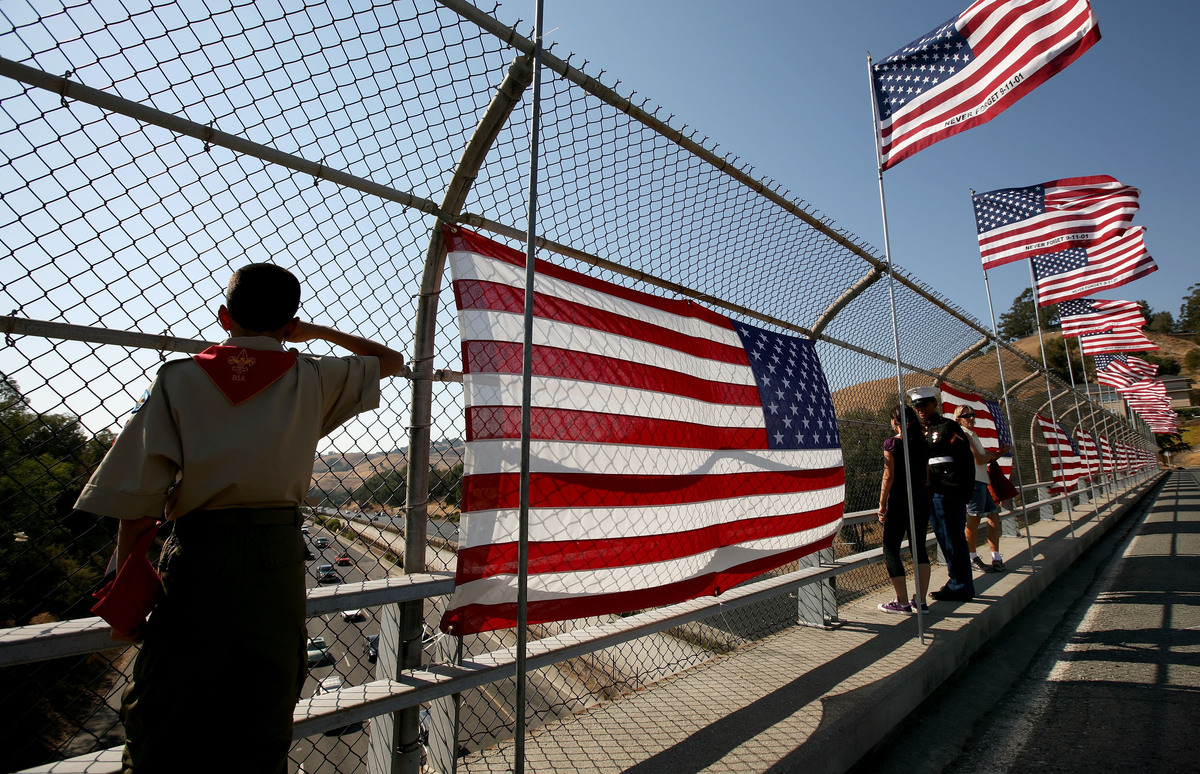 A Boy Scout salutes traffic as he stands next to a flag display on a freeway overpass September 11, 2008 in Lafayette, California.

On orders from the Oregon Supreme Court, more than 1,200 confidential files the Boy Scouts of America kept on suspected child molesters from the 1960s through 1985 have been made public.

Commonly referred to as the organization's "perversion files," they give the public a first and intimate look at how the Boy Scouts handled allegations of sexual abuse. In some cases, they show how some volunteers were booted from the organization, then snuck back in, only to be kicked out again when parents or scouts made allegations of sexual abuse.

The Los Angeles Times has had access to some of these files for months, after they were handed to them by a "Seattle attorney." One of the most stunning revelations the paper uncovered is that the files show Scouts "failed to report hundreds of alleged child molesters to police and often hid the allegations from parents and the public."

Throughout the day, we'll explore these files, bring you specific narratives about them and we'll also point you to reporting from around Web. What follows is a quick, bulleted guide to all the pieces in this real-time, updated post. The links will take you to other news outlets or other portions of this post that will give you a fuller explanation:

-- In a statement, the Scouts defended their system of identifying child abusers and protecting children from them. Wayne Perry, the organization's national president, however, also apologized to the victims and their parents where the organization may have failed.

-- Why were these files released? They were used in a 2010 trial over the abuse of six boys in a troop in Portland, Ore. The New York Times reports that resulted in an $18.5 million punitive judgement against the Scouts. Media organizations, including Oregon Public Broadcasting, sued for the files to be made public and a judge agreed saying they should "be released to the public under the open records provision of the Oregon Constitution."

-- "Child abuse thrives in secrecy. The secrets are out," attorney Kelly Clark said during a press conference. Clark's law firm was the one that released the documents and won the $18.5 million judgement.

Clark and his partners said that what they want out of the release of these documents is assurance from the Boy Scouts that child abuse is no longer happening. In fact, he said, they are asking Congress to commission an audit of the organization's child abuse policy.

-- The Los Angeles Times has built a searchable database that includes the vast number of files, including some from more recent years that are not part of this release.

-- In the file of one Indianapolis volunteer, we find an example of a man who was allowed back into the Scouts after receiving counseling. During his second go around, he admits to taking "liberties" with a 14- and 15-year-old boy and the Scouts decided not to refer the case to authorities.

NPR's Tovia Smith filed a report about the release for All Things Considered.

She spoke to Helen Caldwell, whose son sued the Scouts and was among those who won the $18 million settlement.

"I become speechless," she said about seeing the files. "I'm so full of rage about it — even to this point. I mean when does it end?"

Tovia also provides a different view on all of this. She spoke to University of Virginia professor Janet Warren, who was paid by the Scouts to review the files.

She said that in the context of the era, the Scouts were doing more than most in an attempt to keep out child abusers.

"I just see it being such a good faith effort," Warren said. "They were like 80 years ahead of their time. I don't see bad intent."

The Scouts also defended keeping the files confidential. Part of the reason, said the Scouts president Wayne Perry, is that the Scouts want to act without having to meet some threshold.

The Boy Scouts of America sent reporters a news release in which they say that under current policy, "it is mandatory that any good-faith suspicion of abuse is immediately reported to law enforcement."

The Scouts point out that in the files released today "police were involved in nearly two-thirds (63 percent) and a majority of these files (58 percent) included information known to the public."

Update at 2:25 p.m. ET. The Case Of An Indianapolis Volunteer:

In file number 1482, we find echoes of the Catholic Church scandal and the Penn State scandal.

The records show that an Indianapolis volunteer was added to the "perversion files" in the 1970s. That same decade, his file was destroyed "on the strength of recommendation of a psychologist and his pastor or spiritual leader."

For about two years, he was on probation but was considered "out of the woods."

In 1982, parents of two boys, age 14 and 15, complained that the volunteer had improperly touched their children during a camping trip.

Scout officials "discussed the matter with the ... prosecutor's office without revealing the name of the adult or the organization."

"In the course of the meeting, it became apparent that they had a great appreciation for [the volunteer's] fine and dedicated work with Scouting and would prosecute only if it were the only way he could get needed treatment," the confidential file reads.

The memo goes on to say that when Scout officials spoke to the parents of the alleged victims, they were not told that the volunteer had faced previous allegations of misconduct, "because it was confidential and would be prejudicial to the case."

The file notes that the parents wanted to take the case to law enforcement authorities, but the Scouts seem to try to convince them otherwise. Eventually, the parents relent and the volunteer admits guilt in a signed affidavit.

According to the file, the Scouts don't refer this case to authorities, instead they simply add the volunteer to the "perversion files."

One volunteer was removed from a Scout troop in Stockton, Calif. in 1983, after pleading no contest to "lewd conduct and child molesting."

The volunteer, however, joined a troop in Arizona in October of 1987. He "resigned" in June of 1988 after allegations that he was "attaching himself" to certain boys. At that time, the Scouts also seemed to realize that the volunteer appears to be the same volunteer that was kicked out in California.

Lawyers met with the volunteer in June of 1988. In that record, they also detail that the volunteer had been accused of "improper behavior on a camping trip and was removed from leadership by the Red Mountain Methodist Church."

The Boy Scouts of America released a statement in which they apologize for the instances in which they have let victims and family down.

"There have been instances where people misused their positions in Scouting to abuse children, and in certain cases, our response to these incidents and our efforts to protect youth were plainly insufficient, inappropriate, or wrong. Where those involved in Scouting failed to protect, or worse, inflicted harm on children, we extend our deepest and sincere apologies to victims and their families."

But the system has been improved and it works, Perrry said.

"Experts have found that the BSA's system of ineligible volunteer files functions well to help protect Scouts by denying entry to potentially dangerous individuals, and Scouting believes they play an important role in our comprehensive Youth Protection system," Perry said.