Accessibility links
Google's Stock Drops After Premature Release; 'PendingLarry' Goes Viral : The Two-Way The company's third-quarter earnings news, which isn't so great, was mistakenly posted hours before it was supposed to be made public. Now, the release's note that it's "PENDING LARRY QUOTE" has folks making fun of what it is CEO Larry Page might want to say.

Google's stock fell like an Austrian skydiver this afternoon after the Securities and Exchange Commission posted the company's third-quarter earnings news several hours before it was supposed to be on the Web. Somebody apparently screwed up and hit publish even though the news was supposed to be held until after the stock markets close in New York at 4 p.m. ET.

The search engine giant's shares were trading around $687 each — down about 9 percent — before trading was temporarily halted just before 1:30 p.m. ET.

The news in the release isn't so great. Google's "profit declined 20% as total costs jumped and advertising prices continued to slide," as The Wall Street Journal reports.

And then there's this embarrassing issue: An ALL CAPS note at the top of the release says "PENDING LARRY QUOTE." Larry, of course, is Google CEO Larry Page. The line about him has already inspired creation of @pendinglarry on Twitter, which is having much fun with what it is Page "might" be meaning to say, including: 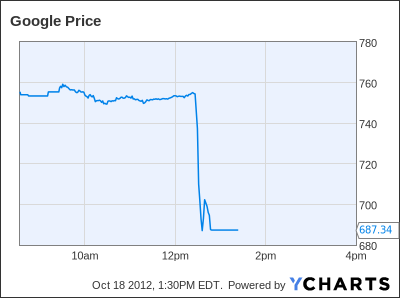 -- "To be fair, we released our earnings yesterday afternoon on Google Plus."

-- "Wanted to get it out there before Kara Swisher 'scooped' us. How's it feel now, Kara?!"

Update at 3 p.m. ET. One More From @pendinglarry:

-- "You guys, that SEC filing was a beta release."