Accessibility links
Florida's 'Mystery Monkey' Captured After Three Years On The Lam : The Two-Way The rhesus macaque monkey had been on the loose in the Tampa-St. Pete area. He'd become a local legend. But recently, "Cornelius" bit a woman. Wildlife officials staked out a neighborhood Wednesday, and managers to tranquilize him. They plan to send him to a sanctuary.

Florida's 'Mystery Monkey' Captured After Three Years On The Lam

Florida's 'Mystery Monkey' Captured After Three Years On The Lam

The "mystery monkey" who had been on the loose in the Tampa Bay area for more than three years was captured Wednesday, our friends at WUSF report.

As WUSF's Scott Finn writes, the rhesus macaque monkey had become something of a local legend in Tampa and St. Petersburg. He'd also made the national news and had "his own" Facebook page (latest update there: "my freedom has been taken away from me"). 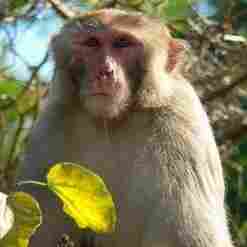 The "mystery monkey," now known as Cornelius, while he was on the loose in 2010. Mystery Monkey of Tampa Bay Facebook page hide caption

It's thought, as WTSP-TV says, that he "escaped from a small colony of monkeys" that live in Silver Springs, Fla. For much of his time on the lam, the monkey was a popular guy. But as Scott notes, "the lighthearted story became more serious earlier this month, when the mystery monkey bit a woman in her backyard after jumping on her back." Neighbors had reportedly been feeding him.

He was captured, according to WTSP, after "a three-hour stakeout" by wildlife officials near "a wooded area in a south St. Pete neighborhood." When the monkey was spotted, he was shot with a tranquilizer dart.

Now, according to the Tampa Bay Times, the monkey has been "placed in quarantine. ... If his health checks out, he could be sent to a sanctuary to be with other monkeys."

The woman he bit, 60-year-old Elizabeth Fowler, tells the Times she knows the monkey needed to be caught, but is still sad that he's leaving the neighborhood. "I feel kind of guilty," she tearfully said.

Officials have given the monkey a name: Cornelius, one of the characters in Planet of the Apes.

Stephen Colbert, by the way, has been on this story from the start.

Florida, of course, has been a good source of interesting animal-related news for us recently: "Mystery Solved: 'Softball-Sized Eyeball' Likely Belongs To A Swordfish."