Accessibility links
Keeping Sandy's Economic Impact In Perspective : The Two-Way As the massive cleanup begins, business owners, workers and investors are wondering what impact the megastorm ultimately will have on their wallets. Did Sandy weigh down economic activity enough to drown the recovery? Or will the rebuilding efforts boost growth over the longer term? 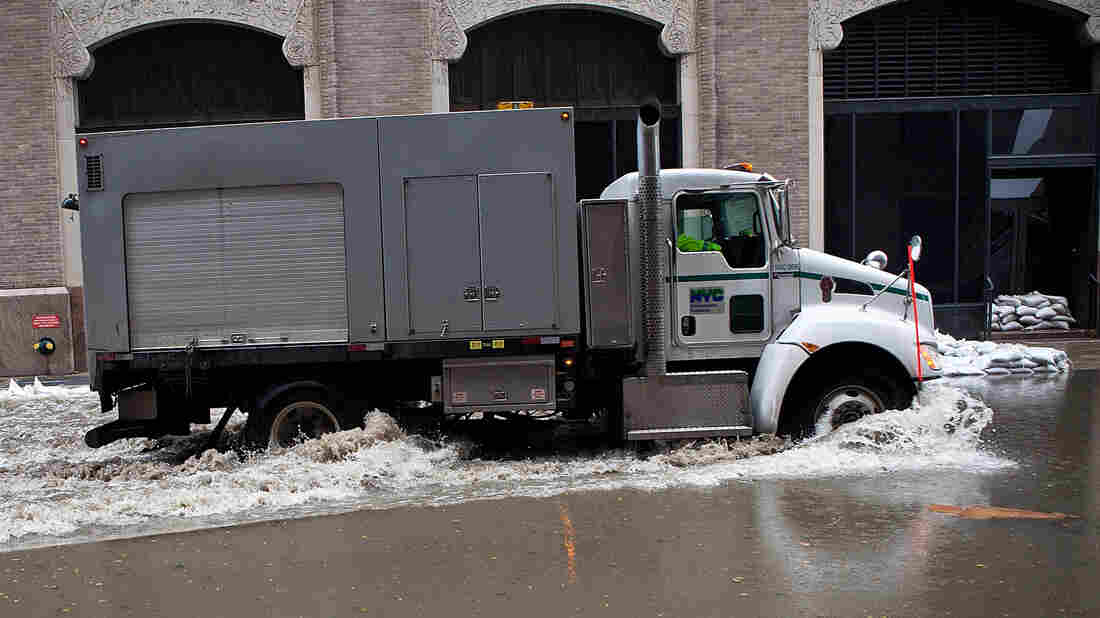 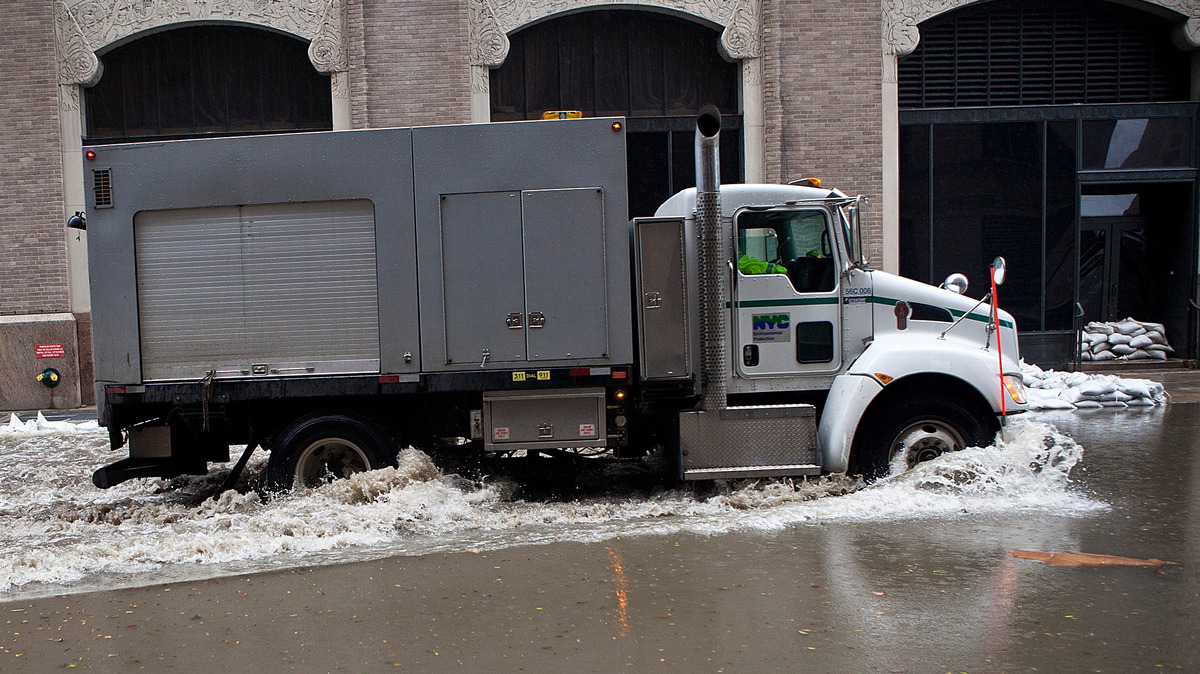 A truck drives through a flooded street caused by Hurricane Sandy in New York City's Financial District on Tuesday.

When Superstorm Sandy slammed into the East Coast on Monday, the fragile U.S. economy was just sitting there, stuck in a sluggish-growth mode.

Now, as the massive cleanup begins, business owners, workers and investors are wondering what impact the megastorm ultimately will have on their wallets. Did Sandy weigh down economic activity enough to drown the recovery? Or will the rebuilding efforts boost growth over the longer term?

Economists say Sandy's negative effects will be huge, but the U.S. economy is enormous. On Tuesday, the emerging view held that once all of the costs are counted up, Sandy will have had a big and bad impact, but not one large enough to reverse the slow-moving recovery.

IHS Global Insight, a forecasting firm, estimates that the megastorm's costs — including interruption of business activity and damage to infrastructure — will total $30 billion to $50 billion.

That's a big number, but much lower than the one for Hurricane Katrina, which caused around $120 billion in damages. And on a national scale, $30 billion to $50 billion in economic losses would represent just about 0.2 percent to 0.3 percent of gross domestic product. That would knock the economy's current 2 percent growth rate back to where it was this summer, but it would not kill the recovery.

In such a listless economy, where roughly 12 million people are seeking work, that dip would be unwelcome. "The effect on growth for the fourth quarter will not be catastrophic but might still be noticeable, especially in an economy with little momentum anyway," IHS economists Gregory Daco and Nigel Gault wrote in their analysis of Sandy's impact.

Without question, the storm's rampage will be a huge negative for millions of individuals, from cruise operators to waiters who will never get the tips lost during the storm and subsequent power outages.

Here are some estimates for the storm's negative impact:

-- As of Tuesday morning, about 8.1 million customers were without power in the affected areas, the U.S. Department of Energy said. That means millions of people couldn't get ready for work in the morning, or their place of employment was shut down.

-- IHS said Sandy idled about 70 percent of the East Coast's oil refineries, and with supplies already tight before the storm, gasoline prices could go up. But oil futures were little changed Tuesday afternoon and gasoline futures sank on speculation that the storm will cut demand as drivers stayed home and businesses were closed, Bloomberg News reported.

But a megastorm can also have positive impacts as rebuilding begins. Here are some potential upsides:

-- Roughly $10 billion in public infrastructure was damaged, the IHS economists estimated. That means state and local governments will have to hire more workers — or give them longer hours — to repair the roads, bridges, beaches and airports that were damaged.

-- And widespread power outages mean that grocery stores will see a short-term benefit once residents restock their refrigerators after throwing out spoiled food. And that's on top of the supplies people bought to get ready before the storm hit.