Accessibility links
Bloomberg Businessweek's Cover: 'It's Global Warming, Stupid' : The Two-Way The cover is the latest sign that the issue of climate change is back in the spotlight. New York Gov. Andrew Cuomo was the first to thrust it there when he connected Sandy to global warming.

Climate change is one of those important topics that has remained under the radar this election cycle.

Without a doubt, Superstorm Sandy has brought it back to the spotlight. That's evident when New York Gov. Andrew Cuomo linked Sandy to global warming.

But perhaps the most undeniable symbol that the controversial topic is on the table in a big way, right now, is to look at the latest cover of Bloomberg Businessweek, the magazine that bears the name of New York City Mayor Michael Bloomberg. 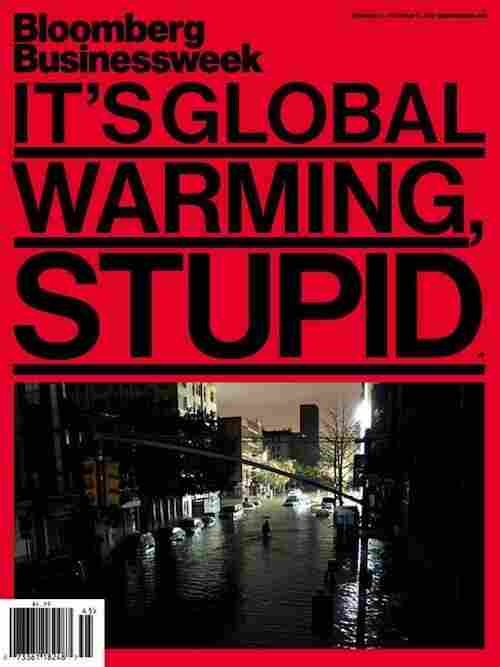 It reads in all caps: "It's Global Warming, Stupid." Below the headline is a picture of a darkened and flooded Lower Manhattan.

The magazine admits that making assumptions about climate because of one weather event is folly. But Hurricane Sandy is an unprecedented, earth shattering event, they say, and there is no more denying that climate change is real and it's serious.

"An unscientific survey of the social networking literature on Sandy reveals an illuminating tweet (you read that correctly) from Jonathan Foley, director of the Institute on the Environment at the University of Minnesota. On Oct. 29, Foley thumbed thusly: 'Would this kind of storm happen without climate change? Yes. Fueled by many factors. Is storm stronger because of climate change? Yes.' Eric Pooley, senior vice president of the Environmental Defense Fund (and former deputy editor of Bloomberg Businessweek), offers a baseball analogy: 'We can't say that steroids caused any one home run by Barry Bonds, but steroids sure helped him hit more and hit them farther. Now we have weather on steroids.'"

Our friend Adam Frank, an astrophysicist, took on the issue on his blog 13.7.

He notes that scientists have always been reticent to talk about the broader implications of a single, freak weather event. He notes that some scientists, however, have more than 90 percent confidence that heat waves, for example, have been amplified by human influence.

There's a lot more from Adam in that piece, so we encourage you to read it, but here is his bottom line:

The science of climate attribution is very exciting and full of cool, new ideas. It has already provided us with first steps towards more precision in understanding how climate change is changing climate now, already. For hurricanes, however, sticking to the science means it is still hard to point to an individual storm and say, yes! Climate change! A more reasoned approach is to take the full weight of our understanding about the Earth and its systems and go beyond asking if any particular event is due to global warming or natural variability. As Kevin Ternbeth of NCAR says 'Nowadays, there's always an element of both.'"

And it seems that all of this is not lost on the American public: As The Huffington Post reported in October, surveys have found that a growing majority of Americans "see a link between global warming and weather events."