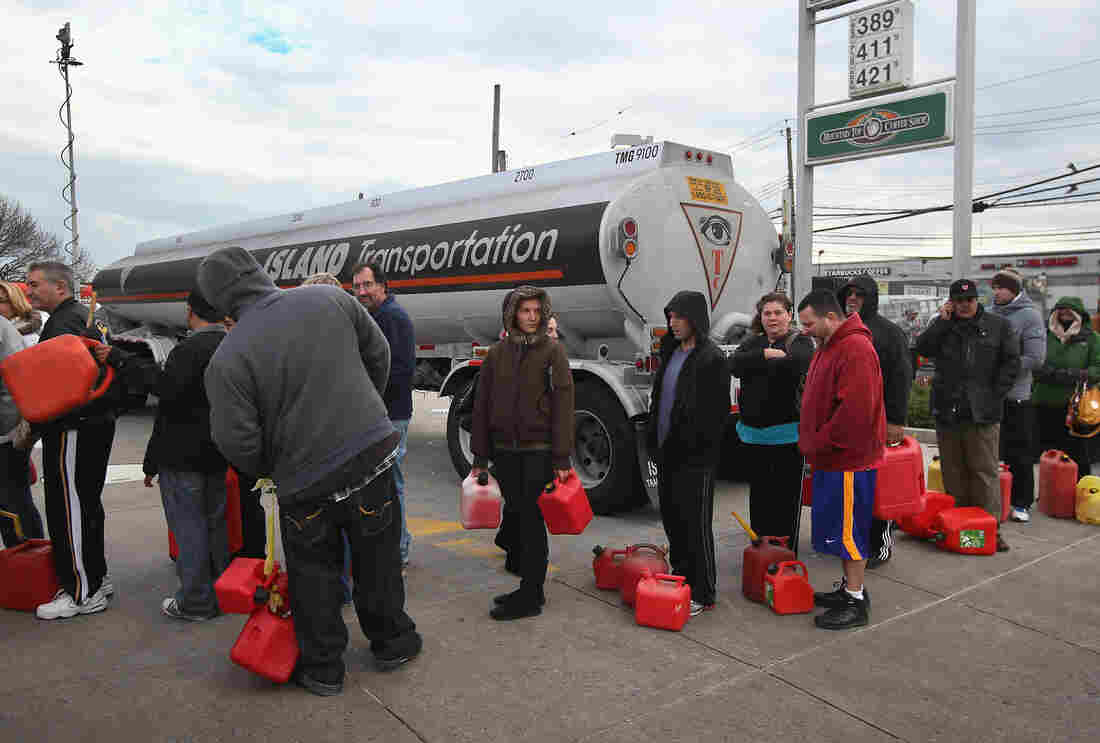 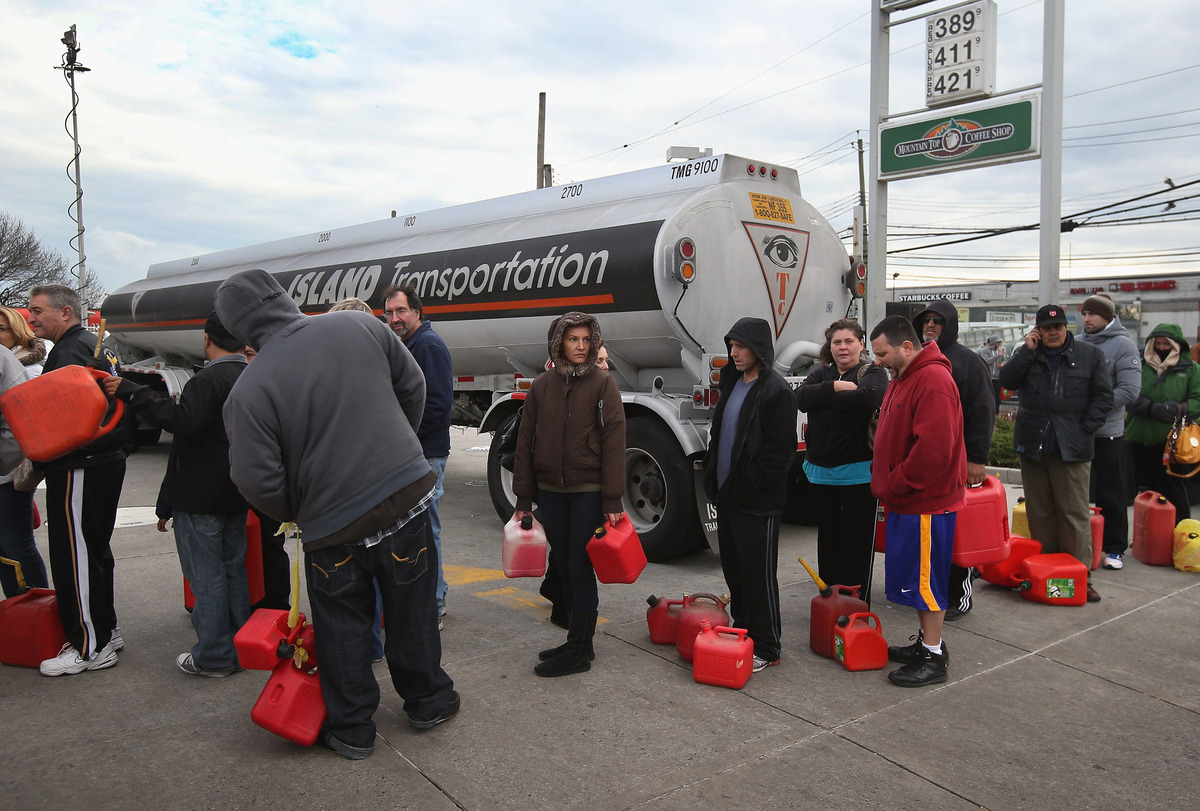 Parts of New York were also suffering fuel shortages, including Staten Island, where there were long lines for gas Friday.

New Jersey Gov. Chris Christie said he is unsure how long restrictions on the sale of gasoline that began at noon on Saturday will last. The gas rationing in 12 New Jersey counties was enacted after Christie signed an executive order Friday night.

The New York Times reports that the biggest hindrance for the state's gas stations was power, not supply, at this point. Outages have hamstringed the distribution system and closed many individual gas stations, resulting in long lines of customers desperate for fuel.

In New York City, Mayor Michael Bloomberg told New Yorkers that the city would get through the disaster, the AP reports, but he was quick to add that he didn't "want anyone to think we're out of the woods yet."

New York Mayor Michael Bloomberg updated the city on recovery efforts from Superstorm Sandy on Saturday afternoon. He assured New Yorkers that the city would recover, but that they weren't "out of the woods" just yet.

Bloomberg also criticized the Long Island Power Authority, which provides power to the Rockaways in Queens. He said the utility had not worked hard enough to restore power in the hard-hit neighborhood and that the authority could not give him a timetable for when it would be restored.

"In our view, L.I.P.A. has not acted aggressively enough," Mr. Bloomberg said. "When it comes to prioritizing resources, we think they should be first in line."

After long lines formed at mobile gas stations in New York City, the AP reports, the state Division of Military and Naval Affairs issued an advisory asking the public to stay away until more fuel is released in order to let first responders get their gas first.

FEMA also activated its Transitional Assistance Program in New York and New Jersey. The program is designed to allow eligible survivors who are in shelters but can't return home due to storm damage to stay in participating hotels until housing is available.

Those who need assistance can call FEMA at 1-800-621-FEMA or register online.

Five emergency mobile gas stations were being deployed around New York City by the military on Saturday, offering 10 free gallons per person. The stations will also supply emergency service vehicles with fuel.

Initial reports from the AP describe "chaos" at an emergency station in Brooklyn and a line of cars 20 blocks long at a station in Queens.

As we reported earlier (below), widespread power outages in the wake of Hurricane Sandy have knocked out fuel distribution networks and forced officials in New Jersey to ration gas in parts of their state.

On Friday, officials canceled the New York City Marathon for the first time in its history as it became apparent that, in Deputy Mayor Howard Wolfson's words, "the people who were suffering the most were looking upon this as a source of unhappiness."

New York Gov. Andrew Cuomo had news of progress on Saturday, however, reporting that power was reaching about 60 percent of the New York City metro area. Still, as many as 900,000 people were without power, including 550,000 on Long Island.

Gov. Cuomo also said that as much as 80 percent of the New York City subway system was in service Saturday.

Customers in Manhattan were nearly all back on the grid, with The New York Times reporting only about 5,800 customers lacking power.

NJ.com says power had been restored to 1 million customers in that state since the storm hit, reducing the number without power from 2.4 million last Tuesday to 1.4 million on Saturday.

Power outages have crippled the distribution system and closed many individual gas stations, resulting in long lines of stressed-out customers. NJ.com reports that the situation has echoes of the fuel crises of the 1970s:

"The frustrating focus on finding fuel after the storm has been aggravated by the lack of electricity that helps station employees to keep pumping gas. It has also led to lines that meander on down major Monmouth streets and highways, mirroring the remembered fuel crisis of the 1970s. Ultimately, the grim search for gas has pushed the limits of civilians and law enforcement personnel alike, testing people's politeness in the face of a serious situation."

The rationing ordered by Gov. Christie mandates odd-even fuel sales in Bergen, Essex, Hudson, Hunterdon, Middlesex, Morris, Monmouth, Passaic, Somerset, Sussex Union and Warren counties. The last number on a car's license plate determines which day it can by fuel: odd numbers buy on odd days, even on even days.

NJ.com also reports there are no restrictions on filling up gas cans. The director of a trade group representing gas retailers predicts in the same story that gas distribution will be nearly back to normal by the end of the weekend.

"The Federal Emergency Management Agency said Friday that President Barack Obama has directed the Defense Logistics Agency to handle the purchase of the fuel. It will be transported by tanker trucks and distributed throughout New York, New Jersey and other communities impacted by the storm."

With nerves also fraying over the search for fuel in New York, Gov. Andrew Cuomo signed his own executive order Friday intended to get gas flowing again. Silive.com reports:

"On Friday, Gov. Andrew Cuomo said he signed an executive order waiving New York's requirement that fuel tankers register and pay a tax before unloading. The move will speed up deliver[y] of gas to customers, said Cuomo, adding that tankers are making 'great progress' delivering fuel to distribution centers.

"The governor said there's 'no reason to panic.' "